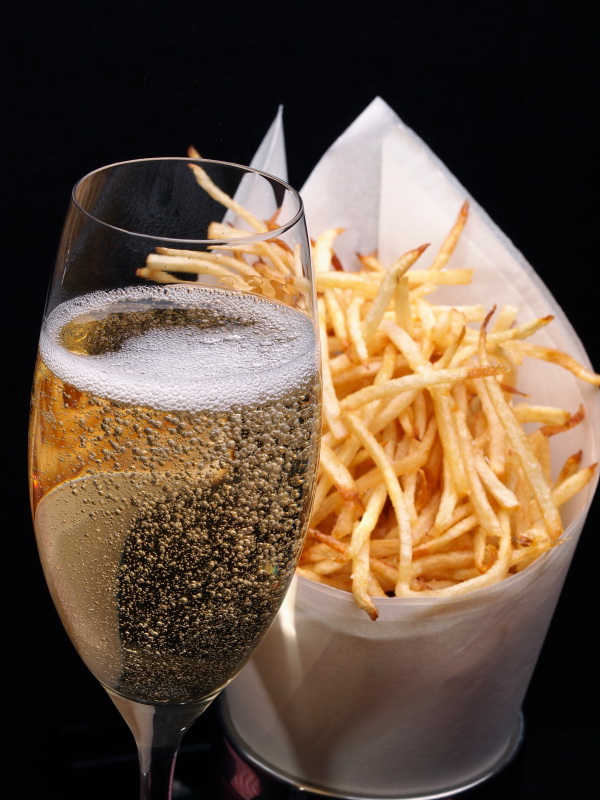 Knowing that saffron-flavored mille-feuille of red mullet and langoustine pairs perfectly with Dom Perignon, or that prime fillet of Kobe beef with braised oxtail and potato rosti will make Château Pétrus sing is useful if you have a fat trust fund and a kitchen staff of twenty.

But when most of us are racing from work to soccer practice to ballet class and then home again, we’re far more apt to grab some take-out food or heat a frozen TV dinner than to prepare a multi-course dinner every night of the week.

We’re more aware than ever of health issues such as trans fats and too much salt, but most of us still eat fast food now and again. The California-based Wine Market Council reports that although U.S. wine consumption has increased 20 percent in the last five years, only 42 percent of drinkers say that they have wine with take-out food. 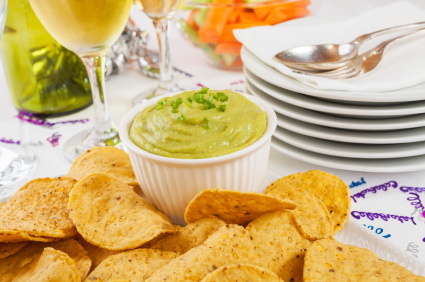 North American sales of frozen dinners have tripled over the last six years: almost 70 percent of us partake of them, and the heavy users among us are chowing down on at least one a week.

NPD Group, a Toronto-based food services research firm, found that two-thirds of Canadians ate in a licensed chain restaurant at least once every two months. With all those meals, only seven percent of us ordered wine.

Perhaps that’s because 45 percent of us believe that wine makes a meal seem more formal. But whether you’ve slaved over dinner for hours or just phoned to order it, the guidelines for pairing wine and food remain the same—harmonize flavors and textures.
Fast Food Wines

If it seems strange to drink wine with fast food, consider that many wines today are actually made to be consumed immediately—or at least within a year or two of purchase—and most don’t improve with age.

They’re the fast foods of the wine world created with what amounts to a drive-through philosophy: they’re consistent, dependable, and modestly appealing in taste.

Unlike more complex wines designed for cellaring, they don’t have harsh tannins that need smoothing over time. Nor do they have much subtlety or delicacy of flavor that could be overwhelmed by greasy food.

Some of these wines are even packaged in a box like fast food or in a Tetrapak like apple juice. Think of it as a sympathetic approach: most boxed wine isn’t even labeled with a vintage date, it just says something like “best enjoyed young.” (Though it’s unclear to me whether that refers to the wine or to the drinker.)

Ten or fifteen years ago, “vino collapso” was often terrible. But recently, the quality has improved to the extent that even some premium brands are using the format.

And why not when there are advantages of price and convenience? Most wine sold in boxes is cheaper than wine of comparable quality in a bottle, and can be stored much longer after being opened: the bag inside the box provides a vacuum seal as the wine is poured out, preventing air from oxidizing what’s left.

A Tetrapak can be squeezed to achieve the same effect. Your wine is ready to pour whenever you get that midnight craving for grease. An extra splash, and you can even supersize it.
Pizza Vino

Wine experts often recommend zesty whites to cut through the fat and saltiness of the mozzarella that is frequently the main ingredient of this take-out classic. 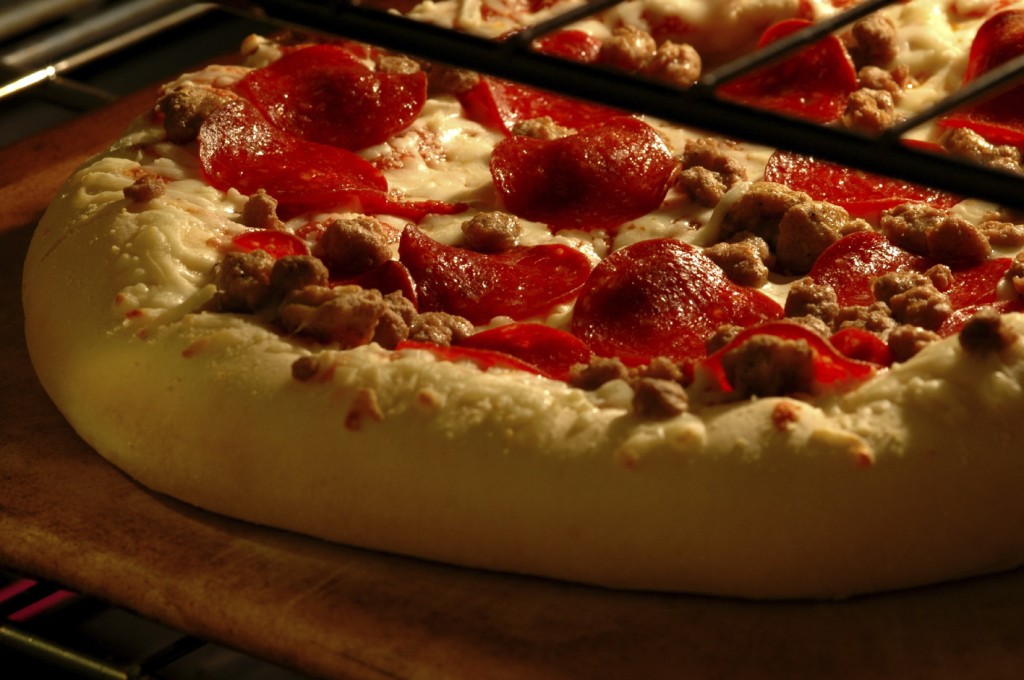 Reds and rosés with good acidity can handle pizza too; and they stand up to the tangy tomatoes, olives, and pepperoni. The classic regional pairings for pizza with tomato sauce are Italian reds such as chianti, barbera, or barolo.

Pizzas come in many varieties and so do the complementary wines. The Margherita pizza, for example, was named in honor of Queen Margherita, the wife of King Umberto I, in 1889, when the couple visited Naples and wanted to taste the local pie.

A chef patriotically selected toppings with the colors in the Italian flag: white mozzarella, fresh red tomatoes, and green basil leaves. As there’s no tomato sauce on this pizza, you can choose a wine such as pinot noir that has softer acidity than the Italian reds.
Burger Wines

For another popular fast-food choice, the hamburger, many people assume that a honkin’ big red would be the best choice. Not necessarily: try an off-dry riesling from Germany, Canada, California, or Australia, or even a Californian white zinfandel with your Big Mac, Whopper or Arby’s roast beef sandwich. 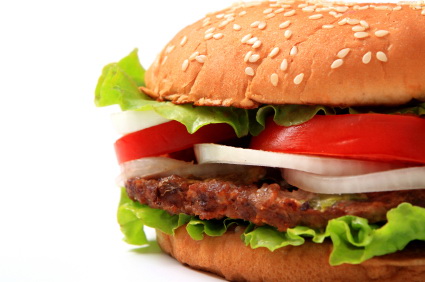 The secret sauce on the meat is actually quite sweet, and so is the relish topping. That calls for a wine with a little sweetness itself and enough acidity to cut through the fat in the meat and cheese.

(Not to mention the inevitable side order of fries, usually doused with ketchup that’s sweet, tangy, and salty. These wines also work with those flavors in Chinese dishes.)

If you prefer red wine with your burger, try a juicy, fruity, round red, such as a Californian zinfandel or an Australian shiraz.

The peppery and spicy notes in these wines are a bonus, complementing the flavors of the burger, the smoky bacon and the barbecue sauce. They also work with other grilled meats in Mexican fajitas, a steak sandwich, or a Salisbury steak TV dinner.
Bubbly and Fried

When you dig into deep-fried food such as fish and chips or fried chicken, you perceive the taste of fat as sweet, so you don’t need more sugar in your wine. 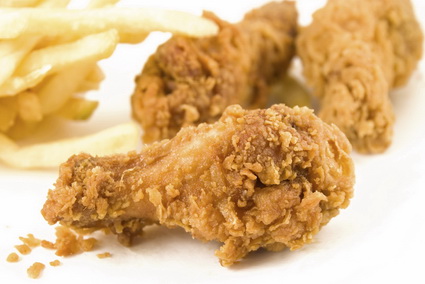 A dry, crisp white, such as Alsatian riesling, French pinot blanc or dry rosé, goes best. The goal is to cut through the fat and refresh your palate with every sip. The best match for fried food, however, is bubbly, whether it’s champagne or sparkling wine from another region.

It’s the perfect contrasting complement in taste and texture. Nothing goes with “Extra Crispy” style of Kentucky Fried Chicken like a swarm of bubbles.

One of the fundamental principles of classic food and wine matching is that the simpler the meal, the more complex the wine can be because it’s not competing with multiple flavors.

My favorite illustration of this occurs in the hit movie Sideways. Near the end, the diehard oenophile Miles (still dressed in a tuxedo from his friend’s wedding) smuggles his coveted 1961 Chateau Cheval Blanc into a fast-food joint and drinks it from a Styrofoam cup.

In fact, the classic bordeaux isn’t such a great match with onion rings; he should have tried a grand cru Chassagne Montrachet instead with its rich buttery flavors.

However, I cheered anyway because the gesture represented the beginning of his transformation: Miles was starting to loosen his rigid rules about wine and life.

And so should we.

Instead of believing that wine makes a meal more formal, why not just think of it as making it more fun? Pouring a glass of your favorite vino jazzes up an ordinary meal—the shabby-chic principle is like adding rhinestones to faded jeans.