By Priya & Alex, A Vine Romance

When you think of South African wines, several prominent names may come to mind, but there is more to this region than just a few well-known wineries. We learned this the easy way—by meeting one of the remarkable winemakers who is producing wines of exceptional quality. That winemaker is Jonathan Grieve and the winery is Avondale.

The invite we received to join Jonathan at a winemakers lunch had us a bit skeptical. What could we expect from a man who holds a duck in his arms in a promo shot? 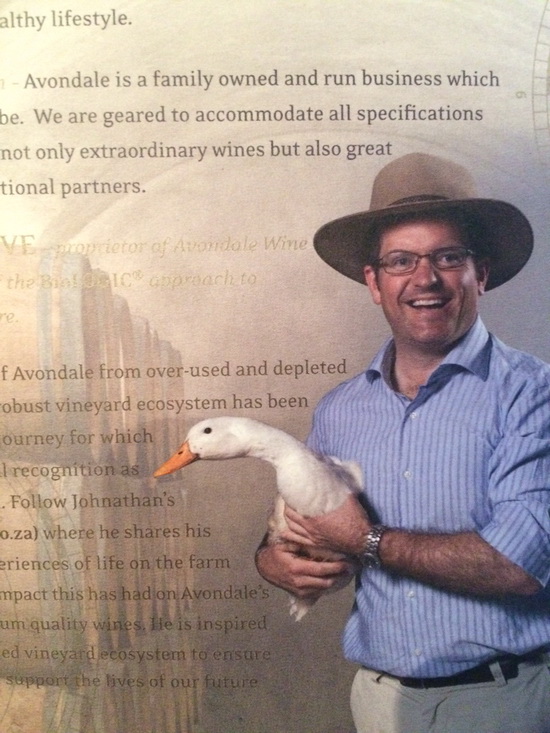 Well, we learned the old saying sure rings true—“Don’t judge a book by it’s cover”.  In the two hours we spent with Jonathan we learned more about biodynamics and organic winemaking than we could have imagined. Actually, he prefers to call his type of farming ‘biologic’, a combination of organics, biodynamics and modern science.  It was like school, but fun!

•    rather than using pesticides, even organic ones, they use animals to control pests. For example they use baby ducks to eat the snails that threaten the vines before they bud and wasps and natural bacterias to control other pests

•    they use ‘natural ferments’ i.e. indigeneous yeast found on the grapes rather than buying commercial yeasts

•    the area Avondale’s vines are in has some 8,000 indigenous species that are unique to that area

•    even the amphorae which house some of the wines for a time are made from clay on the property, further enhancing the ‘terroir’ affect in their wines

There was some discussion at the table whether ‘organic’ wines get a bad rap and whether Avondale wanted to be categorized as an organic winery or a South African one.  Jonathan said they position themselves alongside the best South African wines and everyone at the table agreed on that point. 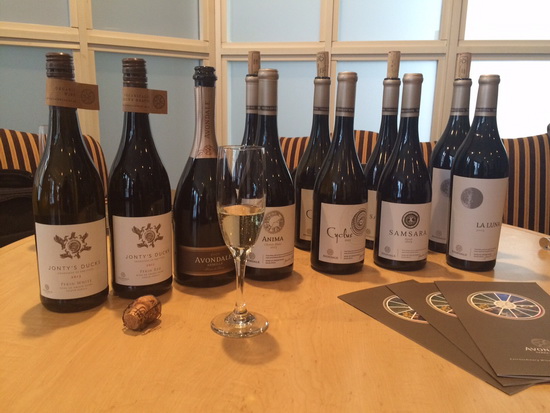 Their Jonty’s Ducks Pekin Red and Pekin White will be available at the LCBO in June at the unbelievable price of $14.95! We highly recommend you run to your local store before these wines are snapped up.

Alex says the Pekin White has a very floral nose with lots of citrus—grapefruit, lemon and tangerine—along with a touch of honey. It’s clean, dry and fresh and was perfectly paired with a salad of greens and orange slices.

The Pekin Red, he said, was spicy and juicy with hints of fig on the nose. Well balanced it’s a great, savoury wine with a liveliness Alex attributes to their biologic farming practices. It was great paired with the beef and even with the delicious wild mushroom gnocchi they very kindly provided as my vegan meal! 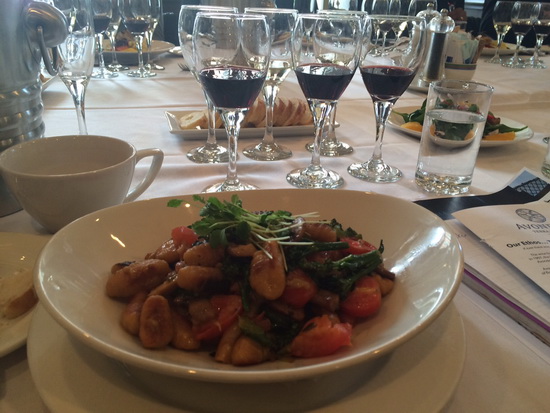 They had several other wines for us to sample including a sparkling white which was one of the best sparkling wines I’ve ever had (said as a person who is not a fan of champagne—I know, I know—I just find the bubbles overtake the actual taste of the wine).

It had the smell of freshly baked sourdough bread which was echoed in the mouth and which was accentuated rather than overpowered by the bubbles. I cannot wait until that comes to the LCBO.

All in all, a very informative and eye-opening afternoon. It was capped by a great chat we had with Jonathan about his style of viticulture (or winemaking as most of us know it), which he calls ‘farming with energies’ and ‘working with the rhythms of the constellations’. Sounds all hippy-dippy and witchy, but it does produce some outstanding wines.

Look out wine world, there’s a new region about to take the stage and it’s South Africa. And our new friend, Jonathan Grieve? He’s right at the helm and we were smart enough to have him sign a bottle for us! 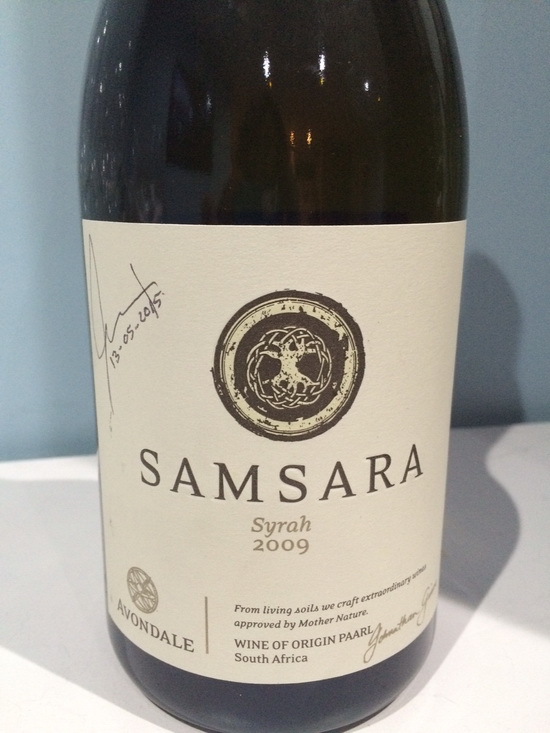