We often talk about buying wine because of the way it’s made, but we don’t often talk about who makes the wine in terms of race. Here with us today to highlight some of our country’s best wines that are owned or produced by Blacks, Indigenous or People of Colour (BIPOC) is Natalie MacLean who offers Canada’s most popular online wine classes.

Why does it matter who makes the wine, Natalie?

These days we seek out wines because of how they’re made, whether that’s sustainable farming, organic viticulture or ethical Fair Trade practices. We vote with our dollars. We do the same when we’re conscientious of who makes the wine, and we support them, recognizing the particular challenges they face in every industry, whether that’s getting small business loans or broadening their distribution with our purchases.

Tell us about the first winery you’re featuring. 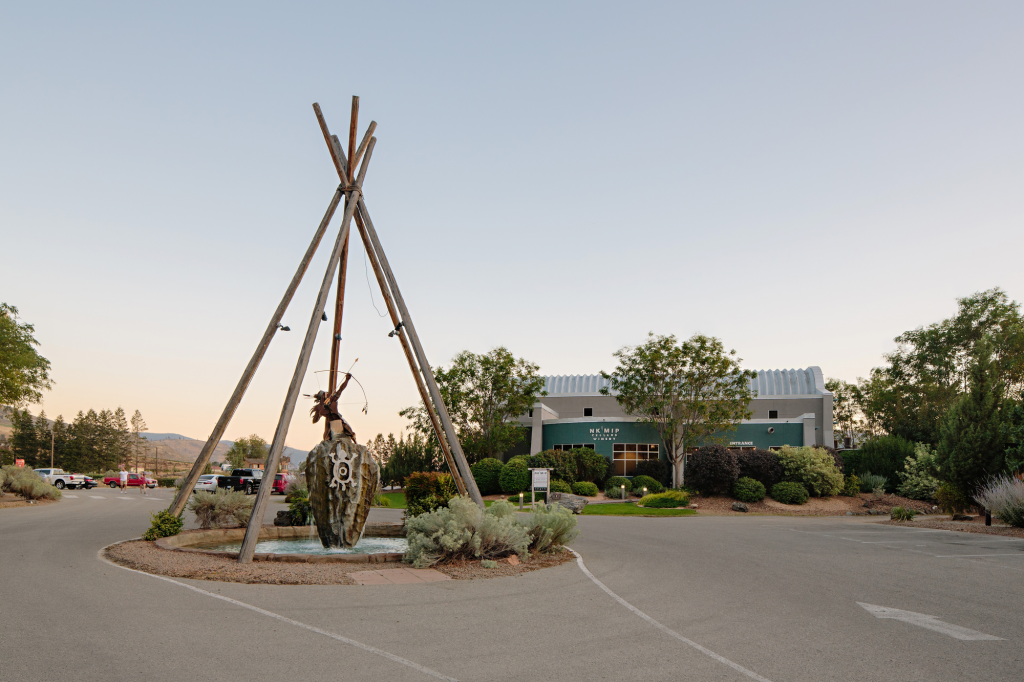 We’re starting with Nk’Mip Cellars, the first Indigenous-owned winery in North America. Nk’Mip means “Bottomland” because the vineyards are planted at the southern tip of the Sonoran Desert, the warmest, driest part of Canada … ideal for creating wines of concentrated flavour. 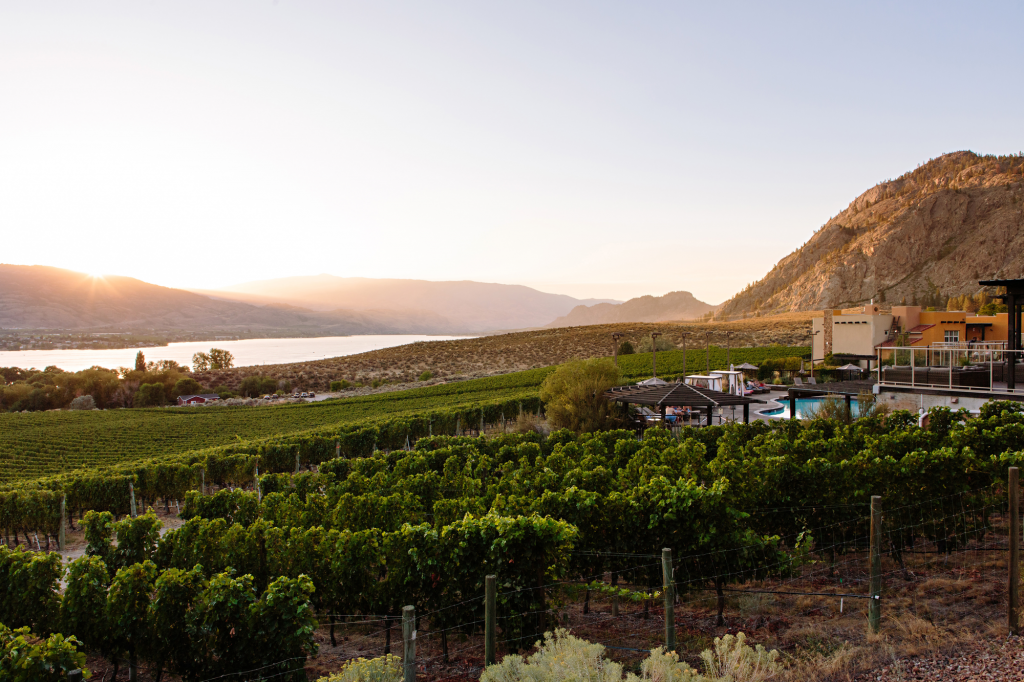 Winemaker and Osoyoos Indian Band member Justin Hall’s connection to and respect for the land where he was born is evident in the wine he produces. Justin first thought he wanted to be a mechanic, but after only a few days as a cellar hand at Nk’Mip, he discovered a passion for winemaking. After completing the viticulture program at Okanagan University College and a post-graduate diploma in eenology at New Zealand’s Lincoln University, he’s now the estate winemaker. 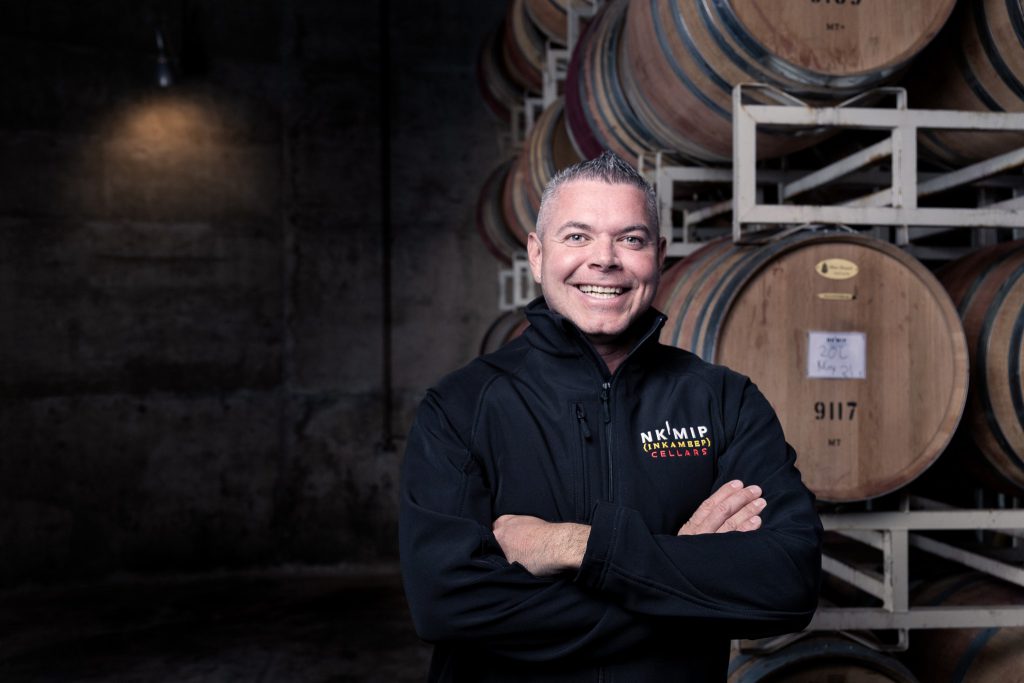 Justin created the robust, concentrated QWAM QWMT Cabernet Sauvignon. Qwam Qwmt (pronounced kw-em kw-empt) in the Okanagan language spoken by the Osoyoos Indian Band means “achieving excellence.” This wine is produced in very limited quantities, from 40-year-old vines on the estate, and is deemed worthy of this distinctive title. Aromas and flavours of cassis, spice and blackberry. It would pair beautifully with prime rib or a mature cheddar.

We’re moving on to another BC winery. Who are we talking about next? 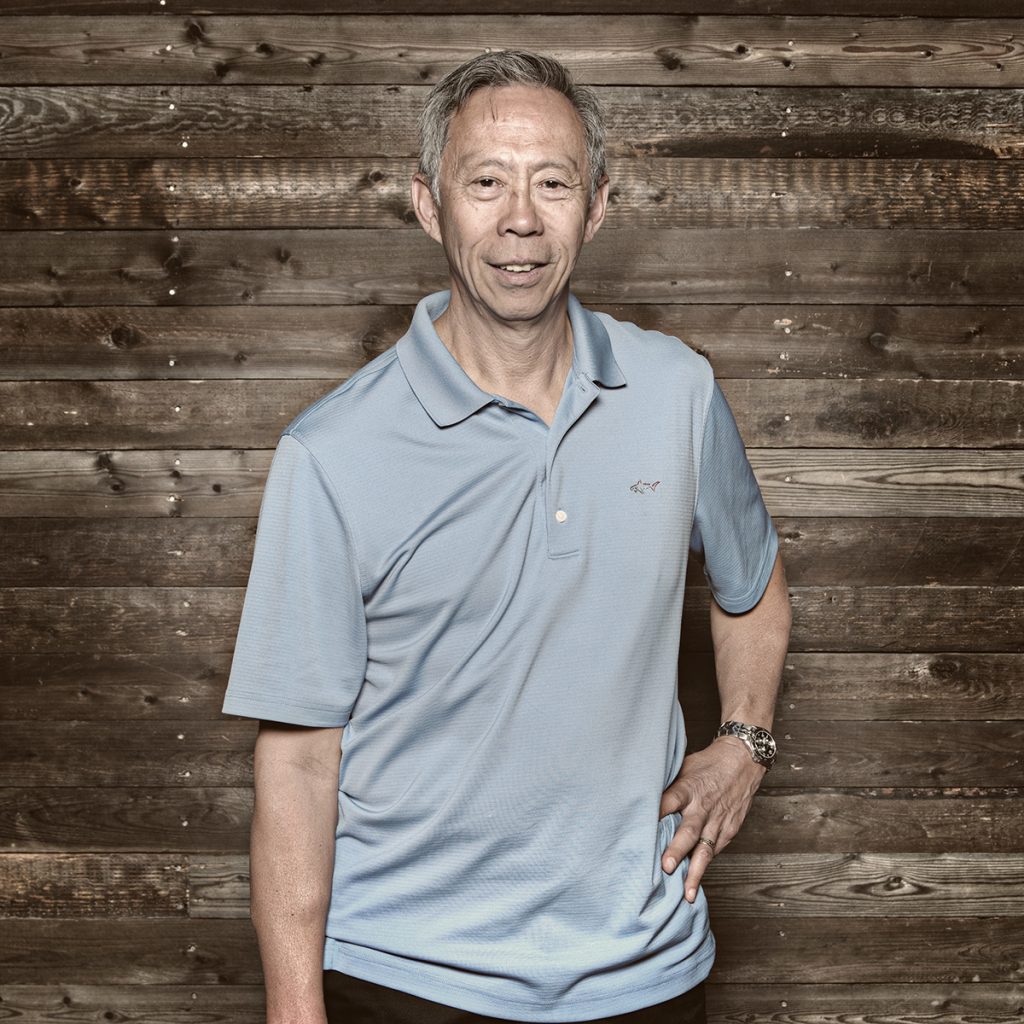 Howard Soon is the head winemaker at Vanessa Vineyard in B.C.’s Similkameen Valley, after spending 37 years at another terrific B.C. winery, Sandhill. Howard is the grandson of a shopkeeper who emigrated from southern China to B.C. in the 1880s. 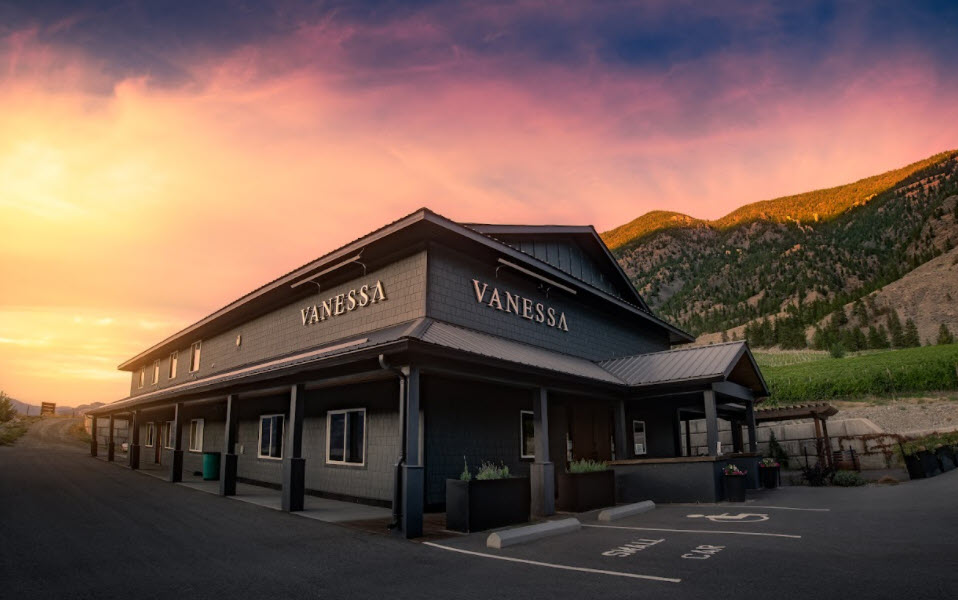 Howard was the first winemaker in the province to receive a Gold Medal at the Chardonnay du Monde in France and in 2019, and was named to the Order of Canada, presented by the Governor General, to honour people whose service shapes our society; whose innovations ignite our imaginations; and whose compassion unites our communities. 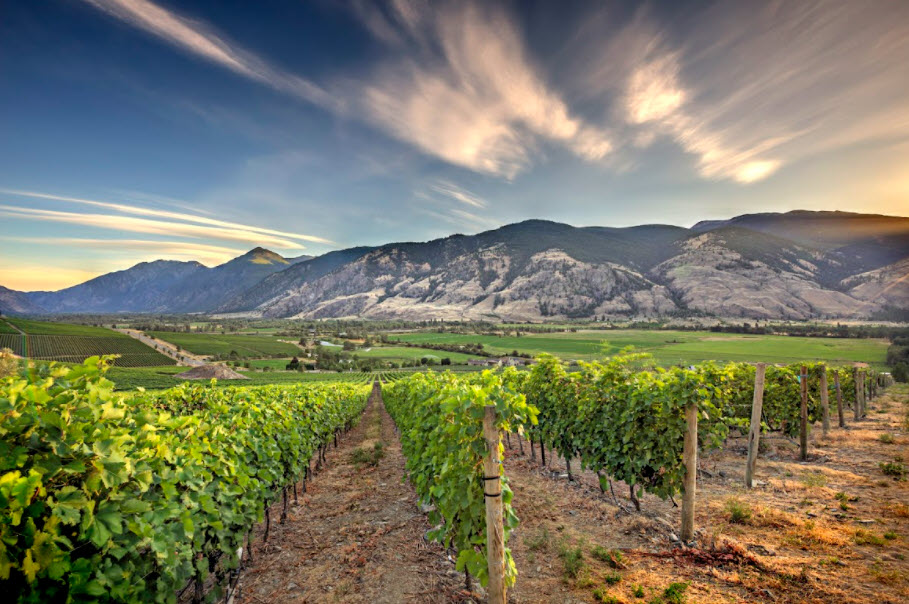 He has a special focus on single-vineyard wines, to showcase how special very particular vineyards are, such as those at Vanessa Vineyards.

What wine of Howard’s do we have here to taste?

The Vanessa Vineyards Syrah is made from the same clone they use in the Rhone Valley, France, and he also adds just 10% viognier, a white grape, to add a floral lift to the wine. It’s full-bodied, smooth and generous with aromas of ripe blackberry and plum. This would be perfect with a leg of lamb and rosemary.

Next we’re heading to a winery in Nova Scotia. Who are we talking about there? 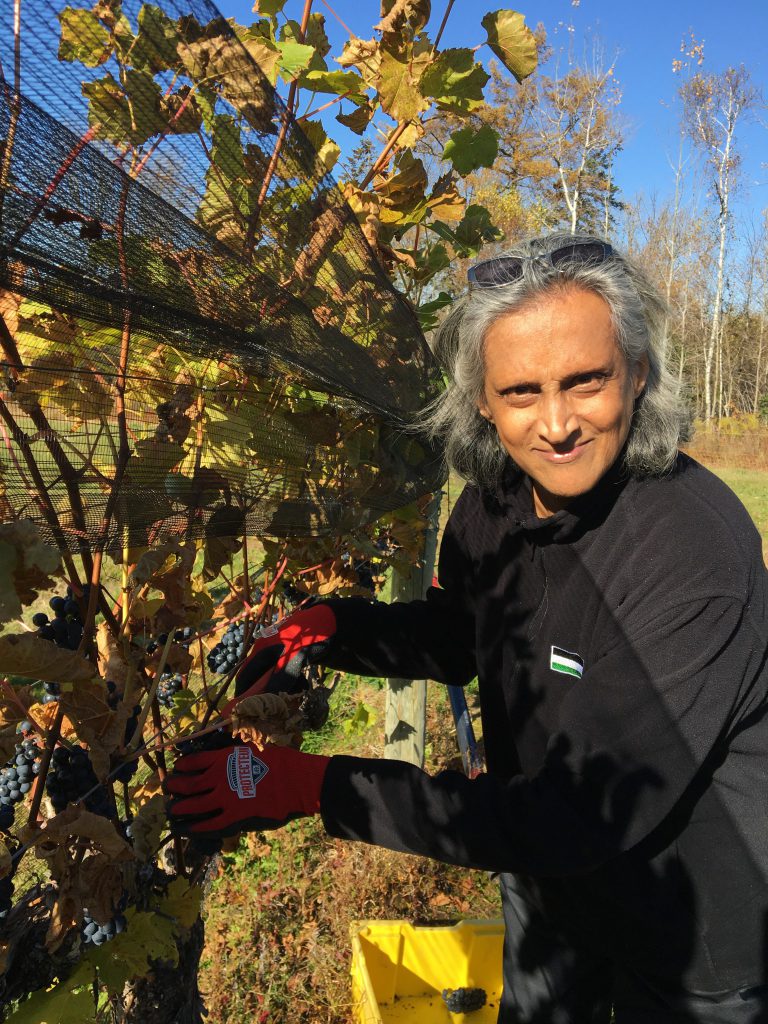 After completing a degree in psychology and history at Bombay University, India, Avila Coutinho immigrated to Nova Scotia when she was just 17 years old. After a 25-year career in finance, she and her husband, Louis, purchased the Avondale Sky Winery and Restaurant in 2018, which they now run as a family business with their two sons, Karl and Sean, along with their wives. 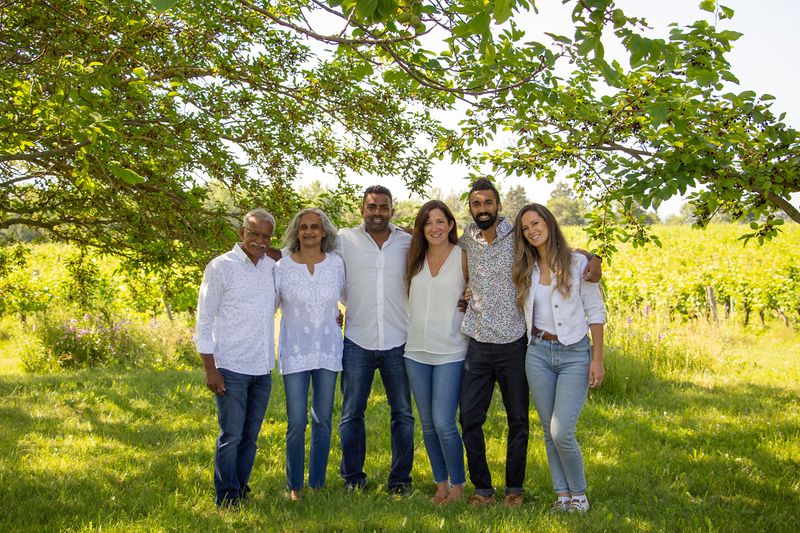 The Avondale Sky winery once walked on water. It was formerly a church built in 1837, but when Avila and her family heard it was slated for destruction, they decided to buy the building and convert it into a winery. 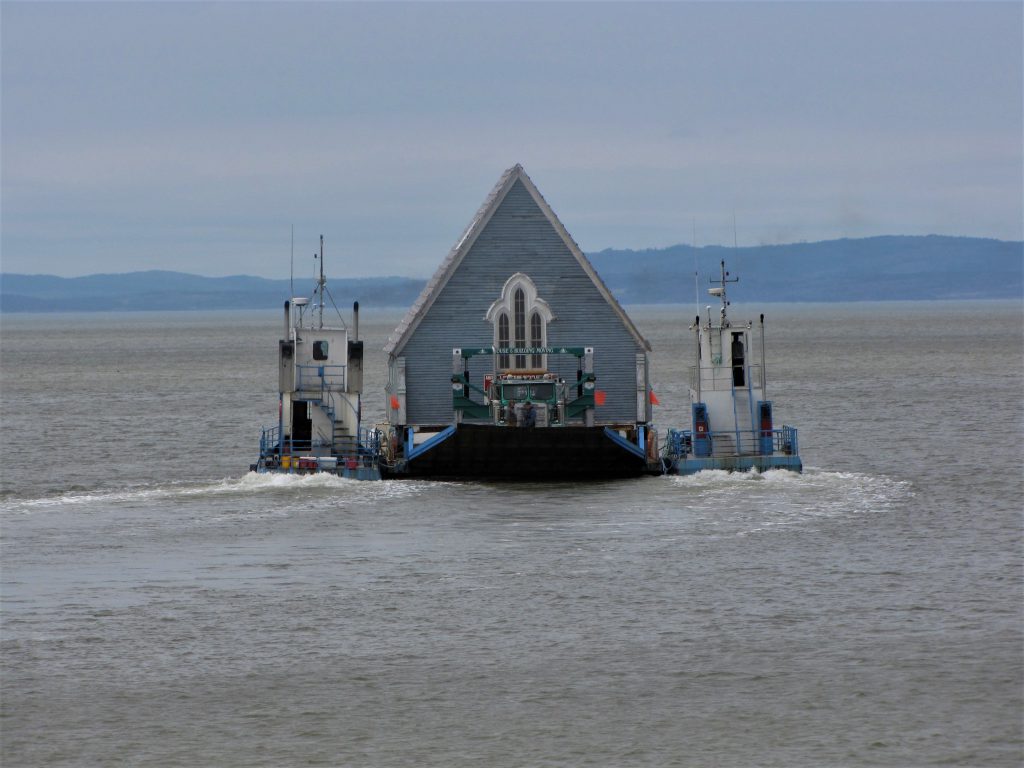 The catch was that the church was 42-kilometres away from the land where the vines were planted. So they had the building lifted off its original location and moved by road to the shorefront of the Bay of Fundy, where it was loaded onto a ferry and floated with the world’s highest tides to its new location. Miraculously, every pane of stained glass survived. 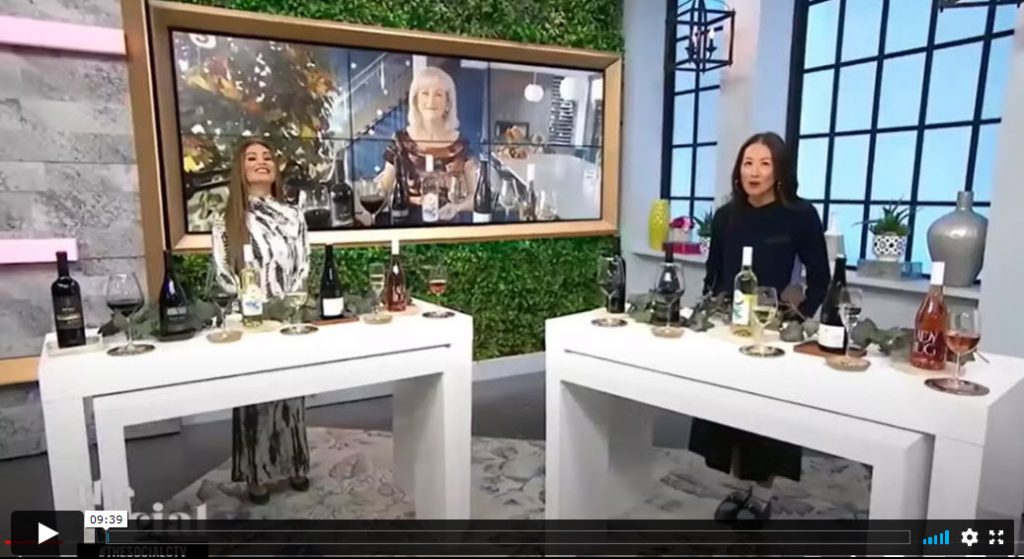 What creation of Avila’s are we sampling today?

Their Tidal Bay wine style is unique to Nova Scotia. It’s a blend of highly aromatic, floral grapes that low in alcohol (just 11%) with crisp, racy acidity that makes it a beautiful match with Atlantic lobster in melting butter. Avondale Sky offers a unique experience of Dining On The Ocean Floor, a multi-course seafood feast, prepared by a local chef, literally on the ocean floor while the tide is out.

Let’s move on to Ontario. Tell us about the story behind this winemaker. 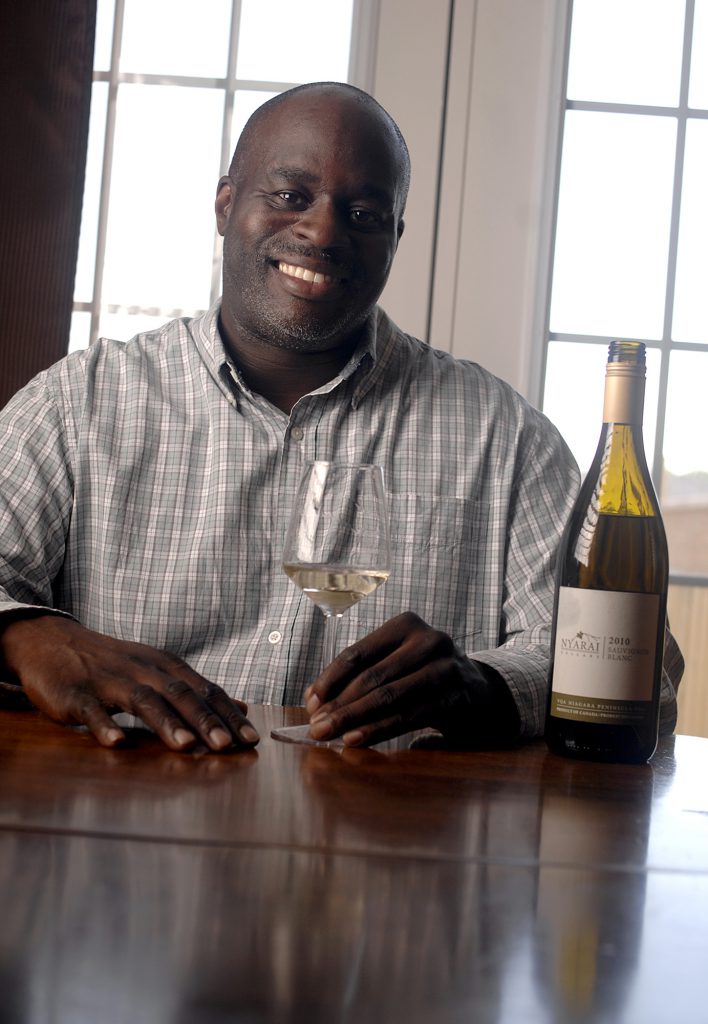 Steve Byfield, the son of Jamaican immigrants, is the owner and winemaker for Nyarai Cellars. 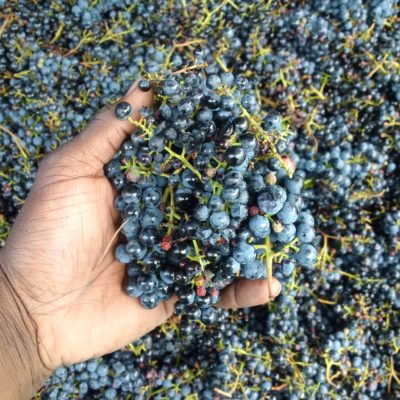 Born and raised in Kitchener, Ontario, Steve started off pursuing a career as a music educator, studying at York University and playing in a jazz band in Southern Ontario. After his first year in university, he started working part-time in the industry, eventually moving to Southbrook Winery for five years. 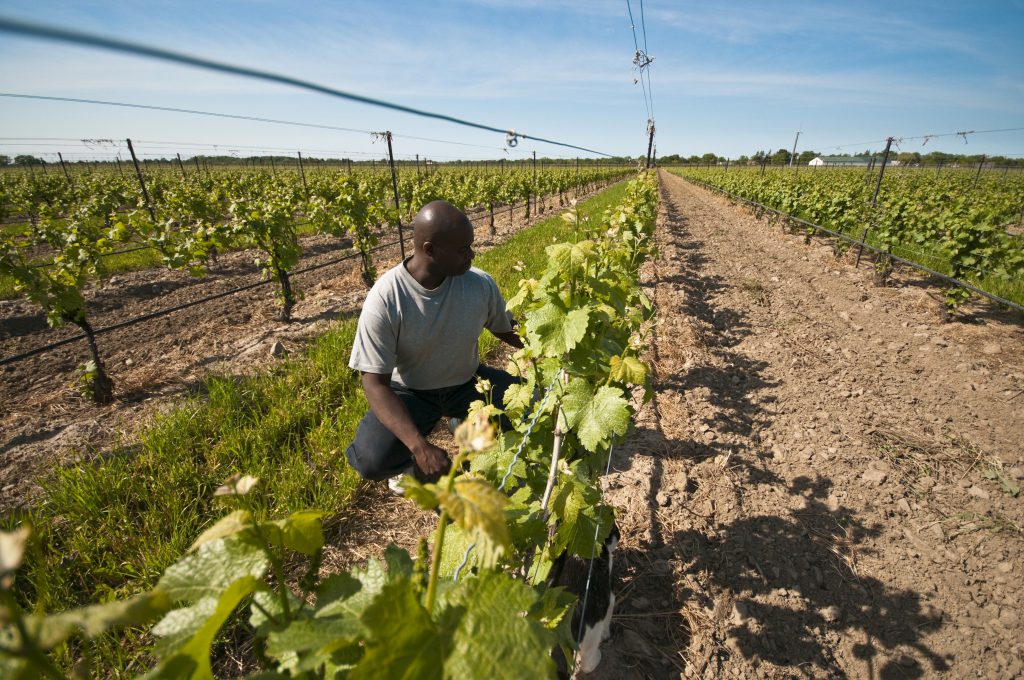 In 2008, he created Nyarai Cellars. This is a “Virtual” winery, in that they don’t own their own vineyards or winery building. Instead, they contract with top-notch Niagara grape growers and winemaking facilities to create their wines, which have won numerous awards. 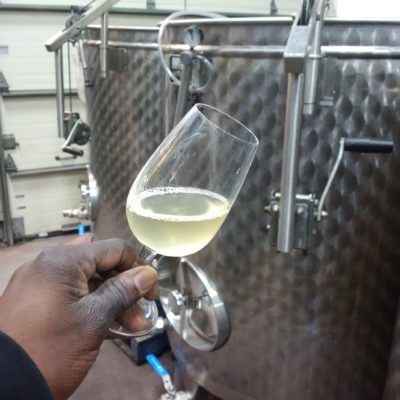 What are we tasting?

Their Folklore sparkling wine, inspired by the spumante wines of Italy, is a blend of highly aromatic grapes, such as Riesling, Vidal Blanc, Muscat Ottonel, Sauvignon Blanc, Chardonnay and Gewurztraminer. It’s bursting with aromas of soft orange zest, peach and floral notes.

Steve says this was crafted in gratitude to his ancestors’ struggle, sacrifices and hardships. He invites others to raise a glass of this bubbly with friends and family to create their own memories and folklore.

You have another winemaker from Ontario to tell us about. 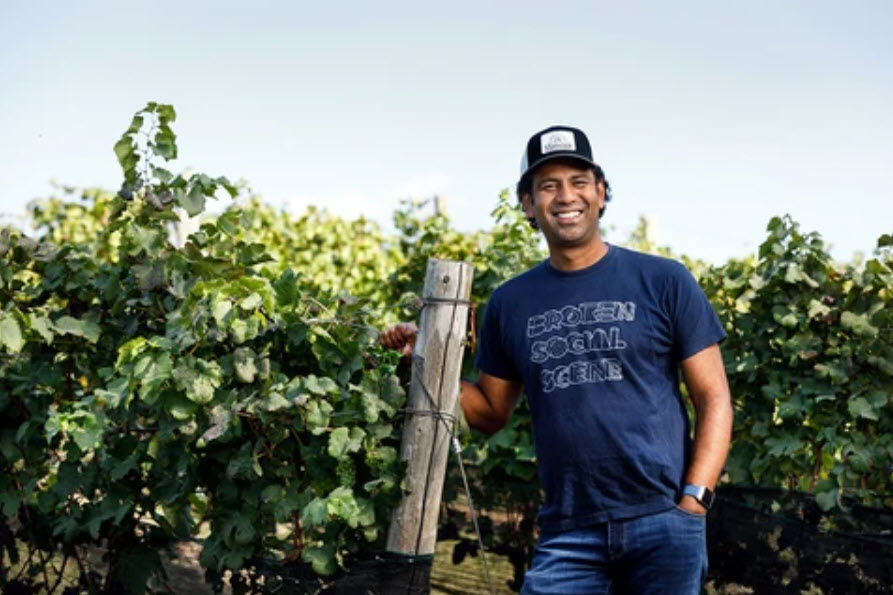 Shiraz Mottiar was born and raised in Fergus, Ontario. His parents emigrated from South Africa to Canada. 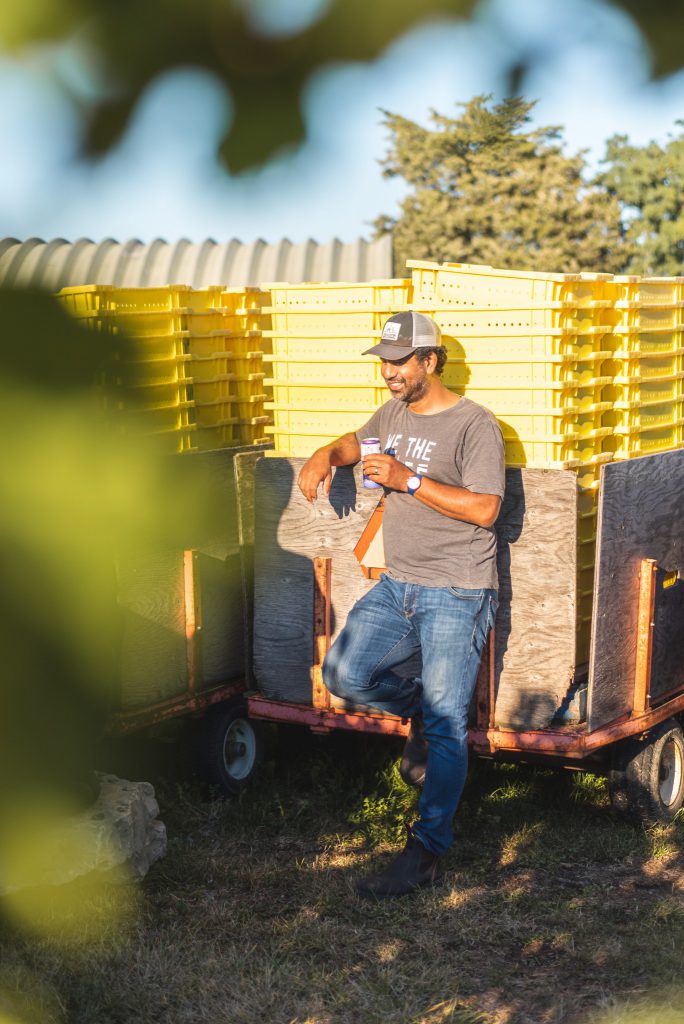 He was a member of the first graduating class of Brock University’s Honours Oenology and Viticulture degree in 2000. That year he joined Malivoire as a cellarhand, eventually rising to the position of winemaker. 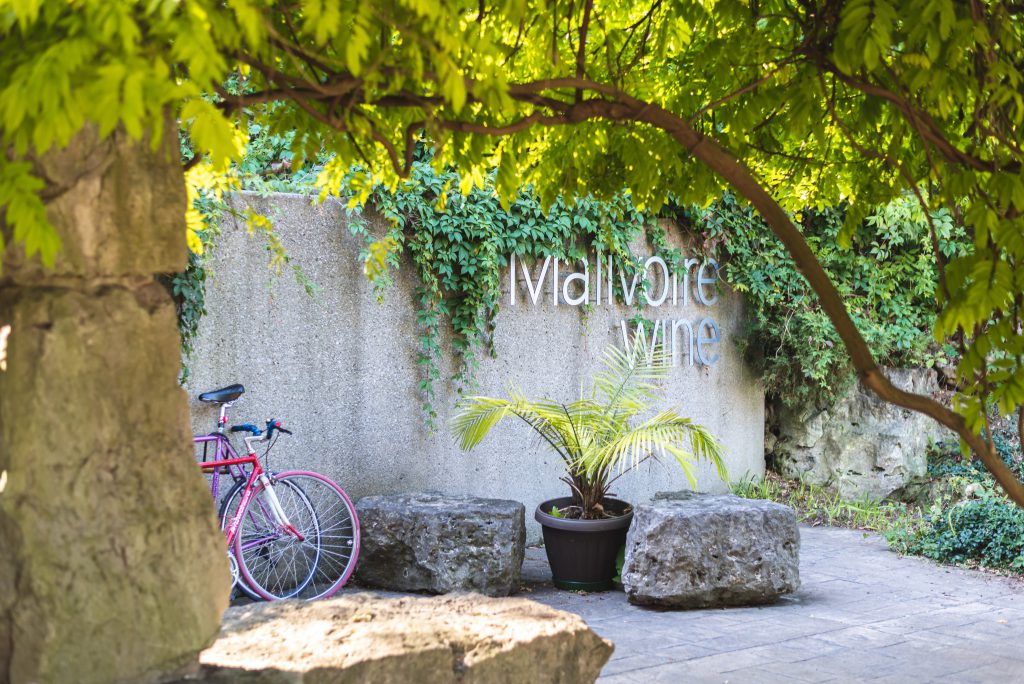 At the end of his day, Shiraz returns home to his own Beamsville Bench vineyard, where he farms three hectares of Pinot Noir, Chardonnay and Melon de Bourgogne. In 2017, he was named “Winemaker of the Year” by the Ontario Wine Awards, in recognition of his consistent excellence and contributions to the province’s wine industry. 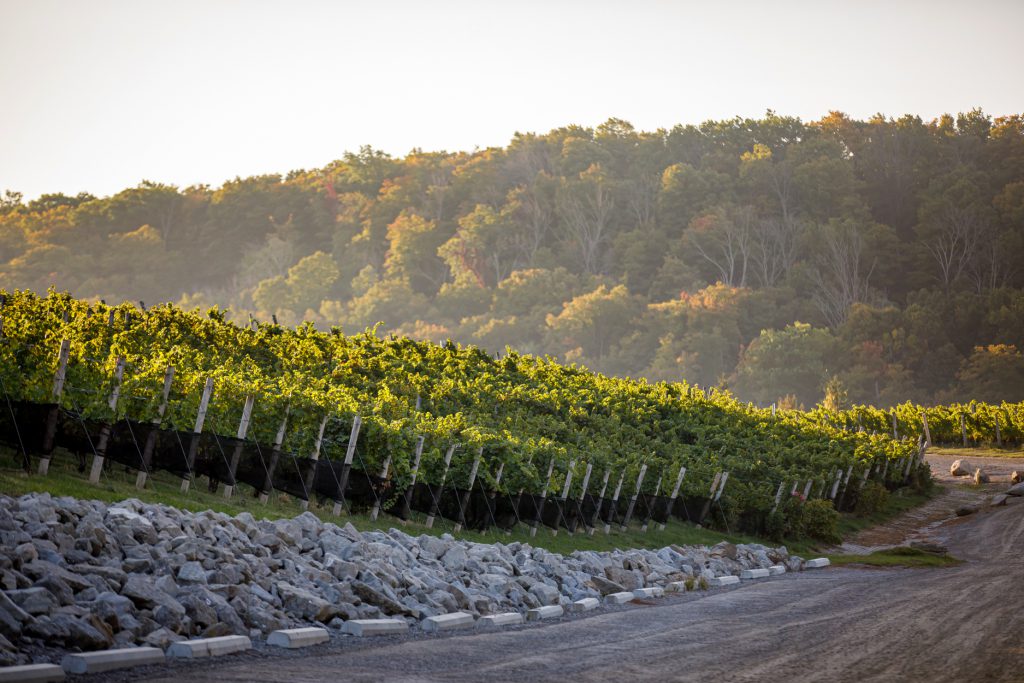 Malivoire produces organic wines in a gravity-flow winery, where the wine gently flows with minimal intervention from its highest point rather than being pumped up aggressively into tanks. This produces wines of great subtlety.

What is the final wine we’re sampling today?

The cheerful little red beetle crawling across the label represents the sustainable farming philosophy of Shiraz and owner Martin Malivore. To combat destructive insects that have a taste for grape leaves, they release thousands of ladybugs into the vineyards. The ladybugs are selective about what they eat, whereas insecticides destroy every bug in its path, and leave a vineyard more vulnerable to pest attacks the next year.