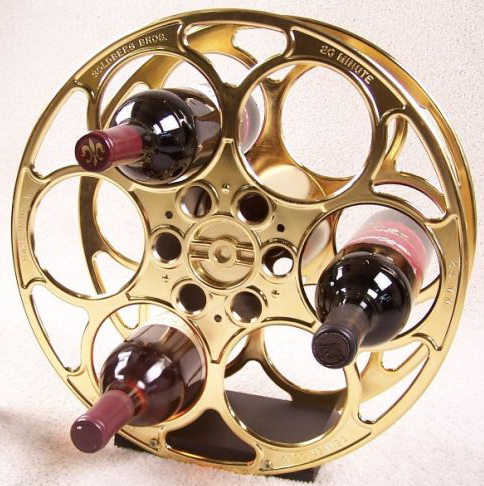 In films such as the Godfather series, wine and food are expressive of Italian culture, and its fierce loyalty—wine is part of family gatherings, and presented as something simple, without pretense.

But also represents the darker side: the brooding nature of the family members, and the blood ties that bind.

Looks alone have made red wine the preferred drink of horror movies, often an omen of evil. The Dracula movies associate wine with blood. “Aren’t you drinking?” inquires the guest, as Count Dracula pours him a glass of claret.

In Interview With The Vampire (1994), Tom Cruise wrings out the blood of a rat into a crystal wine glass for Brad Pitt, who’s feeling squeamish about human blood.

Pitt has since recovered and started his own wine label with Angelina Jolie: they recently got married at their French winery estate.

They join the ranks of other celebrity winemakers, including Avatar director James Cameron’s BC winery.

Silence of the Lambs is in the same queasy vein. After it hit the theatres in 1991, many wine lovers (and most census takers) eased up on the chianti after watching Hannibal Lecter pair the Tuscan wine with fava beans and human liver. (Oenophiles sniffed that, in the novel, the wine was a more classic Amarone della Valpolicella.)

A decade later in the sequel Hannibal, Lecter’s connoisseurship rises to a new level: he selects a 1996 Château Phélan-Ségur.

And while his decision to pair such a robust red with pan-fried human frontal lobes cannot be faulted, that he also chooses to serve it with caviar is simply barbaric.

But the darkest moments for wine in movies are when it’s the drink of choice for alcoholics, such as Days of Wine and Roses (1962), which follows the decent of a middle-class couple into poverty once they start drinking.

More often, though, hard liquor or beer is the liquid path to annihilation as in Reuben, Reuben (1983) in which Tom Conti makes a sodden lecture tour (his wife calls it a “lecher tour”).

While on a train he hands a half-finished bottle to Kelly McGillis to hold while he goes to the bathroom. However, he takes only a few steps down the aisle, when he stumbles back, snatches the bottle from her, marks the alcohol level on the label and then hands it back to her. The scene is poignant with Conti’s deep humiliation and helplessness.

Wine is sometimes a pivotal prop that moves the story along—what renowned director Alfred Hitchcock called a “Macguffin.” An object that in itself has no meaning, such a gun hanging on the wall, foreshadows the ominous events to unfold.

In Notorious (1946), the evil Nazi Claude Rains has hidden a bottle of 1934 Pommard filled with uranium ore in his cellar.

Upstairs, the guests (including Hitchcock himself, in one of his cameo appearances), are slowly drinking down the supplies of champagne—soon Rains will have to go down to fetch more and possibly discover Ingrid Bergman and Carey Grant snooping around down there.

Grant accidentally pushes the bottle off its rack, it breaks and he exclaims, “Vintage sand!” Can they clean it up before they’re discovered? Rent the movie, buy the wine.

Wine is central in the Secret of Santa Vittoria (1969), which features the inhabitants of an Italian village who risk hiding their best wine—one million bottles—from the approaching German forces.

Anthony Quinn, the town’s mayor, proclaims: “Without our wine, we are nothing. Our wine, the blood of our labour, is sacred!” Even when the Nazis torture two men, the villagers will not betray where their wine is hidden, so central is it to their identity.

The action is down in the cellar again in Mercury Rising (1994), when, after a tussle, undercover cop Bruce Willis drinks from one of the bad guy’s (Alec Baldwin) rare Pommerols as though he’s chugging beer from the bottle.

“I asked you not to handle the wine please,” Baldwin says testily.

Willis retorts, “It’s good to see you have your priorities in order—you’re not worried about murdering a nine-year-old boy, but you’re worried about this f**king wine.”

He smashes the bottle against the stone wall—a scene more scarring for wine lovers than had he shot Baldwin.

Read more about wine and movies …