Lots of laughs on CTV’s The Social this week!

The hosts chose the theme of a Royal Halloween, so Lainey dressed as Prince George, Cyn was Daenerys from Game of Thrones, Mel was Megan Markle and Marci was Queen Ramonda from the Black Panther movie.

I channeled my inner (royal) wine witch and brought my broom shtick to the show. What a hoot we had together!

Here are the tips, tricks and wines we discussed …

Something a bit scary happens on Halloween: we’re surrounded by lots of treats, but will they pair well with our wine?

Here, with some monster matches that won’t frighten your palate, is Natalie MacLean, who offers Canada’s most popular online wine classes at nataliemaclean.com/class. 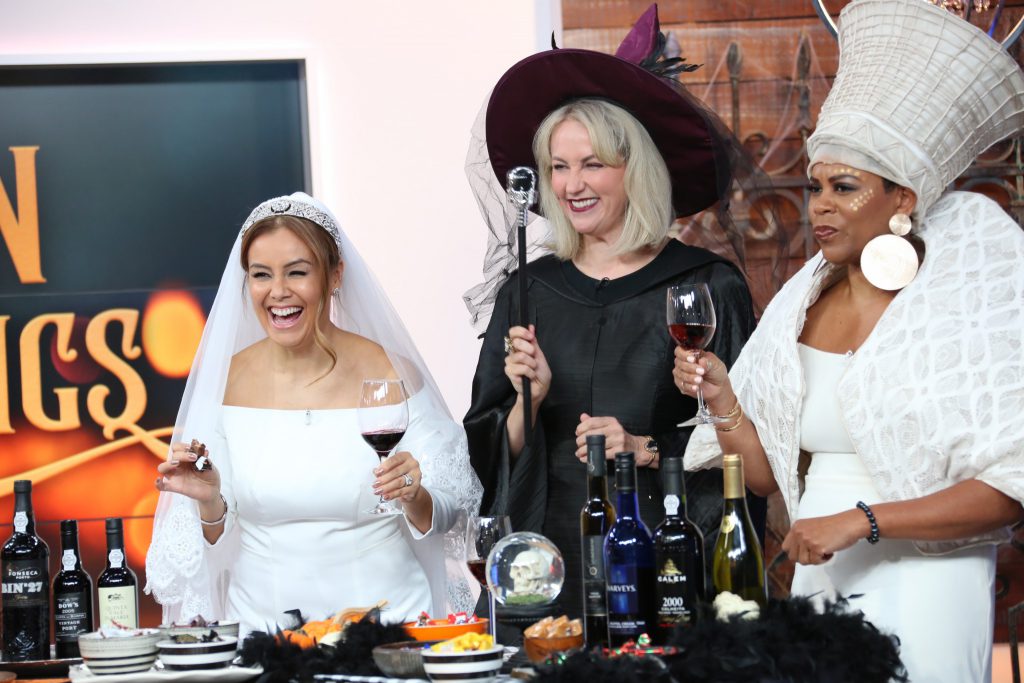 Natalie, when we’re pairing wines with treats like junk food or dessert, what are the basic guidelines we should follow?

– wine should be sweeter than the dessert

– look for core flavour matches too, between the wine and treat, whether it’s toffee or lemon

– have fun and experiment

Ok Natalie, I’m more of a salty than sweet kinda girl. I love things like chips and pretzels; so what would go well with those Halloween treats?

– treats like chips, pretzels and Doritos, that are not sweet, but are salty and bready, need wine that’s crisp, refreshing and it doesn’t have to be sweet.

– sparkling wine is perfect: bubbles and acidity cleanse the palate of the fat and salt.

I’m all for sipping on some bubbles while I hand out candy tonight. What have you brought me to try?

I have several sparkling wines here from Italy, France and Washington … why don’t you try this Italian sparkling rose?

Now take a bite of a chip, then go back to the wine. How has the wine changed?

Do you find its acidity has softened and it now tastes fruitier?

We’ll obviously be snacking on Halloween candy for the next little while but once that’s all gone, what desserts would pair well with sparkling wine?

Sparkling wine is one of the most food-friendly wines on the planet. It pairs well with food that gives other wines a headache, such as vegetables, quiche and salmon.

It also pairs beautifully with roast chicken and turkey, game birds and creamy cheeses. It’s natural acidity and bubbly cut through the fat in any dish and refresh your palate for the next bite.

I’m all about delicious dark chocolate. I don’t understand people who go for crappy chocolate over… 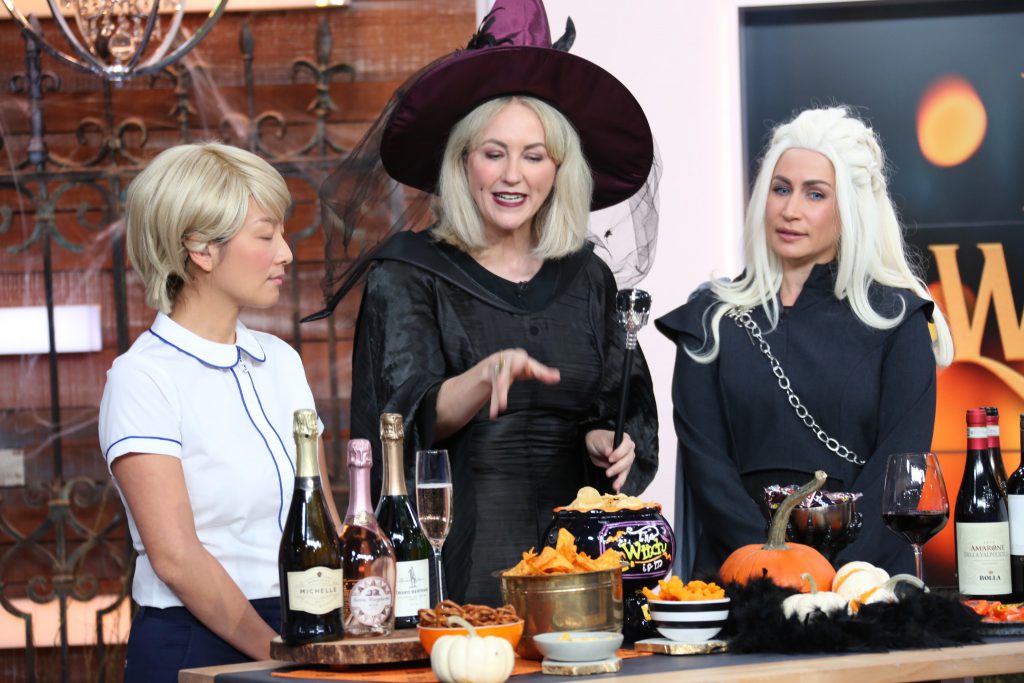 – dark chocolate; that’s not sweet or moderately sweet. Tootsie Rolls with a full-bodied dry red wine, such as an Italian Amarone

– wine must be high in alcohol like 14% or more as it helps to melt the chocolate and matches the weight and flavour of chocolate.

You know I love a full-bodied red wine so I’m definitely into this pairing. What have you brought me to try?

We have some Halloween-themes wines:

– Francis Ford Coppola Shiraz – he is the director of the movie Dracula.

– Casillero del Diablo translates to “cave of the devil” and it pairs with chocolate because it’s got that fleshy dark fruit.

I’d like you to try this full-bodied Italian Amarone from Bolla… its decadent dark spices and black cherry aromas are a great match for dark chocolate, when you still want to drink a dry red with your treats.

So try the wine first, then the chocolate, now go back to the wine; what happened? The tannins in the chocolate smooth out the wine to make it more luscious.

What desserts would pair well with these wines?

Anything with just a touch of sweetness, such as chocolate dipped biscotti or dark berries, and even a dish like Mexican mole.

Natalie, it’s our turn next so come on over! Marquesa is so sweet, she’s really great about sharing so I will most certainly be having some of her candy tonight. My ‘go to’ is the little chocolate bars. What should I sip while I snack on those?

· The wine’s voluptuous body and texture encases these little treats and makes them melt in your mouth.

· Ports are fortified wines from Portugal where grape spirit or brandy is added to wine mid way through fermentation, to add both sweetness and alcohol, which is usually about 20 per cent). So a little goes a long way; you only need a few ounces per serving.

· An open bottle will keep for a couple of weeks, so you can enjoy this after-dinner drink in the chilly days ahead.

Normally I’d be pairing my candy with Bailey’s on the rocks, but I’ll give this a go! What have you brought for me to try?

Vintage ports are made from grapes from a specific year, then aged in oak barrels or stainless steel for a maximum of 2 and half years before being bottled. They have dark berry and spice flavours. They’re often the most expensive of all port because they need to age in the bottle for 10-30 years before they’re ready to drink. So the one we have here is a baby ;).

Then we have a late bottled vintage port, which is like a vintage port, except that it’s bottled 5-6 years after the vintage, doesn’t require bottle aging so it’s ready to drink now and is a fraction of the price of vintage port.

Finally, we have the Fonseca Bin 27 Port, a ruby port: the youngest, freshest and least expensive of port styles, which offers more ruby red fruit flavours, like ripe strawberries and raspberries. It has a brilliant colour in the glass that’s very Halloween-like.

Have a sip of the Fonseca, then the Mars bar then back to the port to see what happens.

Port is generally served after a meal, so it’s known as a dessert wine. What desserts do the specific ports you’ve brought here, pair well with?

These ports would pair beautifully with Black Forest Cake, chocolate cheesecake and a deep and delicious fudge brownie.

Natalie, I love a sweet caramel or toffee flavour, and nothing says Halloween to me, more than those little caramel square candies. Who’s with me on that?

The caramel and toffee flavours in this tawny port, pairs well with Coffee Crisp bars, Crispy Crunch or toffee; the type of in-between candy that’s not maybe as sweet as a chocolate bar.

As mentioned earlier, we typically think of port as a dessert wine but there are different types of port, is that right?

Yes indeed! There is a white port that’s dry and often served before dinner with salted almonds and cheese.

Tawny ports are aged much longer in barrels, from 10-30 years, and that’s what gives them their gorgeous tawny colour, and the caramel flavour. They’re ready to drink immediately.

Hungarian Tokaj and Canadian icewine, with their apricot and peach flavours, also complement the coffee “nuances” in Coffee Crisp, as well as the toasted rice “accents” in Crispy Crunch.

You’ve also brought sherry. Why does that work well with these snacks?

Like port, sherry is a dessert wine, that’s fortified with grape spirit, to give it extra sweetness and alcohol, except that it’s after fermentation is complete, rather than half way through like port.

This Spanish wine has a toasted almond, nutty flavour that is divine with toffee treats.

Please try it, then the bar, and back to the wine.

While you’re trying that Marci, I think that sherry is especially suited to Halloween, as it was central in the plot of the Edgar Allen Poe’s mystery story “The Cask of Amontillado”.

The villain lures a man who has insulted him down to his cellar with the promise to taste a magnificent Amontillado, a type of sherry. However, he chains his tipsy victim to a wall and then walls him up with bricks and mortar to entrap him there alive.