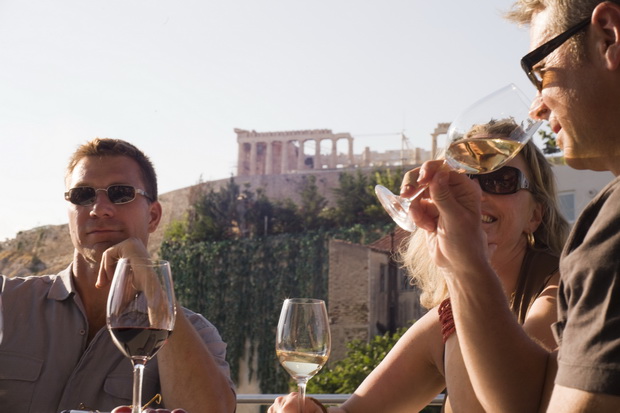 The ancient Greeks invented money. Bring back the old days when wine was free.

We don’t know who the individual was who first conceived of money, but we suspect it may have been a prescient winemaker who understood he could become rich and happy at the same time.

It figures then, that if you go to some of the finest (and priciest) restaurants in the country, you’ll find wines made from the Assyrtiko (ahs-SEER-tee-koh) grape on their wine list. (British wine writer, Jancis Robinson, named Assyrtiko as the wine she would have if she could only have one.)

Assyrtiko can be found in many parts of Greece but the island of Santorini is most associated with this crisp, white wine.

If you go to Santorini looking for vineyards, you’ll be surprised to find that they don’t look like the vineyards you’re used to.

The island’s high winds don’t allow for traditional rows of vines, so they grow low to the ground in circular baskets where the vines protect the grapes from the elements.

Assyrtiko is also unusual because it can take on the character of white wines from Northern Europe and that may suggest the origin of money because you’re getting what seems like wine from two places at once.

You can learn more about Assyrtiko and the other 350 indigenous Greek varietals by joining our online community. Your first lesson in modern Greek wine history is only learning about the four flagship grapes: Assyrtiko, Moschofilero (both whites) and Agiorgitiko and Xinomavro (both reds).

You get extra points if you can pronounce them (hint: the ‘g’ sounds like a ‘y’).

You can learn more about them and Greece by joining our online community.

Just click here, signup and you’ll receive our monthly newsletter AND have an opportunity to win $100 toward dinner at your favourite restaurant with Greek wine.  Best of all, it’s all free! 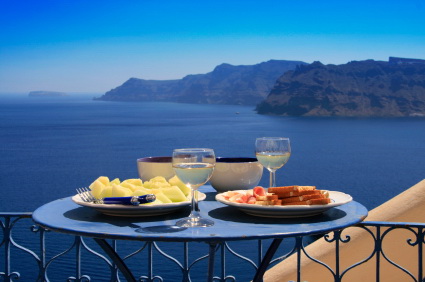 Of course, money is one of the foundations of democracy, without which there would be no elections.  Without elections, there would be no candidates.  And without candidates – like – maybe we should stop there and just raise a toast to those smart guys that thought up the concept 4,000 years ago.

Their discussions must have been helped by the great wines they produced in Greece then, and are even better now.

Our wines may not help you decide who to vote for, but they’ll certainly make it a lot more enjoyable.

This contest is sponsored by the Wines of Greece.