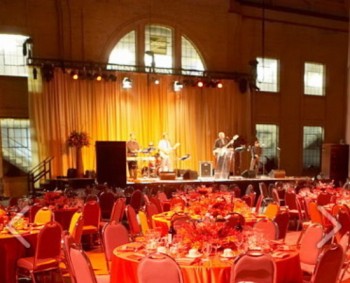 The Grand Cru Culinary Wine Festival is Canada’s largest wine and culinary fundraiser for medical research, raising more than $11.4 million since it started in 2005.

In the video below, chef Massimo Capra, who writes a column for the Globe & Mail and has appeared on the Food Network, is one of the celebrity chefs who will be cooking a special dinner this year. He reveals the details of this special meal in the video. You can also watch our second wine video chat here. 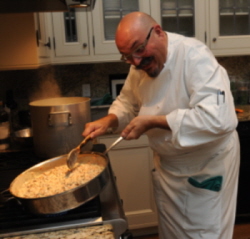 Chef Massimo Capra has been involved with Grand Cru since it began in 2005, and this year will be participating in the exclusive Wine & Dine Experience dinners. He’ll be cooking in the Metrick home, and is paired with Achaval-Ferrer (Argentina), Jolviet (France) and Dr. Michael Fehlings, Medical Director, Krembil Neuroscience Centre. 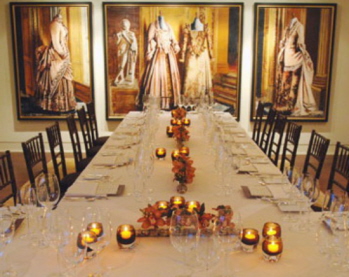 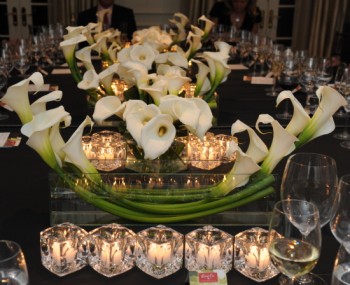 Proceeds from this year’s Festival will benefit the Peter Munk Cardiac Centre and the McEwen Centre for Regenerative Medicine where funds will be used collaboratively for research in heart, arthritis, vision and diabetes. 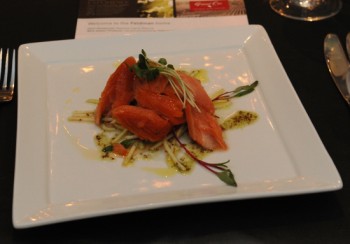 For further information about Grand Cru, including a full list of participating hosts, chefs and wine estates, UHN scientists and Live Auction items, please visit www.grandcru.ca. You can also follow the Toronto General & Western Hospital Foundation on Twitter at @tgwhf or on Facebook at www.facebook.com/tgwhf. 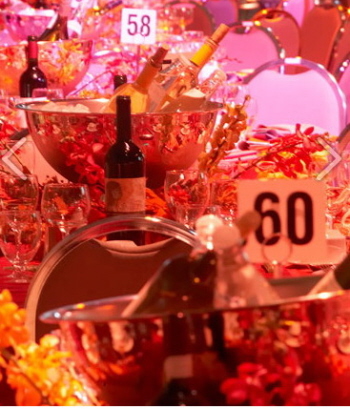 Massimo Capra was born in Cremona, Italy and developed an interest in food through helping out in his mother’s kitchen and his father’s garden. After attending culinary school and serving his time in the army, Massimo moved to Canada, following a job offering from a distant cousin.

After nearly a decade at Prego, Massimo moved to Mistura where he became co-owner/executive chef and opened a supper club directly above it, named Sopra. Massimo can be seen greeting his guests and taking his place in the kitchen of Mistura.

At Mistura he feeds “A” list celebrities, business tycoons who only ask for him. With his busy schedule, he also finds the time to travel the world in search of fine food, interesting places and people who can cook. He is still a student of world gastronomy and partners with chefs who have prepared meals for royalty, at elite Michelin star restaurants or just people who love to cook for the fun of it.

“It’s all about exploring food at its basic level, where it is harvested and creating amazing dishes with it. These dishes, ingredients and techniques I bring back to my restaurant. I want to give those who come to my restaurant and taste my food an amazing experience.”

Massimo Capra has been on The Food Network many times with successful shows like Restaurant Make-Over. He has a regular spot on the nationally broadcast CityTV’s Cityline, is a national column writer and author of two best selling cookbooks. He is now the host of his own destination cooking show called Gourmet Escapes.

He is also bringing his passion for great gourmet food at affordable prices to Canada’s busiest airport, Pearson International (Toronto), with the opening of “Boccone Trattoria” in Terminal 1 Domestic departures; and “Boccone Pronto” in Terminal 1 US departures.

He is making his presence and his love of food known all around the world. Massimo Capra had been dubbed “Canada’s Jamie Oliver” by The Glasgow Evening News.

Natalie: The Grand Cru Culinary Wine Festival is Canada’s largest food and wine fundraiser for Canadian Medical Research. Since 2005 it’s raised more than $11.4 million for scientific research and programs. Chef Massimo Capra who owns one of Toronto’s most popular restaurants and has appeared on The Food Network has been involved with the festival since it began. This year, he’ll be cooking for one of the private food and wine dining experiences that’s part of the fundraiser and he joins me today to talk about that. Welcome, Massimo.

Massimo: Well thank you very much for having me here.

Natalie: Good. So before we jump right into the festival, let’s talk a little about you first, Massimo.

Natalie: Where did your passion for food and wine first begin?

Massimo: Actually, not too far from the building I’m standing in. It’s on 150 Bloor St, there was a restaurant called Prego Della Piazza and the relationship I had with the owner of the restaurant kind of stimulated my appetite for better food and better quality and the wines and everything else that goes with it. I mean obviously I started cooking very early in life. I did my culinary training in Italy in cooking school when I was 15 year’s old. I started cooking school and I went to work in 2000, I have many years of training in Europe. And then I moved over to this side of the ocean. Total fluke, I mean, don’t ask me why, but I happen to enjoy living in Toronto.

Natalie: And what is it about food and wine pairing, especially?  I know you’re a chef, a celebrated chef. What is it about the combination that makes it special for you?

Massimo: Well let’s say the one helps the other to taste fantastic, right? So when you have a great recipe you need something really good to wash it down with. But it’s not just the washing down, something magical happens when you have the proper flavours in your palate of food and you accompany the right wine with it. The whole experience becomes whole and complete. I know too many people that may be totally out there. But it doesn’t really take that much training.  The palate can figure out that this thing really tastes so much better and the wine has so much more flavour. It’s so beautiful to have them together.

Natalie: Absolutely and let’s talk about that, some beautiful flavours coming together with the Grand Cru Culinary Festival in Toronto.

Natalie: You’re cooking for one of those special dinners.

Natalie: Tell us about the kind of meal that is going to be involved this year.

Natalie: And who is Pascal?

Massimo: Pascal is a winemaker from France, the Loire Valley in particular. The food that I have to create is really, well, a little more intense in terms of flavour so a little bit more cream . Since we are in November, I use mushrooms and truffles and a touch of cream and maybe some more butter than I would normally use. I created a menu that is the Italian version of something that they would eat in France and in Argentina, because there is an Argentinian wine as well. There’s a beautiful Malbec.  But the beauty is that I had to play with wines from the Loire Valley and the North of France or middle of France and play with Malbec which is really very different in a sense. But I brought everything together with a beautiful menu that pleased the people that are actually throwing the party, which in this year will be in a furniture store and a carpet store, very famous carpet store.

Natalie: Really? They’re going to host the dinner inside the carpet store?

Massimo: Yes, we’re going to host a dinner right in a carpet store. We have beautiful tables; it’s going to be great.

Natalie: Will there be a red carpet?

Massimo: Yes, yes. I was wondering if we were going to sit on the carpet and just eat. No, it’s not going to happen that way but it’s absolutely wonderful and it’s always a pleasure to do wine dinners like that because you get to experiment. You get to actually test out new things, right?

Natalie: So how many people will be at the dinner? I mean do they bid to win the opportunity to have this dinner? How does that work?

Massimo: I believe that the dinner is sold in couples or singles and we accept only 24 to 30 so I believe I have about 26 people at this particular dinner.

Natalie: So they will be able to talk with the winemaker and you and the medical researchers, …the brilliant geniuses?

Massimo: Exactly, at the dinner there are always medical researchers, there are doctors, all the people that will actually receive the money and the funds for the research and the hospitals and everything else. The chefs are there, the winemakers are there, they will talk about the wine, they’ll explain the combination.  They’ll explain why they were chosen that way. It’s normally a very great event.  It’s almost like being in somebody’s house, a casual dinner.

Natalie: And there’s a series of dinners?

Natalie: Are there different chefs…

Massimo: And it’s all for research.

Natalie: Yes. In your involvement since 2005, what’s been the most memorable moment for you at one of these dinners? What happened?

Massimo:  Well, several. There’s too many to mention. Every single dinner is different and it’s in a different house, a different venue. We are always rotating, There are always chefs that are different and a lot of them are the same but we are rotating between houses so one year I might be in one house and another year, another. Every host brings their own style.

Natalie: What did you do last year?

Massimo: Last year, unfortunately, I didn’t participate because I was away. But the year before, I was in a beautiful home with a really great host who actually kept the party going after 2 o’clock in the morning. And then somebody else hired me, asked me if I wanted to bring food for an after party.

Natalie: An after party?

Massimo: So at 2 o’clock I loaded up my van with food and I went to a place far away in Woodbridge. It’s about a half hour drive from here and we partied until 7 o’clock in the morning.

Natalie: Wow, you are dedicated to this cause.

Massimo: Yes, oh yes. You don’t want to handle people in your house in that condition, I’ll tell you that much. Everyone that was coming was really partied out. But it was good, it was good.

Massimo: It’s all in the name of a good cause, right?  This is the beauty.

Natalie: Yes. Well, you know what? We’re going to keep talking about the auction and the particular wine you have with you to taste when we come back. But thank you so much for giving us a taste of the culinary festival this year.