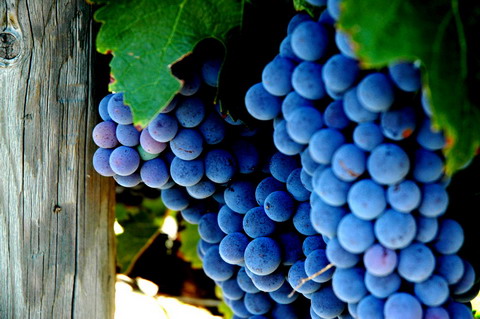 Garnacha, as it’s known in Spain, is more commonly as Grenache in the rest of the world, and is one of the most widely planted wine grape varieties on the planet.

You’ll find my most recent Garnacha reviews and ratings here.

1. Garnacha’s origins go back to Spain in the Aragon region, known as Garnacha.

It was well established on both sides of the Pyrenees when France annexed the Roussillon region.  From there, it made its way to the southern Rhone region and was introduced to Australia in the 18th century.

2. In the 19th century,  Garnacha found its way to California, where it was praised for its high yields and its ability to withstand heat and drought.

3. In Australia today, it is widely blended with Syrah and Mourvedre to make the well-known GSM wine.

When Garnacha is blended with other red grapes, it adds body and sweetness to a wine.

Garnacha vines have a strong wood canopy and are known for their upright growth.

The Garnacha vine has good wind tolerance, but it buds early and ripens late, so it needs a long, hot dry season.

This could explain why Garnacha does so well in southern France, Australia and Spain.  It can be challenging for a winemaker, because Garnacha oxidizes easily and loses color.

The grape’s thin skin and pale color makes it perfect for full-bodied fruity rose wines that add a different side to its character.

4. Garnacha has other synonyms around the world, including Grenache, Aleante, Aragones, Grenache Noir,

Bois Jaune and Tinto are just a few of the over 40 synonyms.

Garnacha is known for aromas of raspberry, cherry and blackberry and an underlying earthy note.

5. It is generally soft and spicy on the palate with flavors of cherry and fig and tends to be high in alcohol content but low on acidity, color and tannins.

Garnacha pairs well with turkey and soft cheeses like Jarlsberg and Gouda.  It also pairs very well with roasted pork and lamb and when it’s blended with Syrah and Mourvedre it can also tackle the hefty meats.

When you join our wine community as a Paid Member, you’ll get access to all of my Garnacha wine reviews, which are updated weekly.