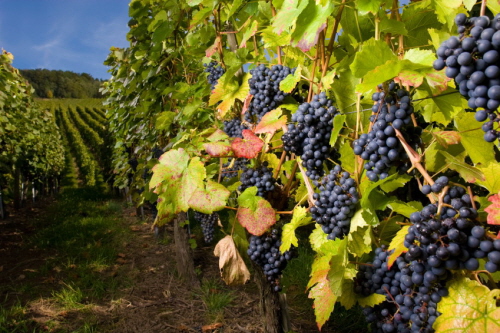 The most popular Bonarda-based wine in the North American retail market is made in Argentina where it is the second-most planted grape variety, just behind Malbec.

1. Bonarda is a late-ripening grape variety that requires a large shift in temperature from day to night, so that the wine reaches high enough sugar levels without overheating and creating a stewed wine.

2. The Mendoza Valley in Argentina is ideal for creating this climate for the grape and is where the majority of the planti

3. The Mendoza climate also allows Bonarda to develop black cherry and blackberry aromas, with notes of anise and leather.

4. Bonarda is a big, dark, full-bodied wine that still manages to keep its alco

hol levels low making it an ideal pairing for white meat like pork and chicken.

5. The grape is thought to originate from the Loire region Jura in France where it has the name of Douce Noir or Corbeau or Charbonneau among several other names.  Researched by Lesley Quinn

Bonarda from Piedmont, Italy, is known as Bonarda di Chieri or Bonarda del Monferrato, but is mostly used to add more aroma to a Barbera wine.

Then there is Bonarda dell’Oltrepò Pavese from the Lombardy region in Italy that uses the grape’s synonym Croatina and Uva Rara.

The Bonarda grape is also grown in California where it is goes by the name of Charbono.

When you join our wine community as a Paid Member, you’ll get access to all of my Bonarda wine reviews, which are updated weekly.