Looking for some wine advice for Thanksgiving? Or any part of the holiday season?

Check out Unquenchable: A Tipsy Quest for the World’s Best Bargain Wines now in paperback. In it, sommelier and award-winning wine writer Natalie MacLean shares her expertise to reveal wines that aren’t commonly considered but that many will find stunning.

Basically, these wines are affordable because demand doesn’t drive up their prices. Argentinean Malbec, for example, doesn’t have the cachet or brand awareness of Cabernet Sauvignon or Merlot, so producers have to compete aggressively on price. Its flavor falls somewhere between the two noble red grapes.

Conversely, California Chardonnay and Italian Pinot Grigio are two white wines with status. Think of their prices now, as opposed to when you started drinking them.

So if you want to find a fine wine with value, take a chance on lesser-known grapes and consider less-fashionable wine regions.

This brings us to the wines of Sicily and South Africa. If you like Italian reds but don’t want to pay the price for bottles from Tuscany, give Sicily’s Planeta winery a chance. Try their Nero d’Avola or Insolia, MacLean suggests. And don’t hesitate to try Nero d’Avola from a different producer, either.

South Africa has all the makings of a great wine region and it’s made big strides since the end of apartheid. “Start out with familiar grapes, Sauvignon Blanc, Shiraz or Cabernet Sauvignon.” As you discover the producers you like the best, branch out and try their white Chenin Blanc (also called Steen) and red Pinotage wines.

When a region is stereotyped for one kind of wine, look for what else it does well. MacLean offers the Niagara Region of Ontario as an example. Everyone thinks of icewine as the Canadian niche, but she says to give their Pinot Noir and Riesling a sip. Look for producers Malivoire, Tawse, Flat Rock, Coyote’s Run, Le Clos Jordanne, Featherstone, Lailey Vineyard and Inniskillin. The Pinot costs $25 and up, but that is just a fraction of what a French one from Burgundy would cost.

MacLean, like so many wine experts, also suggests giving German Riesling a try as it is a wine that is versatile food-wise and light and vibrant. Look for Dr. Loosen and St. Urbans-Hof, she said.

The book includes her conversations with winemakers, which captures a passion that you can almost taste in their wines. 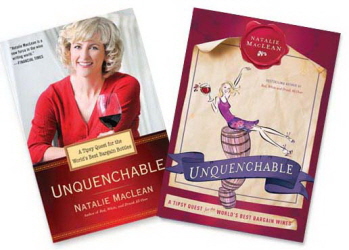