In late October, I attended a winemaker dinner with Joel Peterson, winemaker and “Godfather of Zinfandel” from Ravenswood Vineyards in Sonoma, California. The event was held at the Flying Pig in Vancouver’s Yaletown, and as we tucked into plates of comfort food, Peterson stood up and began telling stories about the wines he brought to pair. The result was a humorous blend of history lesson and standup comedy that made me homesick for Sonoma.

My favorite story was about Teldeschi Vineyards since my friend, Bill Wertzberger, makes his wine at the F. Teldeschi winery which I have visited many times. Dan Teldeschi is so frugal that he will pour yesterday’s wine from a laboratory vial in order to avoid opening a new bottle. This kind of quirkiness seems to run in the Teldeschi family, as Peterson elaborated in this story of how he was able to buy grapes from Frank Teldeschi.

“This is the vineyard where I got one of my first winemaking lessons,” he started.

“The vines were planted in 1900 and are still farmed by the same family that planted them. Dry farmed, cross cultivated, effectively organically farmed except they won’t designate it organic because they are Italians. They don’t want rules at all. Don’t tell me what to do even if it’s what I do anyway.

“In 1982, I need grapes, so I go to my mentor’s farmer, Mike Teldeschi. Mike and Joe Swan don’t get along, so he no longer sells grapes to Joe Swan. I figure maybe he’ll sell grapes to me. I walk into his house and we talk about grapes, and he says, ‘oh yeah, you work for Joe Swan. I’m not selling you grapes because I hate him. And besides that, you have long hair.’

“I say, great, Mike. Is there anyone else who has grapes like yours?

“He says, ‘Oh yeah, go see my brother. My brother loves guys like you. I’m sure he’ll sell you grapes. You know the grapes. They’re right across the dirt road from my vineyard. You should go see him, I’m sure he’s home.’

“Little did I know these guys had a fight 20 years earlier. They hadn’t spoken in 20 years. And so I headed down to Frank Teldeschi’s house.

“I had long hair and a beard, wore a lot of tie dye. Frank saw me and said, ‘what do you want?’

“I said, I heard you had great grapes.

“I said, Your brother.

“As I turned to leave, Frank said, ‘what’s that in your hand?’

“I said, It’s a bottle of wine, Frank, a bottle of zin I made. I thought maybe you’d like to taste it if you were going to sell me grapes.

“He said, ‘It’s lunchtime, you can stay for lunch.’

“We sat outside under the big tree, his two sons show up from the vineyard, his wife Catarina, who’s Italian, brings out fruit, homemade pasta, a fresh chicken, the pig that Franks shot in the vineyard. We finished off my bottle within 38 microseconds.

“Frank says, ‘That’s good, too much oak for me. Maybe you’d like to taste my wine.’

“He comes back from the barn and he’s swinging a gallon jug that says Petry on the side. I’m thinking, uh oh. Trouble. This is Dego Red, full of aldahyde, full of diea, and I’m going to die! He fills my tumbler and I stick it to my nose to find out what the quality of my death will be – and it’s pretty darn good.

“Well, a half a gallon later, old Italian secrets are not so secret.

“He says, ‘It’s not complex. It’s a little embarrassing: first of all you have to get the grapes ripe. The other guy who gets grapes here, he doesn’t get them ripe enough. The other thing you have to do is you have to put petite sirah and carignan in your zin ‘till you’re making it here in Dry Creek. Otherwise, it doesn’t have good balance. I bring my grapes down to my yard when they’re ripe and I put them in my fermenter after I put ’em through my crusher.’

“This crusher is really a grape grinder. It’s a box with slanted sides and a handle on the side of it. And his fermenters: he says, ‘I used to use wood – this is the embarrassing part – but I use those big grey garbage cans.’

“He says, ‘sometimes I take stems out, sometimes I don’t. It depends on how lazy I feel.’

“And the wine was really good. We drink that entire bottle with his two sons, and by this time Catarina is drinking with us. Frank decides I like his wine well enough and he pulls out a bottle of his favorite muscatel. This is fortified muscat he made in 1955 and it’s really good.

“Lets just say by the time I get up from the table at 4:30 I’m feeling no pain at all. I head off to my car thinking the back seat’s a really good place to take a nap.
“Frank says, ‘what’d ya come for?’
“I came to buy grapes, Frank, but you’re not selling. But, great lunch, thank you.
“He said, ‘I kinda like you. You seem like a nice young man. How many grapes do you think you want?’
“I said, four tons.
“And he said, ‘four tons?’
“I think, wow, that’s not that many grapes to get excited about.
“He says, ‘The other guy that buys grapes here will never miss four tons. I’ll give you four tons. But I don’t want you hanging around here. If my brother sees you it’ll give him too much satisfaction. If the other guys sees you it’ll just piss him off. And besides that, you’re one of those young winemakers who’ll want to tell me how to grow grapes. I been doing this for 50 years and I don’t need your help. You just come when I call.’

“He said, ‘I can do that,’ and we shook hands and when I left I said to myself, I’ll never hear from that S.O.B. again.

“Frank would never let me vineyard designate it because he didn’t want to offend the other guy who got grapes from this vineyard. But when Frank died, John and Catarina came to me and said, ‘We’re ready to let you vineyard designate the wine. Please do it.’

“So this is the result. It doesn’t taste that much different than what Frank did. It has a little more oak, it’s from Dry Creek bench land, Tuscan red hills sort of soils, has a little petite sirah and carignan, and it tastes pretty darn good. Lots of black cherry, lots of vanilla, lots of really cool stuff. So, enjoy!”

We did enjoy the 2009 Teldeschi Vineyard Zinfandel, which, despite its density and intensity, proved to be the most elegant of the flight. Its finish seemed never ending and it paired amazingly with the braised organic beef short rib.

The wine and food were as enjoyable as the story, but not nearly as funny.

Footnote: the guy who Frank said would be pissed off if he sold Peterson his grapes? He was from Gallo, another winery known for familial infighting. Typical of Sonoma. 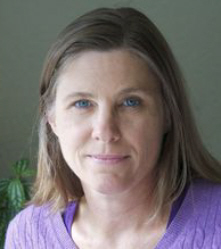 Mari Kane is a wine writer and blogger from Sonoma County, now living in Vancouver. Her wine blog is Tasting Room Confidential and you can follow her on Twitter.