On Global Television’s Morning Show Thursday, we paired wine with many types of hamburgers.

Nothing says summer like a juicy two-fisted burger and beer – it’s casual and a good pairing. But what if you want wine with your patti?

Wine is also a great pairing, but we think it’s too fancy for the backyard and burgs. However it’s not, and it has a wide range of flavours and styles for the imaginative burgers we have here today. 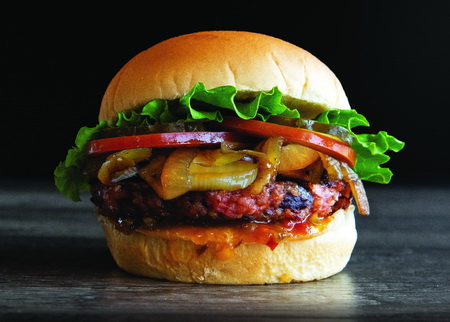 In the beginning, Shant Mardirosian, the founder of the Burger’s Priest, wanted to be a pastor. Burgers weren’t part of the plan.

Mardirosian didn’t grow up religious, but became a Christian when he was 19. He studied at Tyndale University College, an evangelical school in Toronto, earnestly praying and struggling to discover his life’s purpose. Eventually he dropped his dreams of ministry and came to terms with his entrepreneurial instinct.

As a California native Shant grew up with old fashioned burgers and worked in restaurants and after eating a PJ Clarks burger in New York City he decided Canada needed a burger revival. It took some time to scrape together enough money for his first location, a tiny hole on Toronto’s Queen Street opened in June 2010. The timing was auspicious, as a burgeoning foodie scene quickly dispersed his gospel via social media. Eager devotees would walk an extra mile for a no-nonsense meal, then line up and down the block to order juicy offerings from a repurposed hymn board. “God had something to do with it as well”, he says.

To the uninitiated, “priest” might seem like a mockery of high church ceremony. But the restaurant name is actually Protestant in inspiration, based on the idea that anyone, anywhere, can bring the sacred into the mundane. He’s OK when people don’t even notice he’s not just being playful.

“It’s a part of me, a part of who I am, so it’s a natural extension of my personality,” he says. “I have so many customers who have come in for years, and have said, ‘I thought this was a joke until I went and looked at your website.'” In-N-Out Burger is an inspiration for The Burger’s Priest. Like the Southern U.S. chain, the Priest emphasizes simplicity, purity and tries to pay higher wages. There are subtle differences, too.

The Burger’s Priest slaps full bible narratives on the wall in ancient languages. They’re not preachy passages, either. Faith might be integral to the Founder’s identity and brand, but there maintains a separation of church and plate as The Burger’s Priest knows business was built on shaping beef, not believers.

Shant is involved in naming the burger names and some, but not all, are biblically inspired. We feel it is important for them to have a story to connect to that identifies with the burger and why we put it on the menu.

This first burger, The Daniel, is a vegetarian burger inspired by a biblical passage where Daniel denounces the king’s food and asked for a test to only be served water and vegetables for 10 days.

The sweeter the toppings, the more a wine with acidity is needed. Ketchup, relish and caramelized onions add sweetness and require high acid reds – though ketchup is probably sacrilege to the Burger’s Priest.

Whites can still be a match, but they too need to have generous acidity, and not too much buttery notes. 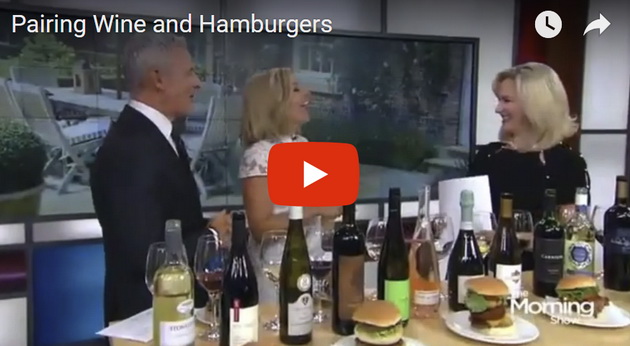 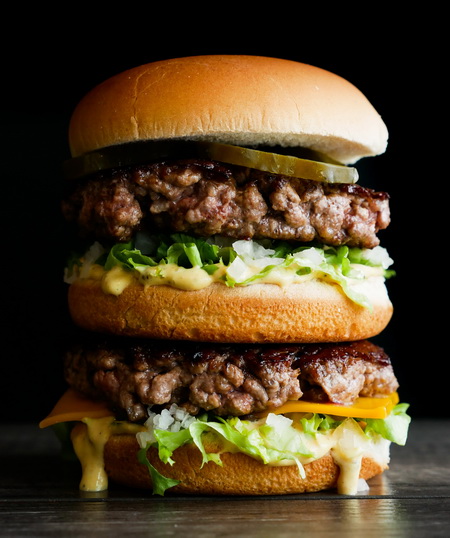 Can you guess the inspiration for this burger?

It’s all about the fixins – just like chicken can be made so many different ways, so too can burgers. Pair your wine to the garnishes.

The Burger’s Priest Restaurant
Toronto, ON 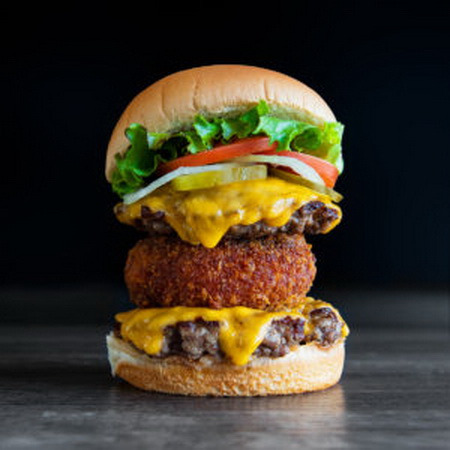 Toppings that aren’t too sweet, like Dijon-style mustard, sliced onions, fresh tomato, and lettuce, are good with fruity wines.

Sparkling wine work well with salty foods, the same way that beer works so well with burgers, nuts and chips. It lightens the food and quenches your thirst from the salty taste. 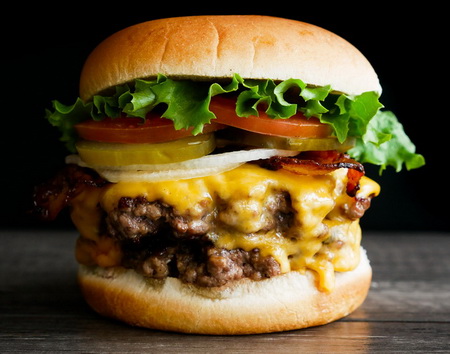 Cheese adds a creamy texture and a tang from the salty taste.

Burger wines need tannins to handle the meatiness and protein of the beef, but they must also need luscious fruit aromas and flavours for the garnishes. 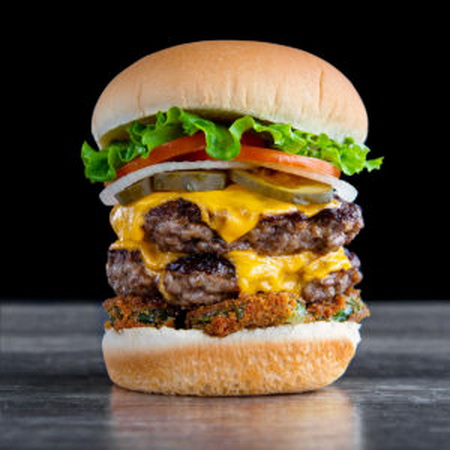 Smoky and salty garnishes such as bacon and blue cheese go well with red wine that has lots of berry flavours . 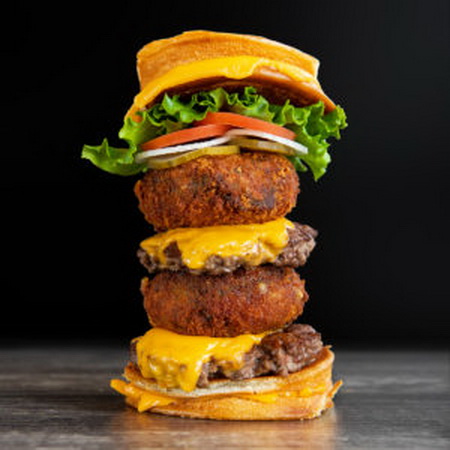 The Four Horsemen of the Apocalypse

The Four Horsemen of the Apocalypse is two beef patties and two options sandwiched between two grilled cheese buns.

There are two Portobello mushroom caps, stuffed with a blend of cheeses, rolled in panko bread crumbs and deep fried to perfection.

Dressed as per the customers’ specifications.

For this apotheosis hamburger, choose the wine you’d want to drink at the end of your time — or all time ;)

There are so many flavours here that it’s hard to go wrong. The only sin would be not enjoying your wine. 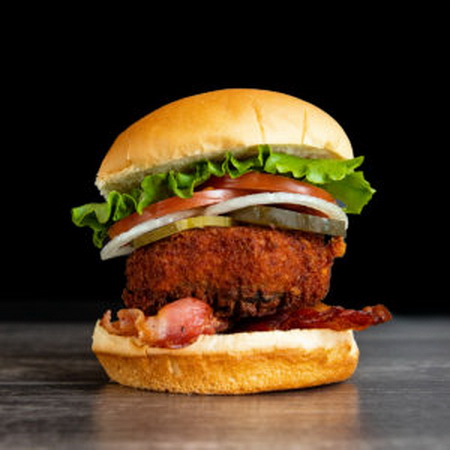 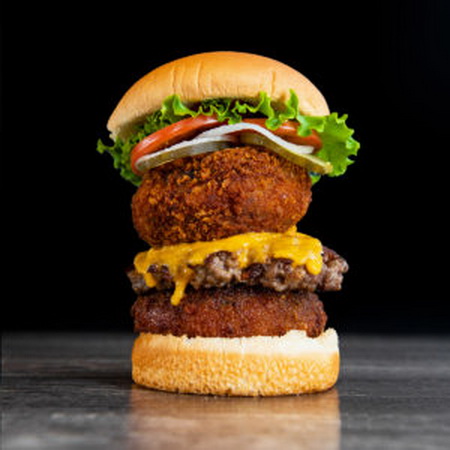 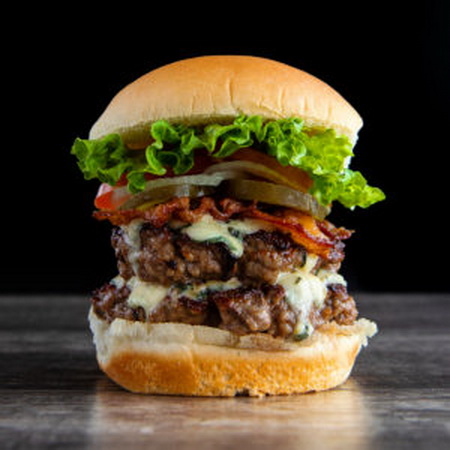 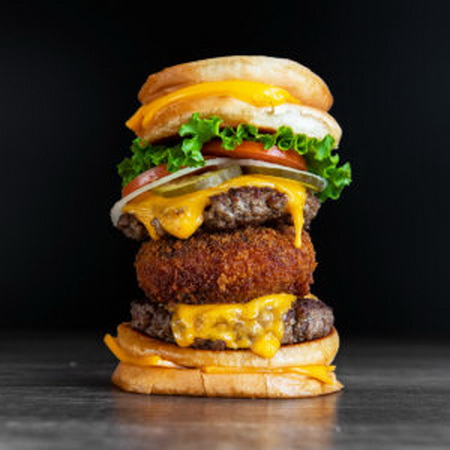 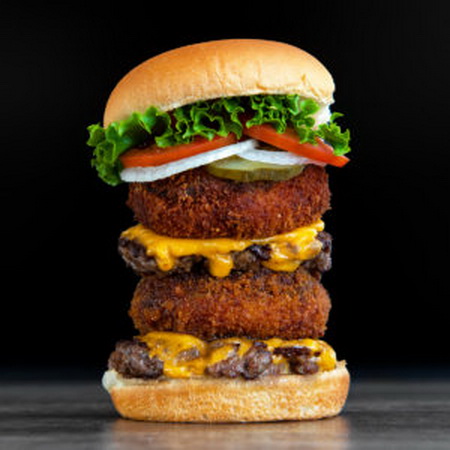 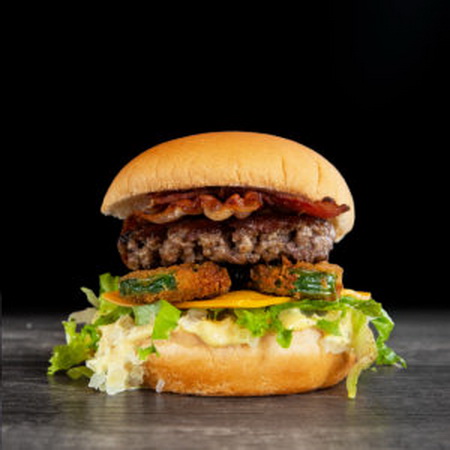 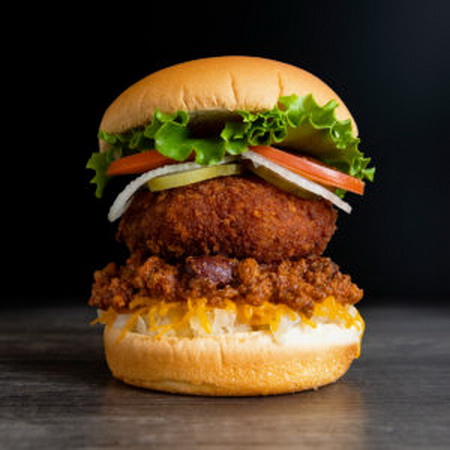 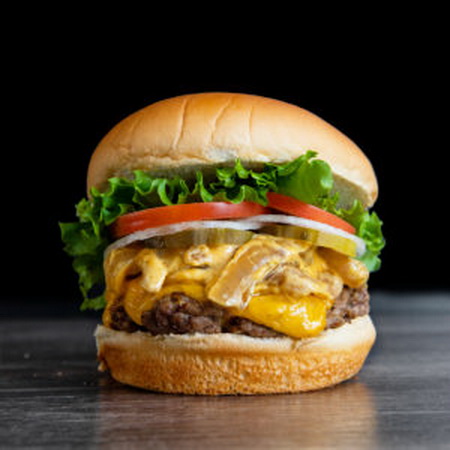 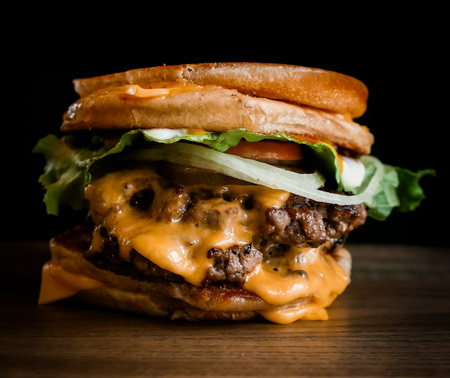 Posted with permission from Global TV