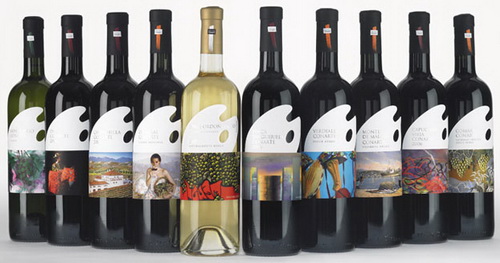 And while it may not be ironic that you can buy the print of the label more easily than you can the wine itself, it certainly is a paraducks.

Perhaps Kenwood Vineyards, of Sonoma, California, wished it had gone with an inoffensive iguana for the 1975 label. 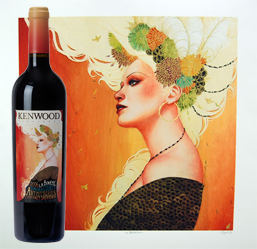 But the very first label it proposed for its Artist Series ran into trouble with the authorities. That was “Naked Lady,” by San Francisco artist David Goines, who had also painted for the Ravenswood and Mount Veeder wineries, as well as the famed Chez Panisse restaurant in Berkley.

However, the Bureau of Alcohol, Tobacco and Firearms (BATF) informed the winery that its rendering of the young lady reclining on a vineyard hillside was “obscene and indecent.”

A second Goines label effort, entitled “Bones on Vines,” featuring a saucy skeleton on the hillside was also rejected—presumably on the grounds that you don’t joke at the federal authorities’ expense. The third version, showing just the grassy hillside, was acceptable.

It took nearly twenty years before the authorities approved the original nude watercolor, which finally appeared on the 1994 label.

European imports have also run afoul with the BATF. Even the great Château Mouton Rothschild had its 1993 label rejected: a reclining nude nymph by renowned French artist Balthus. 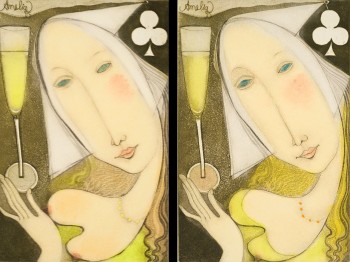 Aware of America’s aesthetic temperance, Australian winemaker Peter Lehmann decided to head off trouble before it started. His 1999 semillon label bore a tasteful topless woman painted in the style of a Modigliani Madonna.

But he shrewdly asked the artist Anelia Pavlova to paint a dress onto the woman for bottles sold in the U.S. and Canada.

The BATF is an equal-opportunity killjoy: in its view, what’s bad for the goose is bad for the gander too. It also rejected the label for the Napa Valley winery Clos Pegase’s 1988 Hommage Red Table Wine, which bore a naked man on the label: Bedecked Nude by Jean Dubuffet.

The bureau did approve a “cropped” version of the image, and then inexplicably reversed its original decision, and approved the Full Monty version.

Apart from the bureaucrats, these bans titillate one group in particular: wine label collectors, or rather, vintitulists.

Many aficionados belong to the Wine Label Collectors Club of America, headquartered in Los Angeles, with a quarterly newsletter.

Some groups are even more specialized, such as the Italian Association of Wine Label Collectors. There are dozens of online label galleries on the Internet, and even a gorgeous coffee-table book entitled Icon: Art of the Wine Label (Wine Appreciation Guild, $135).

For wineries that commission such art, the upside is that even in poor vintages, collectors will still buy the wine just to complete their set.

And as with any collection, the value of an entire series increases over time. At a 1996 auction in Toronto, the Royal York Hotel paid $40,000 for a collection of single bottles of Mouton Rothschild from 1945 to 1994.

These days, some wine lovers may have more masters in their cellars than the local art galleries. Next thing they may even have to hire a curator for their collection.

Now if only the galleries would serve something other than tasteless plonk at exhibition openings. 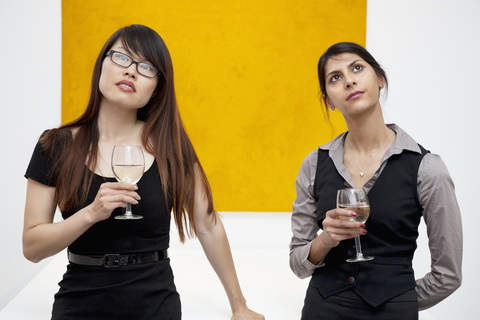