Leanne and I chat about what happens to our perception of wine when we fly, as well as other travel-related tips with wine.

In our first segment, we chat about my online wine course.

My dream flight begins with the wine selection: “We’d like to direct your attention to the wine list in the seat pocket in front of you.

You’ll note we have a fine selection of first-growth Bordeaux at the rear of the plane (using the double-arm, two-finger signal), 40-year vintage port is being decanted in the middle aisles and, for our first-class passengers, a vertical of Chateau d’Yquem 1945 through 1960, at the front of the plane. 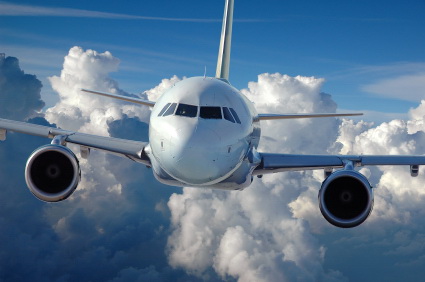 At any time during this flight, should you run out of wine, it is imperative that you help yourself before assisting other passengers. This will help reduce overall cabin pressure and the stress of your post-merger flight crew.

We realize that you no longer have a choice of airlines, but drink up, and we’re sure that we’ll all forget about those terminal delays and lost luggage that can really annoy anyone sober.”

Perhaps my silver-winged sybaritic dream is a stretch, but airline wine is the one aspect of flying that’s no longer a potshot target.

In fact, wine lists have improved, fueled by more savvy customers in a fiercely competitive worldwide industry. Airlines often have the same equipment, routes, fares and frequent flyer programs, so food and wine are one of the few ways to express individuality. 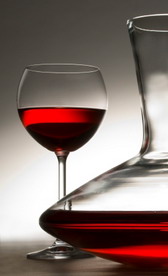 That’s why there are more premium brands on board including Starbucks coffee, Godiva chocolates, Ben & Jerry ice cream and meals created by celebrity chefs.

Indeed, British Airways’ research shows that the closer we get to flying, the more important food and wine become. When booking our ticket, it’s only the sixth most important factor.

However, when we’re standing in line at the gate to board, it’s number two after the attitude of the flight crew.

But let’s not kid ourselves about anyone choosing an airline because of the wine (Ticket agent: “That’ll be $3,456 for the wine, plus we’ll throw in a return trip to California.”).

That said, we’re no longer happy to drink a $6 bottle that devours .001 percent of our fare.

Ten years ago, that wasn’t uncommon. Wine selection was based mostly on price, and often the same wine was served year after year, even in bad vintages.

Most of us just want something pleasantly palatable to release the tension of running to the gate with a 30-pound shoulder bag and high heels, or to forget the big guy snoring next to us who has just rolled his head on to our shoulder.

Getting a wine to taste delicious at 30,000 feet isn’t easy though. After a few hours, we get dehydrated. Alcohol’s dehydrating effect compounds this, and we lose up to 30 percent of our ability to taste.

Wine’s aromas are flattened, and any element that’s out of balance such as tannin or acidity is emphasized. The wine hasn’t changed, we have.

British Airways once invited several wine writers to blind taste a group of wines at the Heathrow airport, more wines while flying aboard the Concorde to Barbados and then another set of wines once in a hotel in Barbados, where the poor souls completed their grueling day.

They unanimously judged the best wines were the ones in the Barbados, followed by those at Heathrow and then those tasted while flying.

Turns out, of course, that they were ….