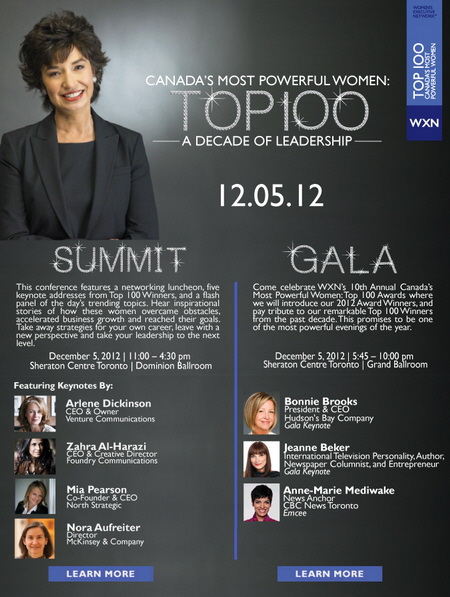 I’m looking forward to hosting a wine tasting at the Women’s Executive Network Summit on Wednesday. More than 500 power drinkers … should be fun! Here are the speakers throughout the summit … an inspiring group of women and topics.

Arlene Dickinson is a judge on CBC’s Dragons’ Den, the television phenomenon that has ignited a national conversation about entrepreneurs in Canada. Dickinson — aggressive but fair, kind but practical, serious but fun — is the show’s marketing expert, its lone female judge, and one of its breakout stars. Ranked as one of Profit magazine’s Top 100 Women Entrepreneurs for seven years running, she is considered one of the most powerful female business leaders in Canada today.

Dickinson is the owner and CEO of Venture Communications, a company whose guiding principle is that marketing be held accountable to business objectives. A 20-year marketing veteran, she grew Venture from a small, local firm to one of the largest independent agencies in Canada. (It’s repeatedly recognized as one of the 50 Best Managed Companies in Canada.) A mother of four, Dickinson is the recipient of the prestigious Pinnacle Award for Entrepreneur Excellence, and has been named one of Chatelaine’s TOP 100 Women Business Owners. She has also been inducted into Canada’s Most Powerful Women Top 100 Hall of Fame.

Zahra Al-Harazi is a true citizen of the world, having lived, studied and worked on three continents, and travelled them all. A storyteller at heart (ask her about the 4000 goats), Zahra lives and breathes design. Her passion for life and people have led her to be the best at what she does – instinctively knowing when a concept has the potential to transcend popular culture and evoke a genuine human response.

Under her watch as Creative Director at Foundry Creative, she consistently sees through the clutter and has the ability to mobilize the creative team where every thought, idea and concept has been challenged to be better. Zahra is a founding partner, can argue style in five languages, always has a “charm your socks off” smile, and is constantly busy reinforcing the awards shelf.

In addition to her client and practice development work, Nora leads the Toronto office of McKinsey’s Canadian Practice. She is responsible for managing the office’s client portfolio as well as the professional development of more than 100 consultants. Nora was the first woman in the Canadian Practice to be elected a Principal as well as a Director – and among the first women in the firm, globally, to be elected a Director.

Nora is one of the leaders of McKinsey’s North American Marketing and Retail Practices and is currently leading a global initiative on digital/multi channel transformation. She serves major retailers and other consumer-facing companies to help them strengthen their overall performance through strategy, change management, and operational improvement engagements. At the firm level, Nora has been a key member of the global personnel committees responsible for electing and coaching new partners. She has also co-led initiatives to advance women within McKinsey and led the development of a global women directors group.

In the course of her career, she has worked in the Toronto, Boston, New York and San Francisco offices. Nora has been a keynote speaker at numerous events; she spoke most recently at WWD’s 100th Anniversary CEO conference. She has also written articles for The McKinsey Quarterly, Ivey Business Journal, The Globe and Mail, Harvard Business Review, Advertising Age, and Journal of Market-Focused Management.

A combination of entrepreneurial spirit and timing led Mia Pearson to co-found North Strategic, a communications agency built on the belief that social needs to be integrated into everything you do. A serial entrepreneur, Ms. Pearson left her position as regional president for Fleishman HIllard Canada, and co-founder and CEO of High Road Communications, to start a new company in an effort to set the standard in social PR.

Ms. Pearson is known as an innovator, a creative strategist, and a pioneer at fusing digital integration with traditional PR. Her focus on pushing the boundaries of conventional public relations and embracing new ideas and original thinking keeps her at the forefront of the industry. She works with clients to strategize and execute at the highest levels with some of the world’s most exciting brands.

With nearly 20 years of integrated communications experience, Ms. Pearson has led some of the industry’s best known launches and worked with clients such as Microsoft, LG, TELUS, Pepsico and Canadian Tire on some of their most complex issues and creative opportunities.

She sits on the advisory board for Marketing Magazine, the board of Trans Canada Trail, and she is a member of CATA’s board of directors. Ms. Pearson is known for building high-performance teams, creating award-winning best-place-to-work environments, and turning around companies. She writes a weekly column for the Globe and Mail on social and earned media. In 2010, she was a winner of Canada’s Top 100 Most Powerful Women in the corporate executive category.

Ms. Pearson is a regular speaker at industry events on the importance of personal branding and she is passionate about advancing the careers of women in business. A mother of two, she is an avid snowboarder and she loves spending time at her cottage on Georgian Bay.

At the World Food Media Awards in Australia, Canadian journalist Natalie MacLean was named the World’s Best Drink Writer. She is the only person to have won both the M.F.K. Fisher Distinguished Writing Award from the James Beard Foundation and the M.F.K. Fisher Award for Excellence in Culinary Writing from Les Dames d’Escoffier International.

Her columns have appeared in more than sixty newspapers and magazines, including the Bon Appetit, Food & Wine, Reader’s Digest, Forbes, BusinessWeek, Conde Nast Traveler and Air Canada’s enRoute. Her newsletter reaches more than 145,000 wine lovers. She is the author of the bestseller Red, White and Drunk All Over. Her second book—Unquenchable: A Tipsy Quest for the World’s Best Bargain Wines—has just been published in paperback and e-book and is available in bookstores and online.

She is an acknowledged social media expert in the wine industry with thousands of followers on both Twitter and Facebook, and offers mobile applications for iPhone, iPod Touch and BlackBerry.

A Rhodes Scholarship finalist, she studied nineteenth-century English literature at Oxford University in England, earned an honors Bachelor of Public Relations (MSVU Halifax), and took an MBA with distinction (UWO London). However, all of this training is irrelevant to her current preoccupation. Instead, she credits the long line of hard drinkers from whom she descends for her ability to drink like a fish—and for the motivation to write about it, in a transparent attempt to make it look respectable.