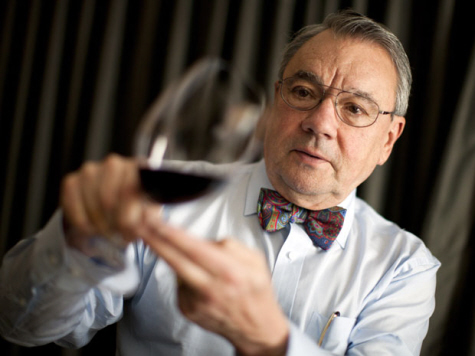 Wolfgang Blass says women are his long time weakness and the secret to his success.

In a recent interview with the thrice-married raconteur behind Australia’s Wolf Blass wine label, females were a frequent topic, both for a good bon mot — he repeats his oft-quoted trope, that his wines “make strong women weak, and weak men strong” — and detailing a canny business strategy.

Mr. Blass, 78, was in Toronto last week to support the brand’s extensive film festival sponsorship, and chronicled how he left war-torn Germany at age 23 to pursue winemaking. Now the fourth largest wine exporter in the world, Wolf Blass Yellow Label is the best-selling cabernet sauvignon in Canada, topping two million bottles a year.

“Germany was totally deflated,” he recalled. “The only way my parents thought they could get rid of this boy [as a teen] was to send me to a wine farm where there would be accommodation, food. Once I got my feet on the ground, I later moved from viticulture into winemaking.”

Mr. Blass first went to France where he studied champagne-making, then worked in England for an importer before being approached by Kaiser Stuhl Wines, a Barossa Valley co-operative, for a three-year contract.

“I had tasted some [Australian] wines at the importing organization in London, and the bloody wines were awful,” he said. “I thought ‘I can’t go wrong,’ and I took a three-year contract with Kaiser Stuhl to make 80% of their pearl and sparkling wines.”

Over the 1960s, Australia began transforming into a wine and coffee-drinking culture. “Before then it was all beer, port and sherry.”

If wine is not suitable for women to enjoy, it will not sell.

Mr. Blass sold his business to the Australian wine company Mildara in 1991, which was later acquired by Fosters Brewing in 1997 and spun off last year into Treasury Wine Estates, which also owns the Penfolds, Beringer, Rosemount and Lindeman’s brands. He has worked since as the public face of the brand, flying around the world as an ambassador for his label, and is derisive of most traditional European wine, deeming it less “drinkable” and enslaved to tradition.

“New world wine, including Canada, has been far more innovative in producing products because they are applying technique and concentrating on drinkablity to the consumer — not being stale, which is the big problem in Europe.”

When Mr. Blass struck out on his own in the 1970s, he decided to make an overt play for the female consumer, both through the flavour profile of his top-selling wine and his bold, monochromatic labels, and in doing so helped put Australian wines on the global map.

“If wine is not suitable for women to enjoy, it will not sell,” he said. “The softness and easy drinking has brought about that women actually enjoy drinking wine.”

The solid-colour labels were a ploy for attention but also made it easy to distinguish grape varieties, said wine expert Natalie MacLean, author of Unquenchable: A Tipsy Quest for the World’s Best Bargain Wines. Wolf Blass’s labels played a key role in appealing to women.

“They are very striking compared to European wines where the label is all white, there is a castle in the middle distance and no grapes [listed] on there,” she said, making the Blass wines more accessible.

To that end, numerous winemakers have made an overt play for women with such brands as Girls’ Night Out, Little Black Dress, Cupcake Red Velvet and Mad Housewife. “Some labels are kind of hit-you-over-the-head marketed to women,” Ms. MacLean said. “Some of them are OK, but they make me skeptical about how much of that is marketing. I am trying to find out what is behind the label.”

That’s critical in a market where women consume 55% of wine but buy about 80% of it, the case in Canada and Australia.

“We are the household purchasers of just about everything from Shreddies to SUVs, we are the dinner planners, the social planners, and the cooks — if you want to get stereotypical,” Ms. McLean said. “Wine is more of a lifestyle thing, it is part of a beautiful life.”

Yellow Label’s price point is also appealing to female consumers, according to an LCBO study that showed women buy twice as much wine in the mid-end price range where Wolf Blass trades.

George Samios, global spokesman for the Wolf Blass brand, said the brand has a history of sponsoring arts and cultural events in Canada. “We sponsor a lot of things like the film festival, the Playhouse in Vancouver, the food and wine festivals, because you can’t do mainstream, above the line [ads]. But if you can associate with food and the arts and fashion — things that women also tend to be interested in — there is a nice link.”

At the recent Toronto International Film Festival, Wolf Blass was the wine of official parties and events. Samples of the wine were in TIFF gift bags, and a contest was held to have dinner and a wine-tasting with Mr. Blass.

The company also markets through a heavy social media presence and is one of the most popular wine sites globally on Facebook, where it was recently ranked in the top 10 for daily engagement. And wine drinkers seem to be a social bunch: a U.S. survey by the Wine Market Council found that 73% of regular wine consumers in the U.S. were regular Facebook users.