On Global Television’s Morning Show today, we chatted about wine and spicy food pairings than to celebrate Cinco de Mayo.

What better time to explore these than on May 5, the day in 1862 when a rag-tag Mexican army defeated the far larger French forces under Emperor Napoleon III.

Sure, you could toast with a cerveza or tequila, but which wine? The growing Mexican wine industry is gaining respect, particularly the region of Baja California, and among the leading producers is L.A. Cetto, creating exceptionally well-priced red wines.

But let’s broaden the field, and look at wines from around the world to complement the fiesta dishes that include the diverse and spicy dishes of Mexico such as tacos, enchiladas, tamales, pinto beans, Spanish rice, jalapeno corn bread, corn chips and salsa.

(Really, do we need an excuse to eat more corn chips and salsa?)

Then there’s burritos and guacamole. According to the California Avocado Commission, May 5th is the biggest consumption day of the year, with Americans consuming 50 million avocados.

There’s also the specialty dish of a mole, usually chicken in a dark sauce that’s a blend of onion, garlic, chiles, sesame seeds, and a small amount of Mexican dark chocolate that adds richness not sweetness.

Playa Cabana’s Executive Chef Dave Sidhu of Cocina Economica, a Mexican bistro in Toronto’s Corktown district that serves home-style Mexican cooking, like the family-run cocina economicas found across Mexico, prepared some terrific dishes for us to try with the wines: 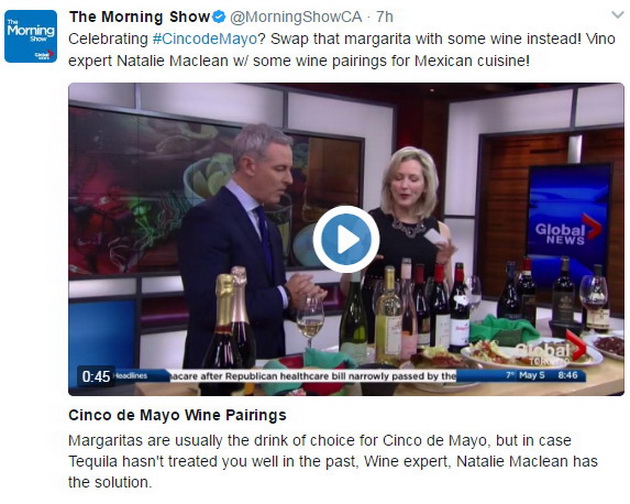 Wines that can take the heat

When faced with spicy cuisine, wine lovers don’t have to cry in their beer. Fiery dishes such as pad Thai, jalapeño-stuffed burritos, Indian tandoori, Texas barbecue, Cajun crabs and gumbo, Szechuan kung pao pork, or Jamaican jerk chicken, are cuisines that didn’t develop alongside regional wines over centuries as did European fare.

Trying to find wines that will complement food that is at once sweet, sour, and spicy can be a challenge but here are several tips to help you choose.

The flavors that survive heat are sweet and sour. That’s why both crisp and slightly sweet wines can cool the palate after a fiery onslaught. Examples include wines made from riesling and muscat.

Look for those from cool climate regions, such as Germany, Canada, and Alsace where the wine preserves its refreshing acidity. These wines are the equivalent of diving into the ocean after getting a sun burn: invigorating and soothing.

Long after you’ve swallowed, their silver thread of acidity lasts as long as the hot wire of spice in your mouth. They also have complementary aromas and flavors of spices, limes, lemons, green apples, and flowers.

For hotter dishes, such as pad Thai, mustard-based fare and wasabi (green horseradish paste), Cajun (from the Nova Scotia Acadians who were exiled to Louisiana in the seventeenth century by the British) and Creole (from New Orleans itself), a touch of sweetness helps to quench the flames when bone-dry wines taste too austere. A little sweetness won’t taste syrupy if it’s matched by crisp acidity. Try German riesling, especially those labeled from the first two categories in the range from semisweet to the sweetest: kabinett, spätlese, auslese, beerenauslese, to trockenbeerenauslese. (The latter three are dessert wines and therefore too sweet.)

Mosel region rieslings tend to be lighter in body and alcohol and therefore better with these foods than those from the Rhine. For wines from other countries, look for “off-dry” on the label or a sugar code of 1 to 3, as 0 is a completely dry wine and dessert wines are about 15 to 20. For this reason, rosé and white zinfandel work well.

(Yes, I said white zinfandel, that’s not a typo.) These also work well with sweet-and-sour Chinese sauces and ingredients such as pineapple, coconut, and sweetened yogurt.

Capsicum, the compound in chilies that makes them hot, doesn’t wreck wine’s flavors, but it does diminish our perception of them. So choose value-priced wines since the fine nuances of expensive wines are easily obliterated by bold flavors.

Don’t add fuel to the fire

The heat from spicy dishes not only numbs your palate, it also creates a stinging sensation when it reacts to alcohol, making the wine feel hotter than it actually is. High alcohol wines are like lighter fluid to a campfire: the flavors of both the food and wine go up in smoke.

Salt—prevalent in soy, oyster, and fish sauces—also accentuates alcohol. So look for lighter-bodied wines with an alcohol content of less than 12 percent. These come from the cool climate regions mentioned above since the grapes don’t ripen as fully as in hotter climes, resulting in wines with lower levels of alcohol.

Gewürztraminer is liquid salsa to many spicy dishes. The direct translation of the German word gewürz means “spice,” which may be why it has become the default wine for any spicy dish.

However, the wine is more perfumed than it is spicy, and personally, I don’t think it deserves such a wide reputation for these dishes. The dry versions are often too austere for some spicy dishes that cry out for a touch of sweetness and the wine’s assertive aromas of rose petals and lychee nuts are not to everyone’s taste.

Instead, try exotically perfumed wines from France made from the grapes marsanne and viognier, or from California white blends such as: Symphony Obsession and Bonny Doon Ca ‘ del Solo Malvasia Bianca. Even though I believe that white wines generally go better with spicy dishes, there are several reds that work, especially round, smooth ones that are like plush cushions to soften the spiciness.

These absorb the heat without overwhelming the flavor of the food and work well with mild Indian tandoori, chicken tikka masala, and gentler curries.

Plummy reds with supple tannins are ideal, such as Chilean merlot; Californian zinfandel; French beaujolais and gamay; and pinot noir from Canada, Oregon, California, and New Zealand. Australian shiraz cuts both ways in style: some are plush and smooth (these work), while others are peppery and tannic (these don’t).

Likewise, heavy doses of tannin and oak mask the fruit flavors and acidity in wine, and aggravate the perception of heat.

Tannin and spice are both tactile but in different ways and tend to rub against each other; one inevitably dominates and diminishes the other. (Tip: I find that reds served a little cooler than room temperature are more refreshing when they’re partnering with spice.)

Many non-European cuisines involve serving a range of dishes at a meal, so there’s no one perfect wine.

Why not take a dim sum approach to choosing your wine: sample several to find the ones you enjoy most. It works for almost all but howlingly-hot dishes which are too volcanic for any liquid except lava. For these I recommend water—from a fire hydrant.

Posted with permission from Global TV