Recently on a cold January afternoon in Ottawa a small group of sommeliers and wine writers had the fortune of spending an afternoon with the legendary Chris Hancock, MW (Hon.), of Robert Oatley Vineyards at the Empire Grill in the Byward Market.  Chris led us through a tasting of nine of his wines in the Robert Oatley portfolio of wines.

First of all, a bit of background about Chris Hancock.  After graduating from his studies in Oneology, and long before joining efforts with Robert Oatley in 1975,  Chris  worked at Penfolds where he produced six vintages of Penfold’s iconic Grange wine between 1965 and 1973.

Fast forward nearly 40 years and this Australian wine making legend is still at it.  With countless accomplishments and distinctions (far too many to mention here), however, one notable distinction was when we was bestowed with an honorary Master of Wine in the early 1990s.  One of only a handful given out. 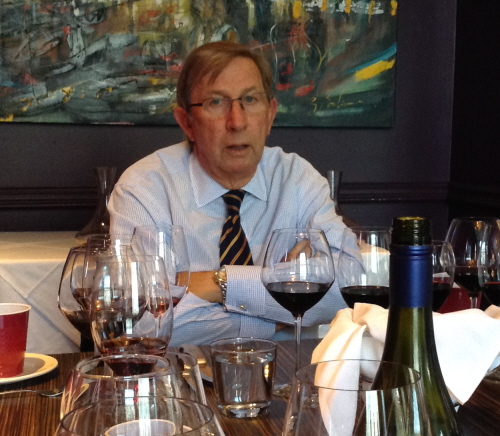 Chris Hancock, MW, was pouring wines from the Tic Tok Pocketwatch label, Robert Oatley Signature Series, and finally the Four in Hand, of which Chris is the winemaker.

Immediately upon tasting the first wine, a Robert Oatley Signature Series Great Southern 2012 Riesling (Vintages 357426,Feb 1, 2014 release), I was impressed with the delicacy of the wine, the purity of the fruit, and the absence of what I’ve been accustomed to tasting with many value priced Australian wines (i.e. jam and syrup).   This was a very different style of Riesling compared to fuller bodied Australian Rieslings.  Comprised of grapes from three regions within the The Great Southern zone, this wine exhibited characteristics of a cooler region that were very refreshing.  Crisp, light petrol notes, rose notes, minerality, creamy with a steely acidity that persists.  At $18 (Vintages February 2014 release) this wine offers exceptional value.  90+ points.

Next we tasted two Sauvignon Blancs, a 2012 Tic Tok Pocketwatch from Western Australia ($14.95 LCBO GL 187039), and a 2012 Robert Oatley Signature Series from Margaret River ($17.95, not available in LCBO yet).  Both were impressive, the Tic Tok less delicate yet very expressive with great acidity and exotic fruit characteristics.  The Maragaret River SB was delicate with declicous passion fruit, lychee, asparagus, lemon, and cantalope notes.   Very different stylistically from New Zealand Sauvignon Blanc, however, they both were very approachable with attractive texture and purity of expression.

Chardonnay was next.  We tasted the 2012 Tic Tok Pocketwatch Chardonnay from Central Ranges ($14.95 LCBO GL 187104), and a 2012 Robert Oately Signature Series from Margaret River ($17.95, Vintages 350900 January 4, 2014 release).  Two Chardonnay’s from opposite sides of Australia (in the order of ~3,000km apart). The Tic Tok had a delicious nose of tropical fruit, butterscotch, creamed corn, with a creamy mouthfeel, and a repeat of the aromas on the palate.  A terrific expression of lightly oaked Chardonnay with all the elements that I expect at that price point. 90+ points.  The 2012 Robert Oately Signature Series Chardonnay from Margaret River ($17.95 Vintages 350900, January 4, 2014), was a terrific expression of medium weight Chardonnay from the well known Margaret River region.  Limited oak influence (20% new French oak), and no malolactic fermentation produced a refreshing and delicate wine that would be terrific complement to many lighter dishes.

Chris described how Robert Oatley Vineyards only uses French oak in their portfolio so as to have minimal oak influence on the wines, which is a divergence from the heavy oaked wine styles that Australia and other new world wine producing regions have been known for.

I asked Chris what their main focus is with respect to wine style and he said they focus on 1. Texture, and 2. Purity of Expression, and try to achieve the highest phenolic ripeness in the fruit at the lowest alcohol level in order to maximize varietal characteristics at the lowest possible sugar level.  Chris’ goal is to produce a wine that feels like “angels dancing on your tongue”.   Sounds divine!  It was evident from the nine wines we tasted across their portfolio that they’ve made a major stylistic shift towards producing delicate, expressive and focused wines, with absolutely no jam or syrup.  I was impressed with this shift and the resulting end products. 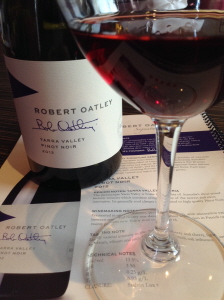 We tasted four reds next.  A Pinot Noir and three Shiraz’s.

4. 2012 Four in Hand Shiraz Barossa Valley (not available in LCBO yet).  Chris Hancock’s winemaking result.  Although one can’t compare this to the Penfold Grange he has made in the past, it is a great effort.  This medium-full style Shiraz exhibits layers of dark fruit, blackberries, bitter chocolate, and baking spices. Drinking great now and Chris noted that it will continue to for upwards of 7 years, but why wait!?

All in all an exceptional tasting experience with a legendary Australian winemaker.  If you haven’t tried any Robert Oatley wines, give them a shot.  If you’re on a shoe string budget, start with the Tic Tok Pocketwatch label as each wine I tried in that range was over delivering on quality and value.

Matt Steeves, is an Ottawa-based accredited sommelier and co-founder of Quercus Vino (@Quercusvino).  A passionate wine-enthusiast, Matt has visited many of North America’s wine regions which has given him an appreciation for the stylistic differences that each region’s unique climates and soils can produce.

Matt is an avid supporter of the growing Canadian wine industry and is proud to say there are world-class wines being produced in each of Canada’s major wine making regions.

You can also see reviews by Heather Wall and Jayne Staples.