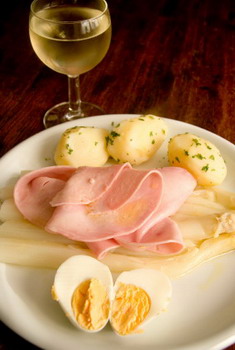 This story by Shawna Wagman originally appeared on Ottawa Magazine.

Eggs are not an ideal mate for wine but mimosas do the trick. For MacLean, eggs are a stomach-filler needed for drinking.

The Eater: Natalie MacLean is Canada’s best-known wine writer and self-styled “wine cheapskate”. She is the author of Unquenchable: A Tipsy Quest for the World’s Best Bargain Wines, which was recently awarded a Taste Canada food writing award for the best English-language culinary narrative.

The Place: I learned my lesson dining out with MacLean a few months ago at Brothers Beer Bistro; for her food is an afterthought, all roads lead to wine. I thought she might be curious about what was happening in the world of craft beers but instead she called ahead and made sure they had a decent wine list before agreeing to join me there. Since my love of food led to an appreciation of wine, I had assumed (wrongly) the opposite would be true for her. As MacLean herself says, “I only care about foods as it intersects with wine.”

So when it came time to choose a destination for Eggville, MacLean was stumped — eggs apparently do not pair well with wine. All anxiety was alleviated when I mentioned in my email that we could go to Oz Kafe’s Hangover Brunch. I assured her that there were mimosas on the menu. She wrote: “My god, that’s perfect!!!! I haven’t even heard that place but it’s already my absolute favourite.” 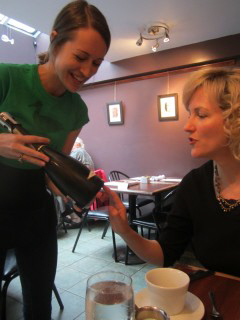 This was probably the first time the Oz Kafe server was asked which sparkling wine was used in the mimosa (answer: Prosecco).

The Order: In preparation for this meeting, MacLean volunteered — without prompting — to arrive for brunch with a proper hangover so that she could appropriately experience the Hangover Brunch (“I am a thorough and hedonistic researcher,” she quipped). She ordered a mimosa to start and the Rice Bowl, a dish described as steamed rice, fried egg, veggies, tofu & Korean barbeque sauce. She pointed out that Asian dishes are traditionally wine killers but she is always up to the challenge: “Think of me as your red-nosed super-hero, I am here to help.”

The Method: Before our food arrived, MacLean offered me a quick primer on the problem of pairing wine with eggs. Theory #1 is that the sulphur compounds in eggs conflict with wine; Theory #2 is that the iron in the yolk fights with the tannins in the wine; and Theory #3 (her preference) is that eggs are so mouth-coating that you can no longer taste the wine. “My rule is: yolk + oak = no,” she added, “If you want to be mean to someone given them an oaky chardonnay with eggs.”

As she sipped her first Mimosa and smiled contentedly, she explained that it’s no coincidence that the orange juice and bubbly cocktail pairs nicely with eggs: MacLean says that the bubbles act as a palate cleanser to help resolve the mouth-coating issue while the juice adds a bit of sweetness. Some people believe the fattiness and protein content in bacon and eggs battles against a hangover, but MacLean claims her “extensive research” on hangover remedies has proven that nothing really works. By ordering her second mimosa, I believe she was hoping to demonstrate the so-called “hair of the dog” theory in which a hangover is alleviated by further alcohol intake. 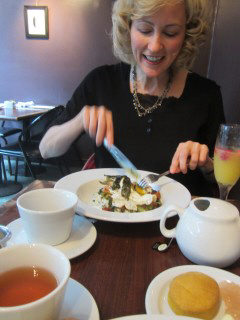 The Analysis: Long before I met MacLean in person, I had seen many photos of her online and on her book jackets and was captivated by her striking beauty: curiously thick, golden ringlet curls, smooth as porcelain alabaster skin, cherry-stained lips — all characteristics of femininity from another era.

I wondered if her deliberately girlish look was the product of marketing and air-brushed photography or if indeed she would look like a vintage Shirley Temple doll in person. She does. And something about the softness and innocence of the way she looks doesn’t quite connect for me with her razor quick wit, her life of world travel and fierce ambitiousness. It feels like a mask.

In the interest of armchair analysis here, I tried to scratch beneath the surface over brunch, hoping the relaxed setting and some mimosas would lure MacLean out of her comfort zone. But in the parlance of PR, she never goes off message. We talked about the fact that MacLean is not a cook, but that scrambled eggs (one egg plus two egg whites, no salt) with applewood smoked cheddar is one of the two things she knows how to make (the other is spaghetti with sauce from a jar).

Again, it’s all about the wine. At the same time, there is something honest about that. I truly believe that wine is the backbone of her world and is what structures her life, the way food does for many of us. When her rice bowl arrived, she gobbled up the crispy fried egg first and then worked around the outside of the bowl to scoop up the rice and finally the mushrooms, kim chi and bok choi, until all that was left was a lineup of lonely green beans. She cut those up with a knife and fork and dutifully ate them. When I asked if she always cleans her plate like that, she flashed me a coy grin and said, “I’m a very good girl.”