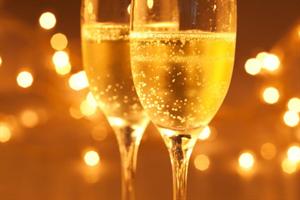 Champagne can only be produced in the French region that bears its name, but the joy that comes from hearing a cork pop can come from any number of other sparkling wines – at a fraction of the cost.

"The central problem is that wine pricing is almost completely arbitrary … the price of a wine does not significantly correlate to the pleasure it brings," said Robin Goldstein, editor of "The Wine Trials," an annual guide to wines under $15 a bottle that beat wines costing $50-plus a bottle in blind tastings.

But in the latest edition of "The Wine Trials" most wine drinkers reported again that they preferred a $12 bottle of Domaine Ste. Michelle Cuvee Brut from Washington State to the $150 Dom Perignon.

"At a minimum it seems clear that many Americans might be wasting at least $138, at least where taste is concerned," he said. 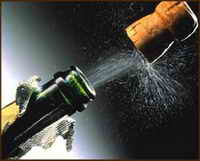 Natalie MacLean, the Canadian author of "Red, White and Drunk All Over," agrees that sparkling wine can be good value.

"There are some terrific bubblies that will add sparkle to your holidays without taking a shine to your wallet." said the author, who also has one of the web’s largest wine sites: nataliemaclean.com.

MacLean suggests Santa Margherita Prosecco Di Valdobbiadene Brut, from Italy, which she describes as surprisingly rich and toasty, yet packed with luscious peach and pear notes.

Her second pick is Freixenet Cordon Rosado from Spain, a sparkler she says that offers lovely aromas of fresh raspberries and strawberries.

For Madeline Maldonado, wine director of the Lelabar in Manhattan, her favorite Champagne alternative is Sekts, the sparkling wines made in Austria and Germany.

"I really like the Riesling and Gruner Veltliner ones. People hear Riesling and think a still white, but it really is wonderful when turned into something sparkling." she said, adding her favorite at the moment is a 2005 Ratzenberger.

Sparkling wines are made in any number of places. One of the best known in Greece, Amalia Brut Sparkling wine, is made by Yiannis Tselepos from Moschofilero grapes. It has the aromas of pear, honey and lemon as well as the bubbles.

Australia produces any number of sparkling wines based on Shiraz packed with the aromas of blackberries and chocolate.

Value is in the wallet of the beholder and can come at any price point level. New Mexico’s Gruet Brut NV, made from Chardonnay and Pinot Noir, two of the three traditional Champagne grapes, can hold its own against many of California’s sparklers that cost twice as much.

At the higher end of the price spectrum, if Bollinger RD 1997 or Krug Brut Grande Cuvee is being considered, Giulio Ferrari 1997 at roughly two-thirds the price would be a bargain.