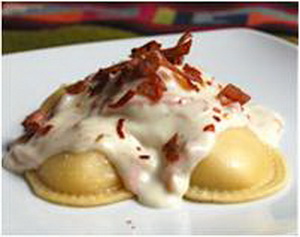 Sorrentinos are round raviolis, filled with ham, mozzarella cheese and ricotta. They’re not from Sorrento – they were invented in the resort town of Mar del Plata.

In Argentina you can buy a special type of deep ravioli mold called a “sorrentinero” that is used to make the exact sombrero-like shape of these pastas.

If you make these from scratch, you can fill them with ham, mozzarella, and ricotta, and serve them with any sauce.

Or buy widely available ricotta-filled raviolis, and serve them with this creamy ham and mozzarella cheese sauce on top – a sort of “inside-out” version of this classic Argentinian dish.

Bring a large pot of salted water to a boil.

Melt 3 tablespoons butter in a saucepan, then whisk in 2 tablespoons flour. Cook, stirring, until mixtur

Whisk in milk and cream, and continue to cook over medium heat until sauce just comes to a boil and thickens.

Stir Parmesan and mozzarella cheeses into sauce and remove from heat. Stir until cheese is well melted.

In a small skillet, melt remaining 2 tablespoons of butter. Sauté the diced ham until it browns slightly and becomes a little crispy.

Add most of the ham to the sauce, setting a couple of tablespoons of ham aside for a garnish. Keep sauce warm over very low heat while pasta cooks.

Cook pasta according to package directions. Drain well and serve warm, topped with the ham and cheese sauce. Garnish each serving with some of the cooked ham and a sprinkle of red pepper flakes.

This recipe was developed by Pascual Toso.