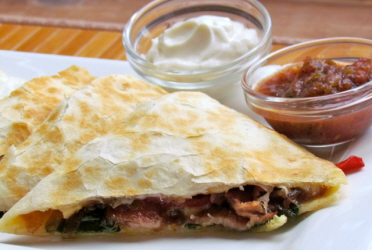 At a recent wine and cheese pairing event I tasted an Aged Dutch Gouda from Lancaster, Ontario with several wines and the best match was with Liberty School Cabernet Sauvignon from Paso Robles, California. The nutty, caramel flavours in the cheese wonderfully compliment the juicy, ripe fruit flavours in the wine. This easy quesadilla appetizer recipe was inspired by the match.

In a large skillet over medium heat, melt the 3 tbsp butter with 1 tbsp olive oil. Add the sliced onion, brown sugar and vinegar and sauté until the onion is golden brown, stirring frequently, about 20 to 25 minutes. Remove from heat and allow to cool.

Place the baking sheet in the oven to warm the quesadillas through and melt the cheese, about 5 minutes.

To serve, cut the quesadillas into 4 triangles. Arrange on a platter with sour cream and smoked chipotle salsa for dipping.

Recipe created by:  Christie Pollard for the Trialto Wine Group