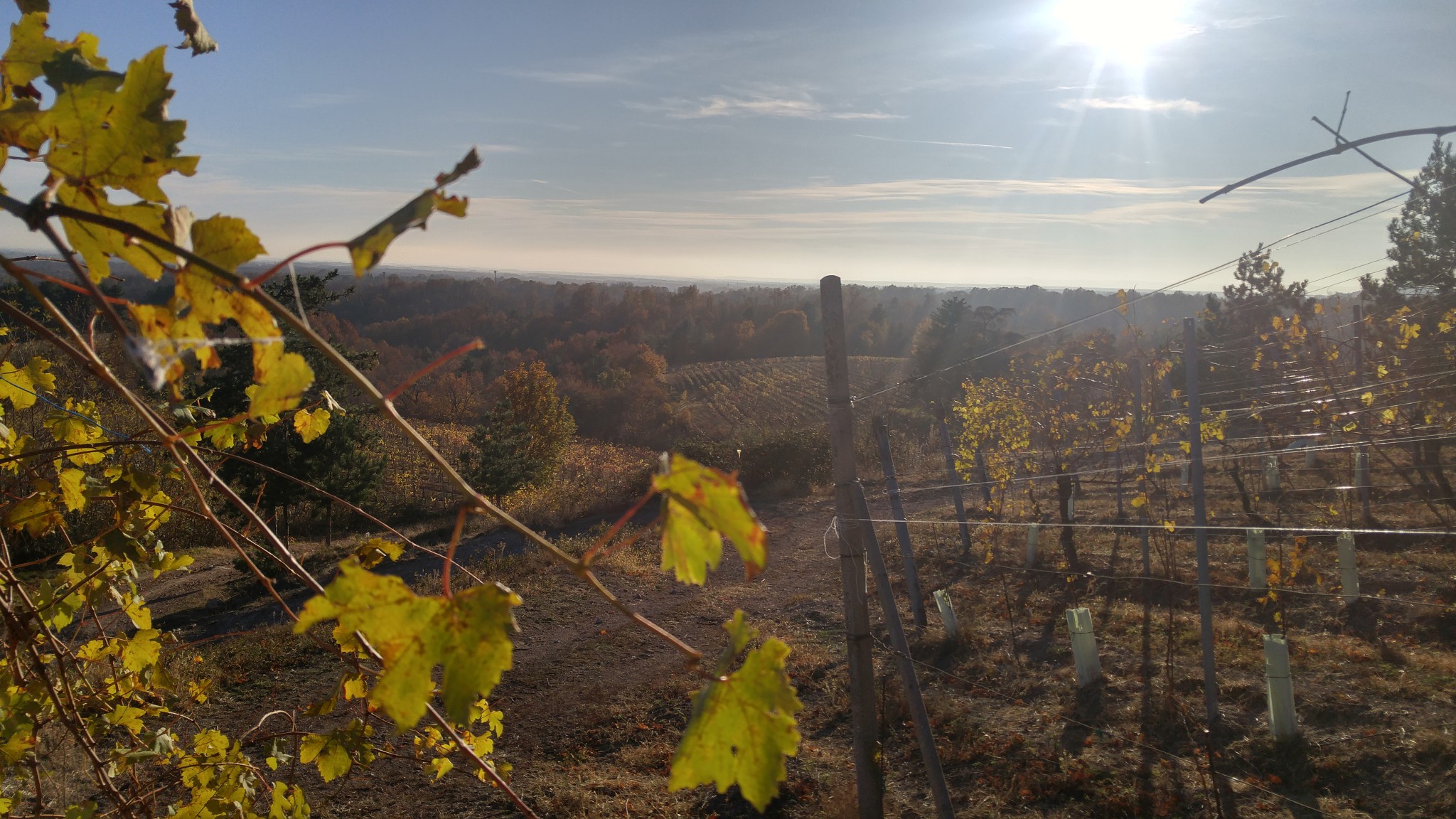 A lot more than popularity determines the prosperity of a wine region.

Circumstances change the reality of existence for producers all the time and as rational people, we do what is best for ourselves, our family, our community.
We can see this occurring with climate, as wildfires ravage California, and in general change, the lateness of growing conditions and harvest of many wine regions globally. 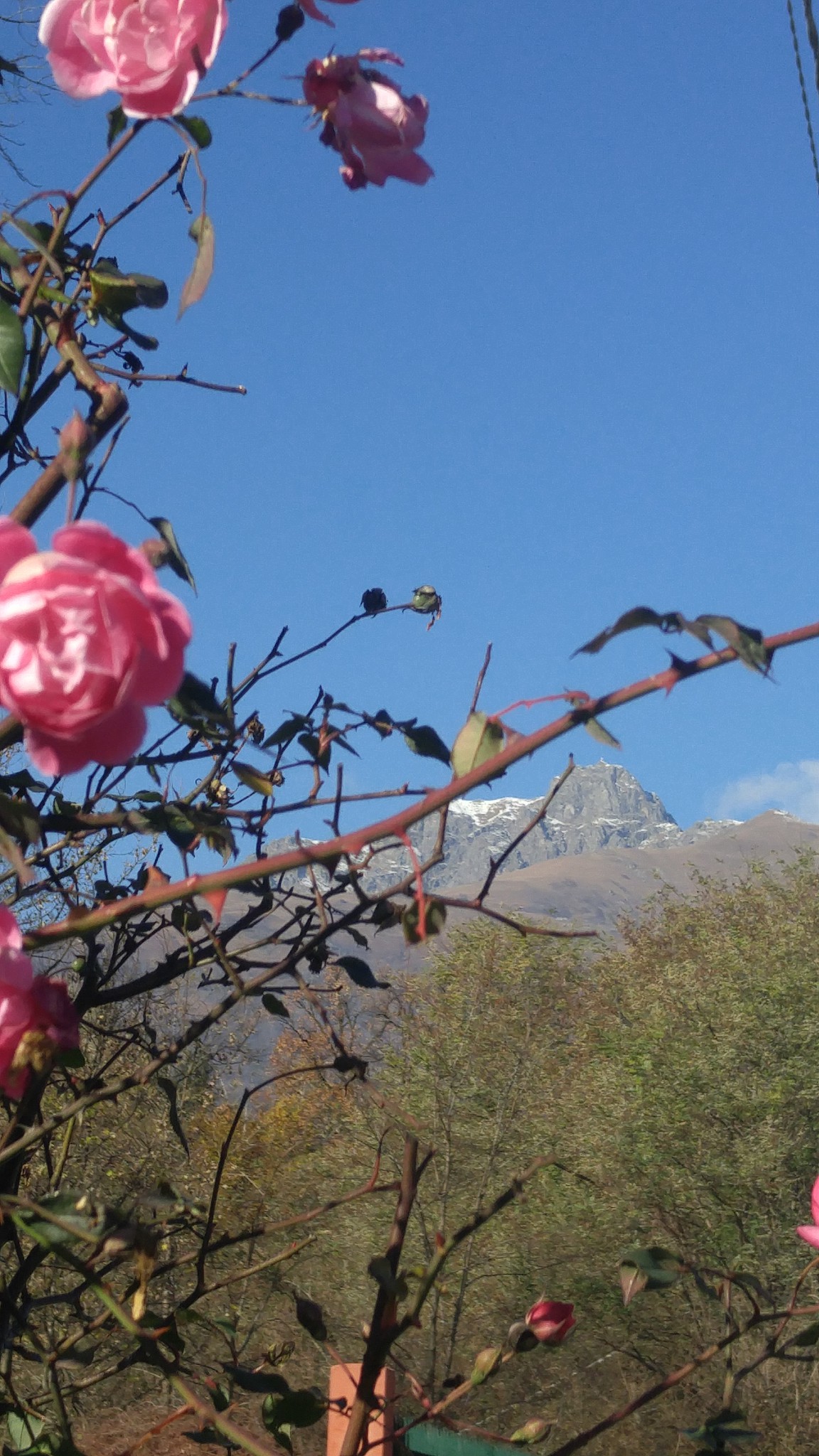 Throughout history this has happened many times before, though not always were the circumstances due to bad weather or climate.
At the foot of Mount Rosa and the Bo range of the Alps lies Biella and its ancient wines from the Biellese Hills.
It was the thriving centre of Piemontese winemaking hundreds of years ago, until the one-two punch of 20th century economic depression and the phylloxera pandemic closed the doors on many grand estates.
Though there are handful of producers who remained in business, only now are they really beginning a resurgence in production.
In mid-November of 2017, a select group of journalists and wine specialists were brought together by producers and corporate benefactors for a program dubbed ‘Taste the Northwest’ (Assagio a Nord Ovest).
The purpose of the trip is to get a glimpse of this region in context with others, globally.  The wines of the Coste della Sesia, Bramaterra, Lessona, and other climats of the Colli Biellese are limbering up for an aggressive educational campaign to show the world what distinguishes their wines.
For many, it will be an introduction.  Though these wines are available abroad in a limited capacity, their production is limited and almost entirely focused on premium tiers.
My suitcase has never been so light as when I left Biella.  I desperately tried to gather some samples when I was there to bring back to show others.  There were simply so little available.
Vineyards have been recultivated as well as modernized. And the locals, who never through the previous hardship lost their joie de vivre for food and drink, proudly produce some wines of magnificent structure and terroir.
The Biellese wines, like other regions in this corner of northwest Italy, focus a lot on the Nebbiolo grape (sometimes called ‘Spanna’ by locals), though you can find Erbaluce, Vespolina, Croatina, Bonarda (and Bonarda, Uva Rara (similar to Bonarda) and occasionally Freisa. 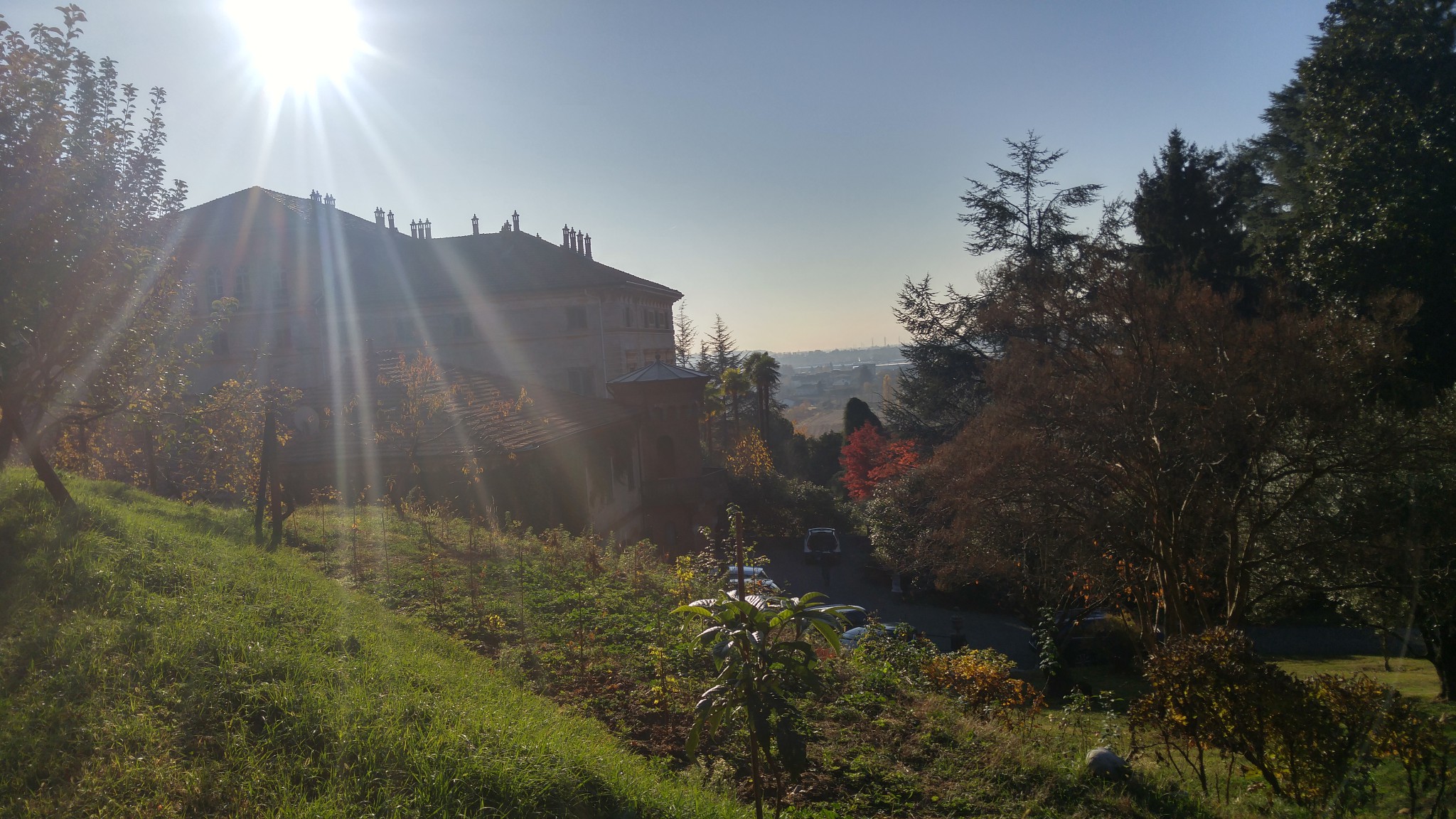 Though my arrival was late, I was still able to take part of the keystone event of the trip.  At an historic estate, along the Vigliano Biellese, was Villa Era.  A mansion from the nineteenth century surrounded by old vineyards recently renovated.
The villa is tucked into the hillside in a horseshoe of Spanna vines.  The estate was actually abandoned and left to seed, for a time during economic hardship.
It has more recently been restored and preserved for its historical importance as an example of the wine-making traditions of the area.
The producers of Biella had planned a tasting of some older vintages of Biellese wines going all the way back to the mid-nineteenth century.
All of this, they had organized, with an introduction by the families and Kerin O’Keefe (the Italian editor for Wine Enthusiast). 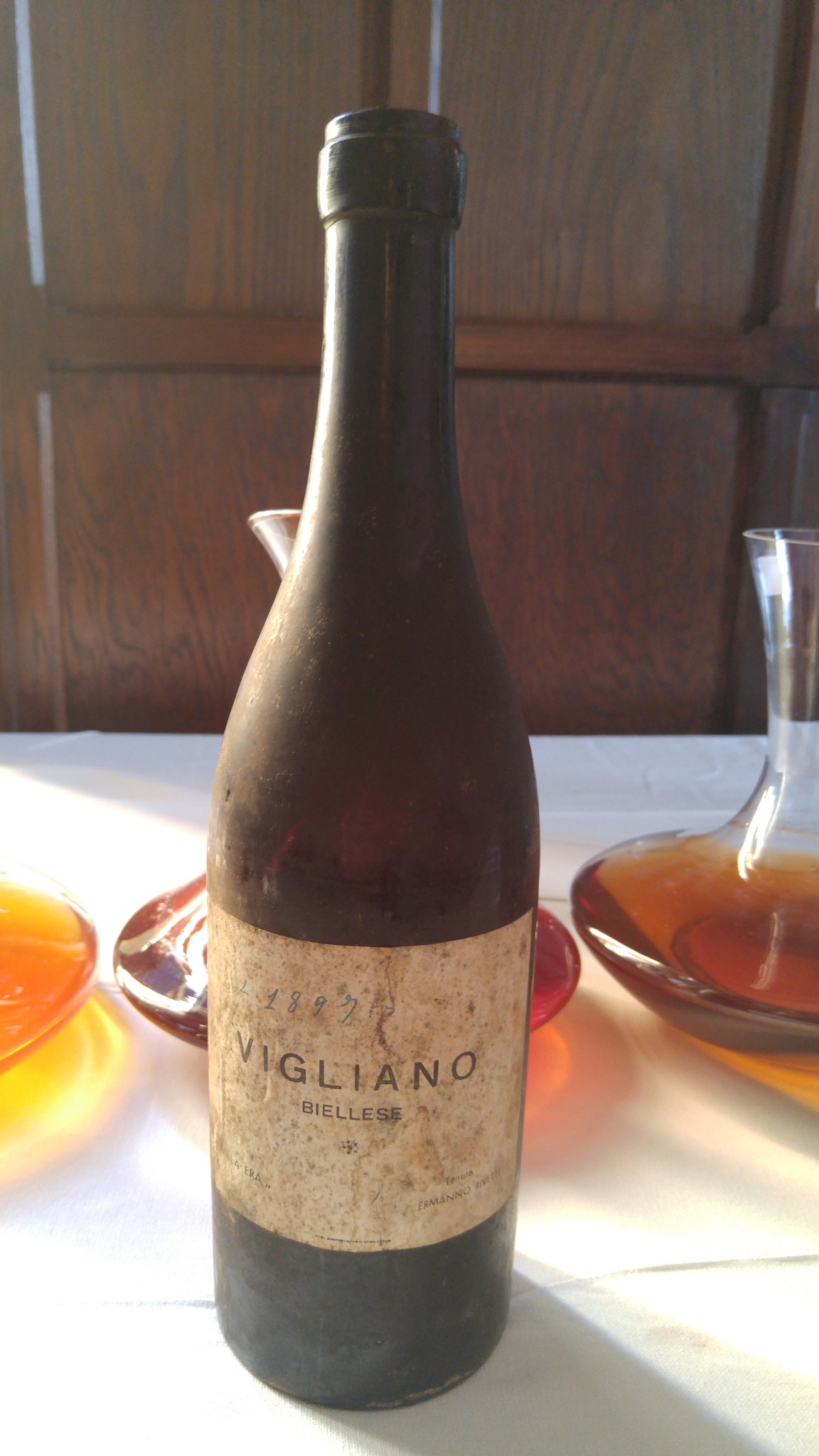 This tasting was the highlight of the entire trip.  It was astonishing!  That these wines still existed was good luck, since many producers left the viticultural industry.  What is more, it was amazing that the current owners agreed to relinquish one (in one case two bottles, because of heavy sediment).  These bottles are irreplaceable examples of not only the area’s history, but also their family’s. 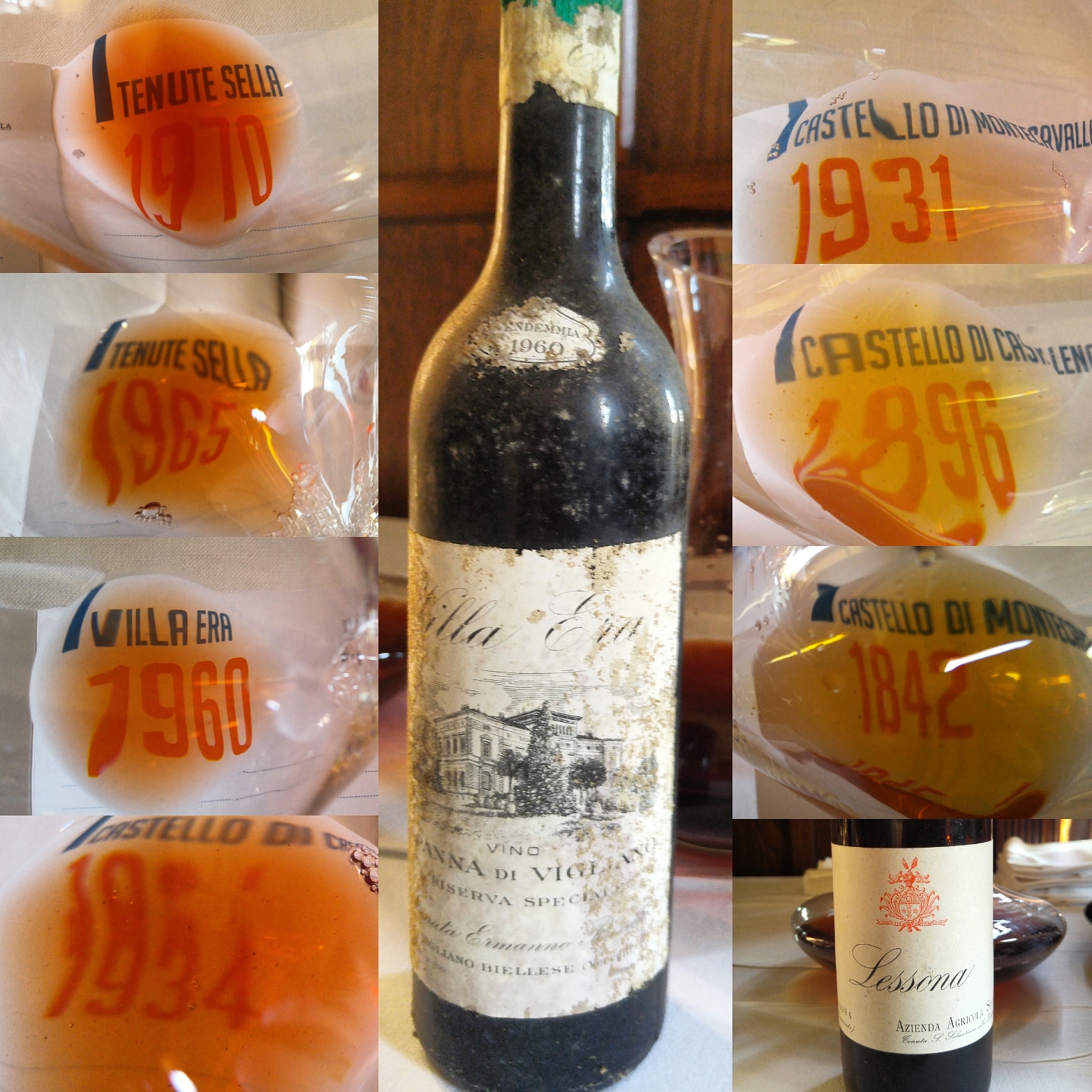 The contributions were from Castello di Montecavallo, Tenute Sella, and Castello di Castellengo, and Villa Era (see above photograph).
The wines were fantastically alive.  With old and rare wines, they must be appreciated without much comparative context.  The oldest examples came from a different period.  These Biellese wines were made differently than modern day.  Even climate change had a recognizable impact.
The older wines were radiant yellow.  They had shed a lot of their tannin, but had freshness somehow.  There was also a touch of sweetness, which is partly due to the wine styles of the time but also the technological limitations of winemaking back then.
They had less control over fermentation.  It would cease, as fall weather set in and was stabilized and bottled with a touch of sweetness.  This is something that can be seen in old examples from the Langhe, as well. 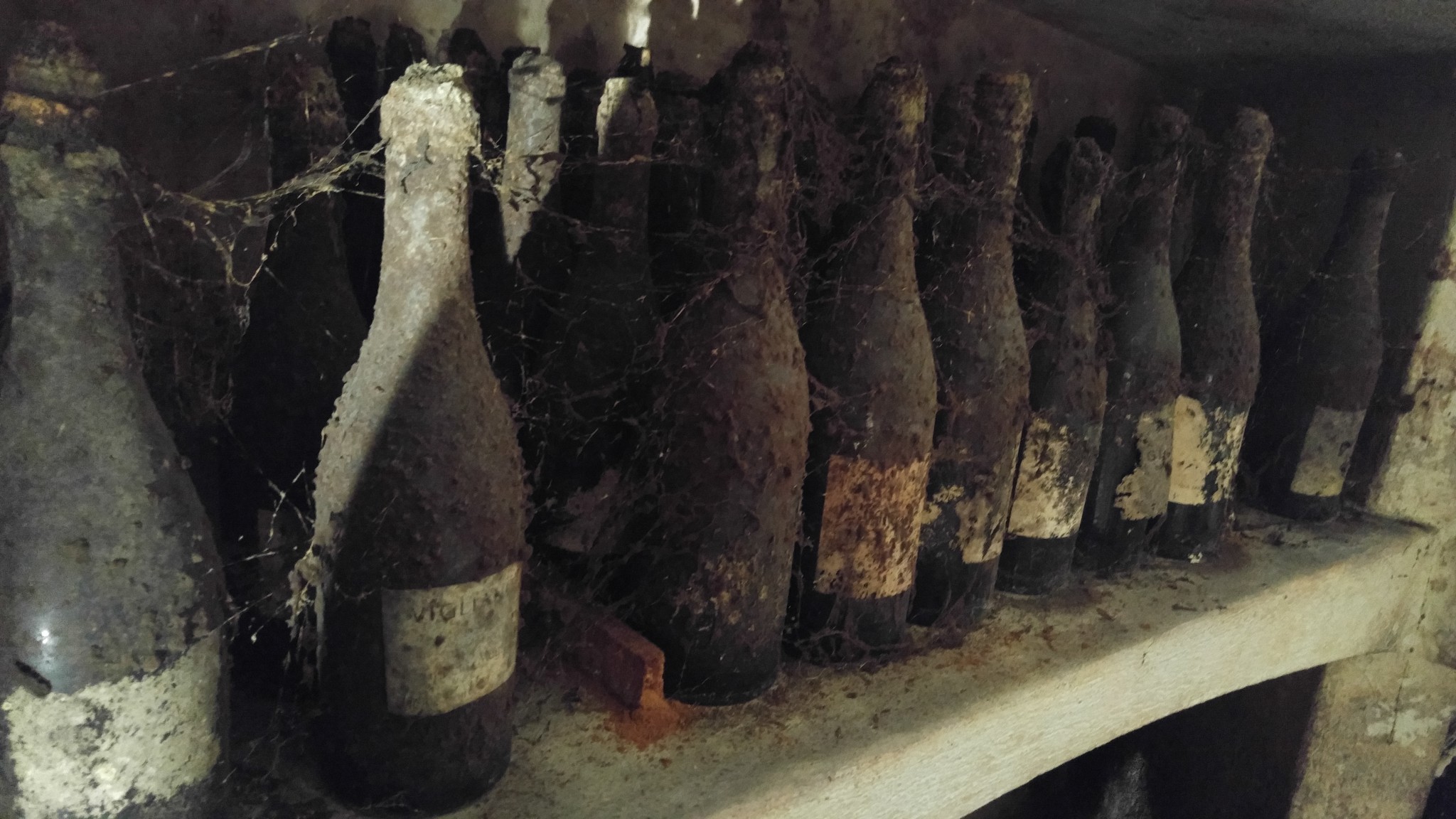 There was acidity and fruit.  The fruit were something like lemon juice and angel food cake, on the older examples.
Tenute Sella’s 1970 and Centovigne’s Castellengo 1934 were surviving effortlessly.  They were balanced and recognizable as Nebbiolo still. They had retained a portion of youthful vigour, but were mature and aromatic (full of pomegranate, cherry, leather, and rosehip).  The wines were so heavily perfumed still, you could smell them as they poured them a foot in front of you.
There was some debate about what grapes likely went into the wines, but according to the vignerons the available records point to the plantings being almost exclusively Spanna (Nebbiolo).  More recent rules have allowed for the incorporation of Vespolina (which add’s vitality and spice), Croatina (mild and fruity), and Uva Rara (small yielding and concentrated, it adds fruit and florality), and a few others into the wines of Biella, but most wines are dominated by at least 70% Spanna / Nebbiolo.
White wines were somewhat rare, though there were examples of Erbaluce (high acid and redolent of orchard fruit), which is versatile enough to be used in dry table wines, as well as sparkling and dessert wines (made through late harvest and desiccation).
Though Biella has as long a tradition as anywhere in Italy, there are still some interesting experimental wines.  On the final day of the trip I was fortunate enough to try 100% Riesling grown in the soil of Bramaterra, by Tenute Sella.
Wines grown here pick up terrific bold aromatics and loads of structure.  Though the vines are young, it produces a Riesling that would be decently long-lived.  The terroir of Biella is a mixture of the volcanic basalt that spills from the Alps and morainic soil deposits.  These Riesling vines pull their extroverted character from the mineral rich red/brown soil that was left behind when a nearby volcano destroyed itself in a massive explosion ages ago.

As previously mentioned, during the difficult time of The Great Depression many grape growers turned their backs on wine-making for other lines of work which began to flourish at this time.   Ermengildo Zegna began his textile empire, here in Biella. 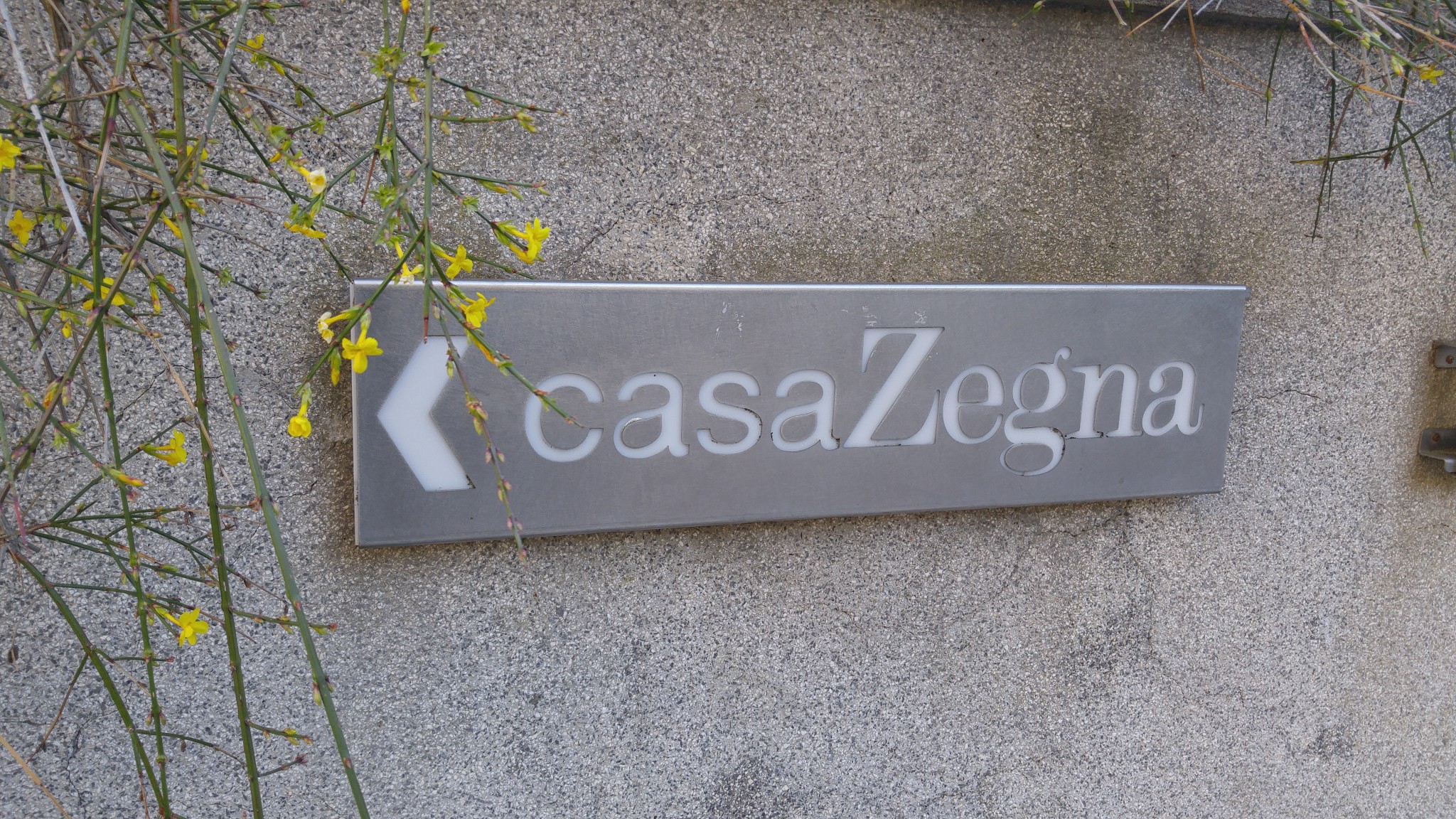 The estate is now a domicile and cultural museum for those who make the pilgrimage up the steep roads of Biellemont.

There are still some fabric and wool produced in the vicinity.  Historically, the Zegna family were benefactors that helped build infrastructure in Biellemont; building stores, apartments, and leasure facilities.  Currently, they have taken to philathropy, such as raising money for substance abuse rehabilitation. 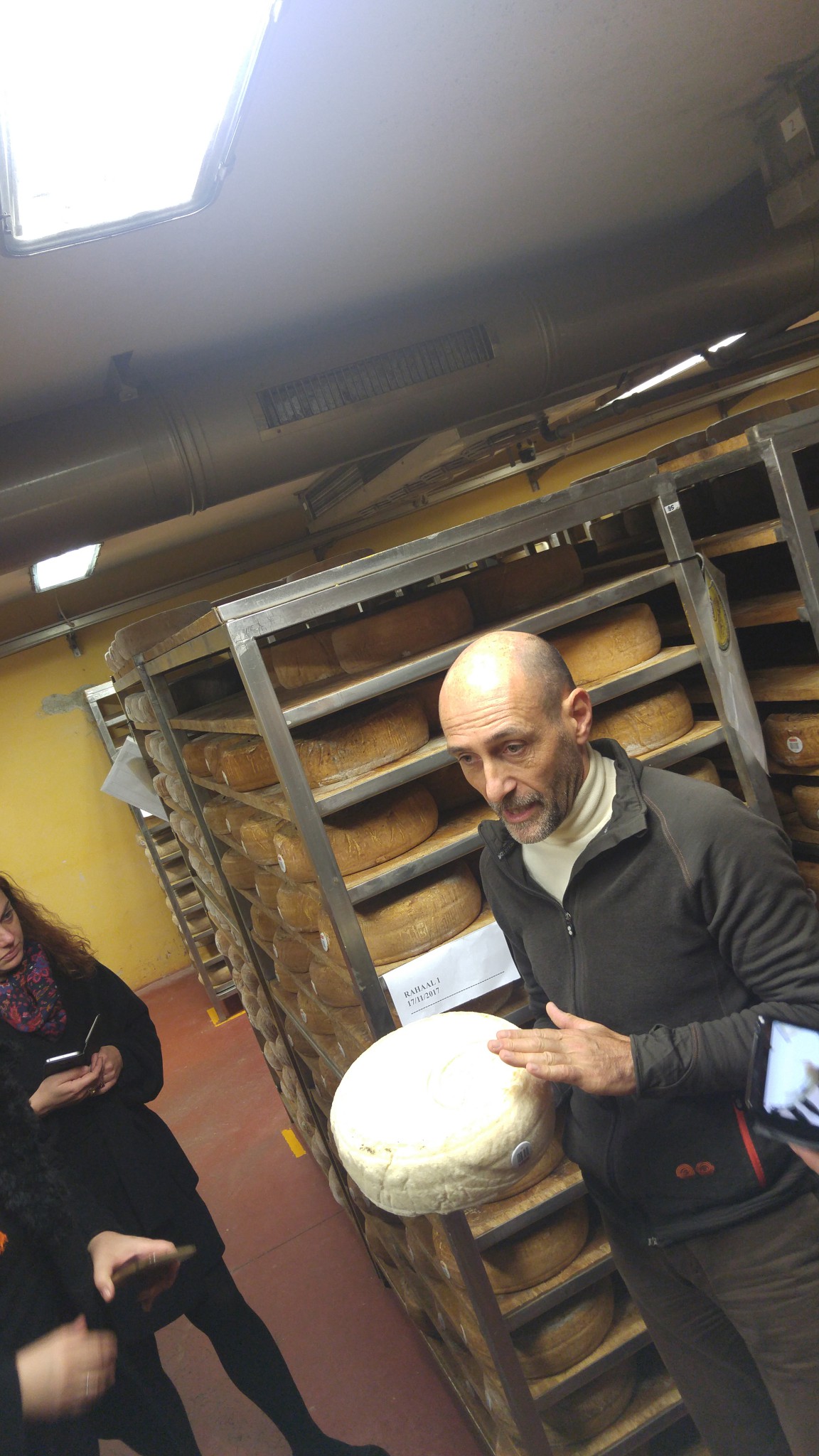 We managed to visit a cheese factory (caseificio) of Pier Luigi Rosso.  They have preserved the endangered cattle breed of the ‘Pezzata Rossa d’Oropa’ and are producing amazingly funky and delicious toma cheeses from the milk.

In some cases, they would incorporate grape must (grape skins, local beer, and other Biellese staples into the milk before adding the rennet.

What is so striking about the vineyards here, compared to the rest of the grape-growing world, is how the vineyards spring up spontaneously in the heart of some of the most scenic and historic places.

Like other regions, it has vineyards on the outskirts of the towns, but the beauty of vineyards lie in areas like Villa Era’s backyard amphitheater and Tenuta Sella’s ‘San Sebastiano allo Zoppo’ vineyard in Lessona D.O.C., which seem to spring out of nowhere amidst developments in the countryside. It’s a testament to the historic importance of where these vineyards are perched.

My personal gratitude to the Associazione Vignaioli Colli Biellesi for affording me a once-in-a-lifetime opportunity to understand and explore their region’s food, wine, and culture.

Biella’s history is one of determination, industry, longevity; all things exemplified in the wines they produce.  Hopefully, it manifests in a lucrative future for the Vignerons of Biella.  It affords privileged luxury and quality for wine enthusiasts now.