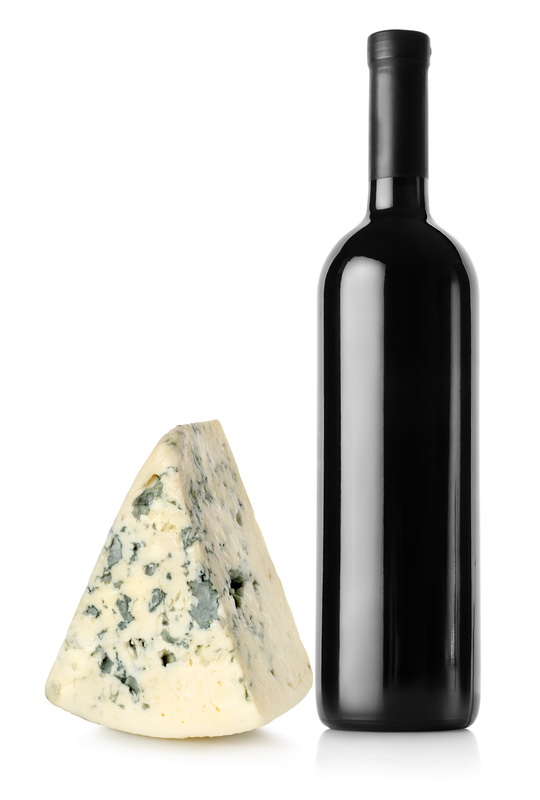 The most difficult cheeses to pair with wine are blue cheeses, as their strong taste and powerful saltiness tends to make red wine taste bitter and hot. Salt accentuates many aspects of food, including its flavor, and that’s usually a good thing.

However, it can also intensify both tannins and alcohol. The best foil for salt is sweet, so avoid dry and off-dry wines and go straight for the sweeter ones: late-harvest chenin blanc, gewürztraminer, and riesling all have the required richness and flavor.

Better still is the French dessert wine sauternes, made from grapes that are attacked by a good fungus called botrytis or “noble rot.” The resulting wine has a rich, honeyed character that pairs beautifully with the salty, tangy flavor of blue cheeses.

Sauternes and roquefort blue cheese are a traditional pairing, but even gorgonzola, made in the northern Italian Alps, pairs ideally with botrytized wines.

My favorite match for both hard and blue cheeses is port, a fortified wine whose alcohol is increased to 18 to 22 percent by adding neutral grape spirits (usually grape brandy) before fermentation is complete.

The yeast in the wine converts some of the brandy’s sugars to more alcohol, giving these wines their extra potency, and the remaining sugars sweeten the wine. In your mouth, the alcohol emulsifies the fat of the cheese, dispersing it over your palate for a pleasant, even, rich texture.

The unctuous mouth-feel of great port with its dark aromatic medley of toasted walnuts, prunes, orange peel, caramel, plums, and toffee, can easily hold its own alongside blue cheeses. The wine’s robust but rounded tannins give it the opulence to cope with concentrated butterfat.

One of the best blue cheeses is the British stilton, famous for its even distribution of blue mold. Historically, the companies that first shipped port out of Portugal and sold it to the world were all British—think Graham’s, Taylor & Fladgate, Dow’s—so the classic pairing of stilton and port is the happy result of maritime trade.

Cheese and wine that have the same aromas can often complement one another. One such pairing is between the floral, grapey notes in Alsatian gewürztraminer and the French cheese muenster, a soft, creamy, pungent cheese with a rusty-orange rind, first made by seventh-century monks from the milk of cows grazing on the Vosges Mountains.

In fact, wines and cheeses from the same region are often paired together: they express the same influences of climate and soil, leading to similar aromas and characters.

The Spanish wine sherry, fortified after fermentation is complete, has wonderful nutty aromas that are a perfect match for the Spanish cheese manchego. It’s made from sheep’s milk and has a moist but firm texture, with sweet and salty notes.

A medium dry amontillado or oloroso sherry goes well with this cheese as does sweet (cream) sherry. All three drink nicely too with aged gouda, which has a nutty character.

You’ll find my reviews of wines to pair with blue cheese here.