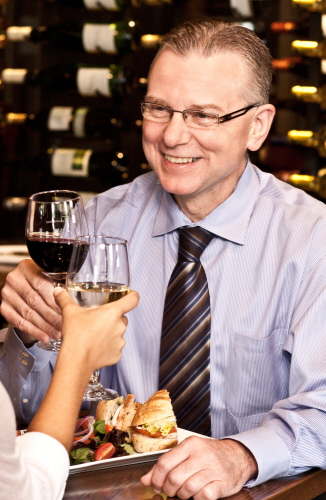 Avery Gavel, assistant manager and sommelier at The Five Fishermen restaurant in Halifax, shares his insights about pairing wine and seafood, creating historic meals with wine and his take on Nova Scotian wines.

What was your first wine experience?

I grew up on a dairy farm in Yarmouth, Nova Scotia, the oldest of five children. Wine wasn’t part of our family traditions, not even special celebrations. Communion in church was grape juice, even. My first wine experience was at The Five Fishermen in the early 1970s when I was 24 and on a double date. We ordered the cheap German white wine Liebfraumilch Crown of Crowns because we wanted to sound sophisticated saying the “Liebfraumilch.”

How did you get involved with wine professionally?

The training for my first serving job in 1975 at Dresden Arms Hotel in Halifax consisted of being shown where everything was. That was it. I felt inadequate, so I started reading books on wine and dining room service. Over the years, I graduated from the Canadian Association of Professional Sommeliers’ program and started travelling to the various wine-growing regions. Often, you never really wrap your head around the region and its wines until you’ve been there.

Aside from wine, my other passion is travelling: experiencing the customs, foods, currencies, scenery and navigating the language barriers is exciting. Wine now adds a new depth of intrigue to this.

Who have been your wine mentors?

The first was the late Alex Clavel, a world-class chef at The Clipper Cay on Upper Water Street in Halifax, during the 1980s. Almost daily, Mr. Clavel would offer me a taste and a few words about a specific wine. Today, I often turn to Nova Scotia winemakers to answer all sorts of questions—they always take the time to be helpful.

We have 217 selections, and of these, 41 are from Nova Scotia and 32 by the glass. Some of our rare wines include the 2004 Penfolds Grange, Australia; and the 2008 Sassicaia and Marchesi Antinori, Tignanello, both from Italy. Our most expensive wine is Spain’s Vega-Sicilia Unico at $450.

I’m very proud of our wines. The struggles of the pioneer days are behind us. Aside from the French settlers starting vineyards in Petite Rivière and Bear River Valley in early 1600s, we owe special thanks to the Dial family who started Domaine de Grand Pré in 1980 as well as the Jõst Family who opened their winery in 1983, followed by Blomidon and Sainte-Famille in 1990.

Generally, the white wines are fresh and aromatic with a crisp acidity—so distinctive that the industry has created a new appellation to recognize the style called Tidal Bay.  The red wines tend to be quite fruit-forward with a great balance of crisp acidity, tannins and lots of fruit flavours. On low yield vines, some reds can age and integrate beautifully, such as the 2003 Côtes de LaHave, Terres Richeux from Petite Riviére.

What are the more surprising trends for local wines?

We produce spectacular and affordable sparkling wines that use the traditional method for champagne. Benjamin Bridge, for example, has a range of bubblies that include the Brut Reserve, Late Disgorge Brut Reserve, Blanc de Noirs and Méthode Classique Rosé, the latter served by the Canadian High Commission at the London Olympics this year. The winery’s estate vineyards have the rare capability of attaining the same sugar levels and ripeness as those in Champagne, France.

Young, up-and-coming winemakers are choosing to work their craft right here in Nova Scotia when they could work anywhere in the world: Gina Haverstock, Simon Rafuse, Jean-Benoit Deslauriers, Jürg Stutz and Ben Swetnam come to mind.

How do you choose a wine when he’s having steak and she’s having a delicate fish?

I’d look for versatile wines from cooler climates, such as Burgundy, France, that crisp acidity, yet great flavours. I’d also play with the shape of the wine glass, giving the gentleman who’s having a steak a larger Bordeaux glass that will direct wine along centre and back of tongue, picking up slightly more harsh and bitter components. For the lady having the fish, I’d pour the same wine in a Burgundy glass to allow the wine to totally cover her tongue and pick up acidity for the seafood and bring out more discrete layers of elegance in the wine.

What do you do when a diner has selected a wine that’s really inappropriate for the meal?

I compliment the diner’s choice, as it’s not my place to pass judgment on someone else’s taste in wine, even if it is Amarone, a big Italian red wine, with lobster, which happens occasionally. Then I’d try to serve the wine cooler than normal; ice cold for a white and slightly chilled for a red so that the flavours won’t clash as much and I’d select a glass that would bring out the best in the wine for the meal.

What are your secrets for pairing wine and seafood?

In addition to cool-climate whites for crisp acidity, I like the discrete brininess in the Tidal Bay from Petite Rivière. Another complement is a slight spritz as in Vinho Verde or Benjamin Bridge’s Nova 7, a Moscato d’Asti-style wine that’s amazing with smoked salmon.

Oily fishes such as salmon, trout and arctic char aren’t difficult to pair with wine, but you have to avoid strong tannins as it gives a tinny-metallic taste to the wine and the fish. Unoaked wines are always safe. 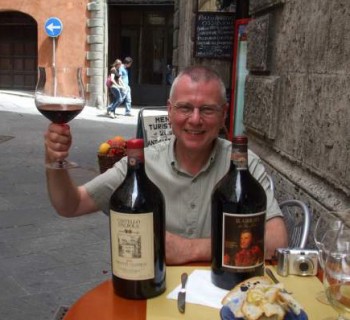 Tell me about your Titanic Menu.

The Titanic menu is a price-fix multi-course meal that changes monthly. The dishes are inspired by those that were served in the various dining rooms aboard the “unsinkable ship.” This April, the centenary of the Titanic sinking, our chef Jeffrey McInnis researched the dishes that were served for the final dinner in the first class dining room and tried to replicate them as closely as possible.

For wine pairings, I stay traditional and serve more recent vintages of several bottles that were actually in the Titanic wine cellar.  I might also break that tradition and pair the lamb dish with an Australian Cabernet Sauvignon that has subtle mint flavours and choose a Nova Scotia Icewine for dessert.

The 2008 Château Labouré-Roi, Mersault, a Burgundian chardonnay, would work nicely with all three second-course choices: Poached Salmon Mouseline, Lamb with Mint Sauce or Filet Mignon Lili. The wines are even more spectacular served in the Titanic pattern stemware from Nova Scotian Crystal.

What seasonal changes do you notice in the types of wines that diners order?

In autumn and spring, they prefer wines with a bit more weight and aromatics, such as Nova Scotia muscat and pinot grigio; riesling from Alsace; chardonnay and pinot noir from Burgundy; Spanish tempranillo and Italian sangiovese

For winter, it’s time to bring out the decanter and “sweater-weather reds”! These wines have a lot more weight and big, bold flavours, such as Nova Scotia baco noir, Australian shiraz and cabernet sauvignon, malbec from Argentina, Italian brunello or amarone.

The most memorable diners in your restaurant?

That was two years ago when three gents came in for lunch and ordered Dom Pérignon Champagne to start and then the super Tuscan Sassicaia. After they finished eating, they considered ordering a Sauternes, the dessert wine from Bordeaux, but remembered they were having Château d’Yquem at dinner that evening.

Do you see any differences between men and women when it comes to wine?

The only gender-specific wine comment that I can make is that women tend to have more analytical palates. If that lady also happens to be a foodie, she is well ahead of the pack. Chefs and others who love to cook also make the best tasters of wine.

Which wine do you sip on with a good book?

My books tend to be about wine, so I pair the wine with the theme of the chapter—but never read more than two chapters a night.

As well, the IWK Childrens’ Hospital published a new cookbook last year in which my fellow sommelier Anne Miller and I suggested different wine pairings and tips for each recipe.

What are your favourite wine movie moments?

I was pleasantly surprised that Tea With Mossolini took place under the towers of the San Gimignano winery in Tuscany.

The documentary Blood into Wine is entertaining, inspiring and informative. The “Caduceus” brand is created at Strong Hold Vineyards in Arizona by rock musician Maynard James Keenan and Eric Glomski (winemaker).

In the well-thumbed book Red, White and Drunk All Over, I first read the famous quote from The Seven Years Itch in which Marilyn Munroe declares: ”Everything’s fine. A married man, air conditioning, champagne and potato chips. This is a wonderful party.” I’ve done the pairing in a few seminars since.

What special bottle is in your personal cellar?

I bought six bottles of the 2004 Tili L’Estrusco, Chardonnay, Assissi, Umbria Bianco IGT after a marathon grande tasting in Umbria in 2008. I kept this chardonnay on the table through the entire tasting; it held its own beautifully against all the big reds. This is a white wine for red drinkers, quite weighty, with notes of apple, apricot and it has medium acidity. Five bottles have disappeared at special dinners and as gifts. I’m waiting for the perfect occasion to open my last bottle.

A wine served on the Titanic, but from a previous vintage.

Pour the fig and rosemary syrup into the rest of the ingredients in an ice-chilled martini glass.  Then mix. Garnish with lime wheel and kirsch (sour) cherry.

You may also enjoy these chats:

Pairing Wine and Dessert with a Sommelier and Wine Importer

Master Sommelier Video: What it Takes to be a Restaurant Wine Expert 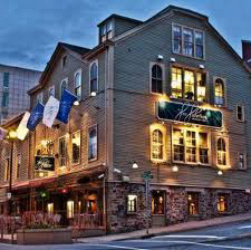