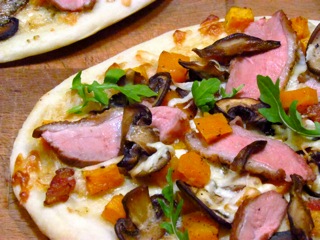 A  swanky pizza with smoky, sweet and savoury flavours. Choose a wine with the same bold flavours such as Kaesler Stonehorse Shiraz Grenache Mourvedre 2008. The wine’s bright, concentrated fruit and hint of spice works well with this recipe.

Leftover smoked duck or BBQ duck would be a great substitute.

Roast the garlic. With a sharp knife, cut off the top of the head of garlic to expose the individual cloves within. Place the garlic on a piece of aluminum foil, drizzle with 2 tsp olive oil and then wrap the foil tightly around. Bake for 45 to 50 minutes or until the cloves are golden brown and soft.  Once the garlic has cooled enough to handle, remove the roasted cloves from their papery skins and place in a small bowl with 3 tbsp olive oil. Mash with a fork or the back of a spoon until you have a smooth paste. Season with salt and pepper to taste.

Roast the squash. Meanwhile, toss the diced butternut squash with 2 tsp olive oil, season with salt and pepper and spread in an even layer on a parchment paper lined baking sheet. Roast the squash until tender and becoming golden, about 20 minutes. Set aside.

Prepare the toppings. In a medium skillet saute the bacon until it becomes crisp. With a slotted spoon, remove to a paper towel to drain. Pour off all but 1 tbsp of the bacon drippings, add 2 tsp olive oil and then the sliced mushrooms and saute until the mushrooms release their moisture and become browned, about 10 minutes. Season with salt and pepper to taste. Remove to a small bowl.

Roast the duck. Pat the duck breast dry with a paper towel and then season with salt and pepper. In the same skillet you sauteed the mushrooms, sear the duck breast, skin side down over medium high heat until crisp, about 5 minutes. Transfer the duck, skin side up, to a lined baking sheet and bake another 8 to 10 minutes until just cooked through. Allow the duck to rest 10 minutes before thinly slicing.

Divide the dough into 4 pieces and roll each into a 6 inch circle.
Place the pizzas on two parchment lined baking sheets.
Divide the roasted garlic sauce among the pizzas, spreading into a thin layer using the back of a spoon.
Divide the grated smoked mozzarella evenly over the pizzas and then scatter evenly  between the pizzas the roasted butternut squash, crispy bacon bits and sauteed mushrooms. Finish with a sprinkling of Romano cheese and crumbled Gorgonzola, if using.

Place pizzas in the preheated oven, and reduce the temperature to 400 F.
Bake pizzas 12 minutes or until starting to become bubbly and browned.
Remove from oven and evenly distribute the sliced duck over the pizzas. Return to oven for another 2 to 3 minutes or until the duck is just warmed.
Garnish each pizza with a small handful of arugula as they come out of the oven.

Stir together the yeast, 1 tbsp flour and ¼ cup warm water, let stand until it appears creamy, about 5 minutes.
In a large bowl stir together 1 ¼  cup flour and the salt. Add the yeast mixture, olive oil and remaining ½  cup warm water. Stir until smooth. Stir in the remaining ½  cup flour so dough comes away from the sides of the bowl.  Transfer to a lightly floured surface and knead with hands until it becomes smooth and elastic, about 8 minutes. Form into a ball and place back in the bowl. Loosely cover with plastic wrap and allow to rise in a warm, draft free place until doubled in size, about 1 ½ hour. Punch down the dough and divide into 4 balls. Using a floured rolling pin, roll each ball into a 6 inch pizza crust.

Recipe created by: Christie Pollard for the Trialto Wine Group