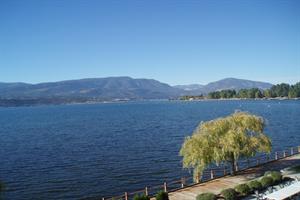 Hillsides blazed with red fall color as we drove from Seattle through the Okanagan Valley of Eastern Washington and into British Columbia.   After enjoying the six hour drive through magnificent scenery in the Cascades and along the Columbia River, we arrived at the Sandman Hotel in Kelowna.

We quickly settled into our large suite, whose very comfortable chairs and outside patio with a view of the hillside were just what we needed. After relaxing, which was very easy, we went downstairs to the Chop Steakhouse & Bar.  We had thought that there would just be meat on the menu, but we were pleasantly surprised to find an excellent selection of seafood so we started off with the Ahi Tuna Pillars with a thin layer of mango salsa.  However, my wife, Elizabeth, and I had been thinking of meat for a week, so for the main course I chose the New York Peppercorn Steak and Elizabeth selected the Aged Canadian Prime Rib.  The Peppercorn Steak was the best steak I have ever had; the brandy sauce was a perfect balance for me. Elizabeth begged for a taste and I tried to ignore her but it didn’t work.  So I gave her a bit of the steak in exchange for the Prime Rib which melted in my mouth.  Our dinners were paired with an excellent Okanagan Cabernet Franc. We will cover the great wines of the region in our other articles.

The hostess sat down with us and shared a brief history of the Chop Steakhouse & Bar. She also insisted on some fine deserts of Caribbean Rum Cake and Vanilla Bean Gelato that we had no problem finishing.  It was interesting to learn that the restaurant and Sandman Hotel are owned by the Gaglardi family, the dad Bob who is now mostly retired and his son Tom who is active with the company. Tom worked his way up with the company ladder first as bus boy at the age of fourteen, later as a carpenter, and continues to blaze new trails for himself and the firm.  Tom is part owner along with four national hockey league players of the Kamloops Blazers.  Time did not permit a trip up to Kamloops to see the Blazers play, and the Kelowna Rockets were out of town that day so we figured we would devote the next day to the wine trail and going across town to stay at Manteo Resort.

After an all day tour of wineries in the eastern part of Kelowna it was time to fortify ourselves at the Cabana Bar and Grille, located on Lakeshore Road.  One of the principals, Jay Blackford, joined me for some appetizers and a local Riesling. I told Jay that I wanted an all seafood dining experience and I was frankly blown away by all the specially prepared items.  I started with the grilled calamari which is Humboldt Squid spiced with fennel, a tomato relish, and what really sets it off, jalapeño.   Continuing with seafood Jay suggested the seasonally fresh halibut. That was another excellent choice, served with a citrus sauce, fruit relish, and Okanagan herbs. Jay said one of his customers only comes in when this halibut is served, and I can now see why.

When I asked Jay how he ended up in Okanagan, he told me his wife had found a house there and told him he was moving from Calgary to Kelowna. Well, it was not quite that simple. Jay has been in the restaurant industry for over 15 years and met one of his current partners, Ned Bell, at a competing restaurant in Calgary. Ned is the chef at the Cabana and is very popular all over Canada as he is the host on Food Network Canada.  Ned returned to his roots in the Okanagan and Jay followed him there, and as they say, the rest is history. Ned, Jay, and Michael Borg are partners in this deservedly successful restaurant.

Sadly, my wife Elizabeth had a bad cold and was not able to enjoy the ambiance of the Cabana. However, Jay had the tonic for her, Pacific Chowder (a mix of seafood with potatoes, corn and tomatoes). I took an order to go and I must say this soup seemed to have healing powers as Elizabeth did perk up.  The expansive views of Okanagan Lake and the rolling hills around it from the Manteo Resort also helped her recover.  The next day we sampled some of awarding-winning Chief Bernard Casavant’s gourmet food at the Wild Apple Restaurant, located at Manteo Resort.  The restaurant’s great location and design allows one to eat inside while enjoying views of Okanagan Lake, or eat outside on a sunny deck overlooking the Lake.

After all this dining I needed to get some exercise so I walked across the street to the Cabana Bar and Grille for another dose of the healing powers of their Seafood Chowder for my wife. While I waited I had the grilled calamari again with local Chardonnay and watched a hockey game. It was not the Kamloops Blazers, but the Toronto Maple Leafs. I’m not sure what I love most about our Canadian trips: wine, food, or watching hockey. One thing I do know for sure—we’ll be back soon.

Guest Contributor Michael Fagin is a freelance travel writer who has traveled over the last ten years across Canada and visited all the major Canadian wine regions. While he is not writing Mr. Fagin is a meteorologist for West Coast Weather, LLC forecasting weather for the West Coast of the US as well as on an international basis.