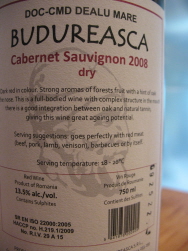 It’s not nomenclature for exotic breeds of horses, nor is it an exotic card game, Dealu Mare is a winemaking region in Romania known for producing red wines.

When thinking of Romania, rows of grape vines might not be the first thing that comes to mind – Transylvania and Count Dracula maybe, Communist rule, or the Romani people perhaps – but Romania happens to be the world’s ninth largest wine producer. With a winemaking tradition that dates back some four thousand years, Romanians were drinking wine when most of Europe was not. This might have something to do with the country’s proximity to Greece, or it might be due to the fact that it was a long-time Roman-occupied territory, or maybe it’s simply that Vitis Vinifera have always grown wild alongside the Carpathian Mountains.

With a cool, continental climate, not unlike our own Canadian climate, Romania produces mostly whites, but in a few southern pockets, close to the moderating effects of the Black Sea, temperatures heat up enough to allow for good ripening of red wine grapes. In Dealu Mare, where south facing hillsides catch the summer sun, grapes like Merlot, Feteasca (one of many grapes indigenous to Romania), and Cabernet Sauvignon flourish.

Cabernet Sauvignon is one of the world’s most ubiquitous grapes and as a result there are an abundance of styles of wine made with it. This bottle is ripe and fruity and full. Plum and vanilla bounce around in the glass with notes of eucalyptus and cocoa. A little tobacco rides out the smooth tannins and a final acidic lift finishes everything off nicely. It was very good with an ash rind, soft cheese and some fig jam. 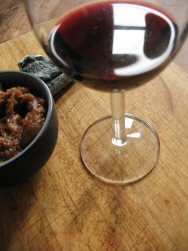 I wonder if, on his days off, Count Dracula kicked up his feet, threw flame to the fireplace and indulged in a little red wine from Dealu Mare?