Ottawa’s internationally-celebrated wine writer Natalie MacLean is looking forward to the Christmas season and some special gatherings. “I am already anticipating my favourite part of holiday entertaining, which is uncorking great bottles. I literally run my fingers over them thinking about which to serve, just as some folks love to go into bookstores and touch the books,” says Natalie. 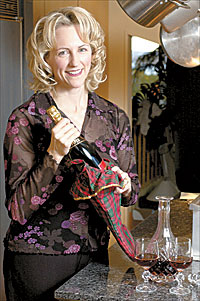 Unlike most of Ottawa’s self-proclaimed wine aficionados, Natalie actually holds down day jobs as a wine writer, speaker and judge. A graduate of Algonquin College’s sommelier accreditation program, she is a member of the National Capital Sommelier Guild, the Wine Writers Circle and several international wine societies. She notes wryly that, “my unswerving goal in life is to intimidate those crusty wine stewards at fine restaurants with my staggering knowledge.”

With credentials such as being named the World’s Best Drink Writer at the 2003 World Food Media Awards in Australia as well as winning the 2003 and 2004 James Beard Foundation Journalism Awards, Natalie certainly knows her stuff when it comes to wine. In addition to writing for numerous food and wine publications, she offers a free, award-winning weekly wine newsletter featuring wine picks, articles and humour.

Natalie confesses that neither herself nor her husband Andrew are particularly fond of cooking, so one of their favourite holiday entertaining strategies is to meet friends at a restaurant that has a relaxed atmosphere and great food. “Beckta and Juniper are two of our favourites. We do, however, love to host dinner parties at home, with about eight people. We find a group this size is ideal for conversation. While we usually have the meal catered, the part we enjoy the most about entertaining at home is that that we can crack open our best bottles of wine,” says Natalie.

In planning a meal for a special dinner during the holidays, Natalie explains that their strategy is based on the fact that “we love anything that goes with wine and won't overwhelm it. I know this is like buying shoes or earrings first and then the outfit, but for us, wine is a way to start building a meal. We enjoy great dishes that are savoury without being too hot or spicy, such as game meats along with seasonal produce.”

When asked about her childhood holiday food memories, Natalie replies with a smile, “eating too much candy!” A native of Nova Scotia, her holidays were spent in Cape Breton among family. “I remember things as being very homey with delicious, traditional meals prepared by my grandmother. One thing that stands out in particular in my mind is her amazing biscuits. They were like clouds, and then we melted butter on them,” she reminisces. A special holiday dessert memory she cherishes is that of homemade fudge. “Looking back through the eyes of six year old, I can envision licking the bowl, the spoon, the drips on the counter, and finally getting to have a piece of the fudge as soon as it had set.”

The children in all of us can perhaps empathize with Natalie’s less pleasant holiday dining recollection, that of being served “green veggies of any sort – leafy ones, long ones, balled up ones – just about any kind; I hated them all.” She’s quick to point out that her taste buds have matured in the intervening years.

Not surprisingly, Natalie’s suggestion for an ideal hostess gift over the holidays is “a great bottle of wine. People should never be intimidated about giving wine, even to a wine connoisseur, since it's really the thought that counts.”

Natalie’s own Christmas meal will feature turkey and trimmings, but not prepared by her. “I’m very fortunate that I can put my husband in charge of cooking the turkey – it’s a very symbiotic relationship. “I don’t do turkey, I do wines for turkey,” she explains.

Who among us wouldn’t welcome some advice from Natalie when we venture out to select the perfect bottle to accompany our own holiday feasts?

By Frank Macdonald
The Oran September 2003

This past August, wine and spirits writer, Natalie MacLean visited the Glenora Distillery researching an article on North America's only single malt distillery.  For the writer whose travels have taken her around the planet in pursuit of the world's finest wines, this was a trip back home for the daughter of John MacLean of Mabou and Ann Estelle (MacDonald) MacLean of Baddeck, who is the only Canadian nominated for the World's Best Drink Writer Award in 2003.  She is currently in Australia where the recipient of the award will be announced later this month.

"Like all good Cape Bretoners I was born in Toronto where my mother and father had to go to meet each first before returning to Nova Scotia. We returned to Whycocomagh and lived there a year," Natalie explains.  Following her parents separation, Natalie and her mother, a teacher, lived in Antigonish and Sheet Harbour before finally settling in Lower Sackville. 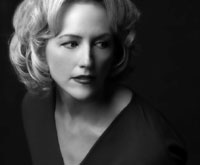 Spending her summers at her grandparents' home in Baddeck, Natalie MacLean took advantage of the Gaelic College to learn how to dance and pick up a smattering of Gaelic, and pick strawberries.  "I excelled at strawberry picking," she adds.

"Eventually I became quite serious about the dancing as there were no strawberry-picking competitions. When I was 13 to 17, we went to Scotland each year to compete in the world championships, my best showing was when I was 17 and placed fifth after three men from Scotland and one woman from the US. I also started to teach dancing in my basement when I was 15.  I photocopied handmade notices and took them to the principals of the elementary schools in Lower Sackville and asked to pass them out in the classes.  Before I left to work on my MBA at Western University, I had 300 students and five teachers working for me, and was able to put myself through university without debt."

So how does someone who excels in the Celtic art of dancing eventually find her way into the pages of international magazines featuring food and drink?  One could say it's no great leap at all, claiming that wine and spirits is just another Celtic art.  But what brought Natalie MacLean to the attention of the international wine industry was a series of fortunate opportunities.

"I never developed a taste for beer or hard spirits, and developed a strong distaste for the gawd-awful glass of wine I was offered at Christmas and Easter each year. But then I started drinking wine when I met my husband Andrew (and have not found a reason to stop since). We lived in Toronto after graduating from the MBA program and went out to eat almost every night since neither of us could cook. Andrew liked wine with a meal and so I started too," Natalie explains.

What began as night course in Spanish for Natalie and her husband, Andrew, soon became too much work to be fun, so the couple switched to an entry-level sommelier program at George Brown College. They went with their instructor on a wine tour of northern Italy and became hooked.

In 1996, the couple moved to Ottawa where Andrew works in the high tech industry, and Natalie went on with her wine studies, completing all four levels for a sommelier certificate at Algonquin College.

"But not with writing in mind. Andrew and I continued to go on wine tours for vacations, the only type where you don't end up fighting," she says.

"Then we had our son almost five years ago, and in a haze of postpartum sleep deprivation, I wondered around Loblaw's grocery store and picked up the now-defunct President's Choice magazine. They had beautiful food photography, but I wondered why there was no wine column.

It turns out later, they did run a regular column, but that issue just happened not to have one. I called the editor and asked if she'd be interested in an article and she said yes, and asked had I published elsewhere, so I said yes thinking of my high school newspaper and we went from there." 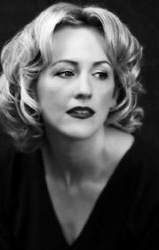 Getting a regular column in the President's Choice magazine gave Natalie the confidence to approach other publications.  The response was positive enough for her to consider a career change.

"I decided not to return to my high tech job after my maternity leave was over and eventually I worked my way into several publications."

Then friends began requesting copies of Natalie MacLean's articles which led to the idea of developing her own website where her scribblings could be accessed by interested readers.  "I started my newsletter with about 200 wine nuts here in Ottawa and in other cities."

There are now thousands of wine lovers in 36 countries who read Natalie's weekly e-newsletter which is free. "I send the newsletter because I love the feedback and often get story ideas this way."

In May of this year, her newsletter, Nat Decants, was named one of the three best food and wine newsletters in North America at the James Beard Foundation Journalism Awards in New York, considered the Oscars of food and wine writing.

Word of the newsletter and the website, a one-stop location for articles, information, books, and monthly wine suggestions, spread, bringing people from around the world and a variety of backgrounds into that forum for wine tasting and appreciation.

"For instance, I'll get a group of folks from an Australian wine tasting club all subscribing in succession.  One gentleman, who is blind but wants to become a sommelier in the U.S., says mine is the only wine publication he can read because his specially-equipped computer reads it aloud to him. I get such a wide and varied background of people subscribing: the storm water reservoir manager in Tulsa, somebody from the IRS, customs inspectors, the emergency night nurse in Saskatoon, and on and on. Sadly, one young woman with whom I had e-mailed back and forth died this spring and her mother e-mailed me to tell me and thank me because her daughter so loved wine. It hit me as both sad and strange how people become connected without having met."

While Nat Decants brings together a world of wine lovers, the large number of subscribers to the newsletter as well as visitors to the website creates an ideal forum for promoting more than just wine. 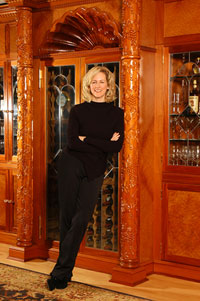 Natalie MacLean's website also promotes a list of monthly charitable activities within the wine world where people can enjoy the fruit of the vine as well as helping humanitarian causes.  And her charitable intentions reach far into the future.  "I provide the humanitarian service of making wine lovers around the world happier, and eventually, I will be donating my liver to science," she adds.

"In terms of the effect of my newsletter, all I can say is that I repeatedly throw myself on the flames of self sacrifice each time I recommend wines because my favourites sell out quickly at my own local store."

On one occasion, Natalie MacLean's newsletter recommended a fairly pricey wine, Mission Hill Oculus at $35 a bottle, available only from an agent and with a minimum order of one case at $420.  The agent sold 10 cases the morning her newsletter went out.