In this video, we chat with two Gold Medal winners in The Great Canadian Wine Match: winemaker Norm Hardie and wine lover Joe Hache, who rallied thousands of votes for Norm’s pinot noir to be named Canada’s Best Wine with Pizza.

They join me from Norm’s winery in Prince Edward County, Ontario.

Note: there’s a slight delay of a few seconds with their responses because they’re recording from Norm’s cellar.

– Both men talk about why pinot noir can pair beautifully with pizza, which types, and why the simplest foods can be the best matches with complex wines

We’ll post part two of our conversation in the next day or two. 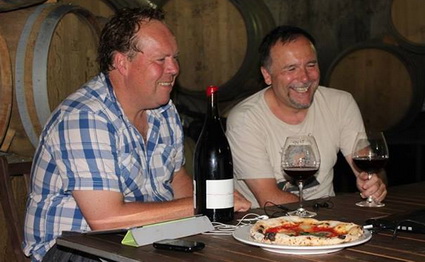 Norm and Joe recording our video chat in Norm’s cellar … tough work, but they’re up for it. Photo courtesy of Joe Hache. 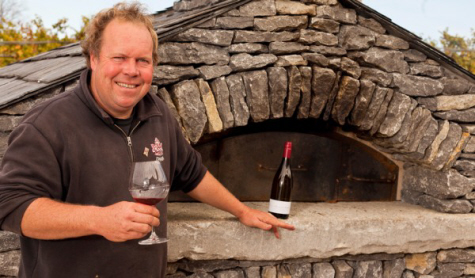 Norm Hardie beside his wood-burning open-air pizza oven on the winery grounds.

Natalie: Today, we’re joined by two gold medal winners in the Great Canadian Wine Match, winemaker Norm Hardie, and wine lover Joe Hache, who rallied thousands of votes for Norm’s Pinot Noir to be named Canada’s Best Wine with Pizza. They join me from Norm’s winery in Prince Edward County, Ontario. Welcome to you both.

Norm: Great to be here Natalie, thanks for having us.

Natalie: Alright, great. Let’s start with you, Joe. Tell me about the first time that you tasted Norm’s Pinot Noir, where were you? What did it taste like?

Joe: Well, we moved to the county just for the wines and one of the first wineries we came to was Norm Hardie Winery and he introduced me to this Pinot Noir. I fell in love with it. It’s just incredible and later on we tried it with pizza and it blew my mind.

Natalie: And how did it strike you, taste-wise? Medium, full body? How would you describe it to someone who’s never tasted Norm’s Pinot Noir?

Joe: Well, I’m a white wine drinker and I don’t drink a lot of red wine. But I came in here and this big gregarious guy said “Joe, you got to try my red wine, my Pinot Noir.” And I don’t like a heavy red wine and this one, it’s just pure heaven. I love Pinot Noir now and Norm’s introduced me to Pinot Noir.

Norm: We got one more coming next.

Natalie: That’s great. And I’ll just throw in my two cents because I’ve tasted Norm’s entire lineup, including his wonderful Chardonnays and Pinot Gris, but I especially love the Pinot Noir because I find they’re just like liquid satin, fresh cherries, yet really in balance and great with food. So before we go to Norm, Joe, tell me why you think Norm’s Pinot Noir pairs so well with pizza.

Joe: I love pizza and I love wine, and these two just go right together and it’s actually kind of interesting because he grows vegetables for his pizzas, right beside his grapes. So I don’t know if that has anything to do with it but it just matches it. It’s incredible.

Natalie: That’s a really good point. Norm, tell us a bit about this Pinot Noir first, then we’ll talk about pairing it with a pizza. But what is different from your county unfiltered Pinot Noir from, say, your other Pinot Noirs? Give us a sense about what makes this wine different.

Norm: Well I primarily make two Pinots, one from Niagara, one from the county and once in a while we do my (inaudible) here. The big difference between the county and Niagara is the sites in Niagara have less limes and more clay, so they tend to be really big and full bodied and rich, whereas the county is about the purity and acidity. We have this wonderful limestone soil and soils, limestone locks (inaudible). This works best for wonderful delicacies, wonderful purity and at the same time, great layers. So we have a lot of flavour and the wine feels very heavy. And also, near the county we have this amazing acidity.

Natalie: Right, and do you think that’s a key reason why this Pinot Noir pairs well with pizza? Is it the acidity that’s working, say with, tangy tomato sauce, that’s part of pizza? Why do they pair so well?

Norm: Well I think, you know, you look at Tuscany and the foundation of their cooking is the tomato and they’ve got (inaudible) that’s got amazing acidity and it works. And with our pizzas, they’re primarily some (inaudible)-based sauce, there’s sweetness and there’s brightness to that. And the acidity in our Pinot just lifts all the flavour and brings it together nicely.

Natalie: And what would you say, both of you, question for both of you. Norm’s Pinot Noir, which I think is one of the flagship wines in Canada, that’s just overkill for pizza, like it’s this out of whack, shabby chic kind of combo. What are you doing pairing it with pizza, why not duck a l’orange? Or something more fancy?

Norm: You know, pizza is a bit like a sandwich. To make a great sandwich, it’s really hard, and we brought out the two best pizza chefs in Toronto, they worked in Italy, they worked in (inaudible), they worked in (inaudible). So we’re making something that is so simply beautiful and it’s something that we can do on our patio and everyone loves pizza. So now do pizza and Pinot on the patio, it is good for the shabby chic, but it is what it is, a great pizza everyone loves and works well with Pinot, just works beautiful with Pinot.

Joe: And make no mistake about it, we’ve had this Pinot with other meals at home but there’s nothing better than sitting out on the patio in the sun with pizza and Pinot, as Norm says.

Natalie: Ah, awesome. And Joe what is your favorite type of Norm’s pizza that you like with this Pinot Noir?

Joe: I like a red sauce because it actually matched right in, but I think you had seven  different pizzas out there. But for me its red sauce and a little bit of pepperoni and vegetables and actually right now we have a pizza right in front of us.

Norm: My favorite is sausage pizza. It’s made with meat in the county, it’s made by (inaudible), recognizable both by the LCBO and as a sausage curator. So he has worked some (inaudible) until he’s made the sausage come out in the wine. And the sausage pizza has been huge here in the summer.

Natalie: Wow, and you mentioned you have a pizza there with you. Can you hold it up and show us and make our mouths water even more?

Natalie: Wow, you’ve done your job. Tell us, too, Norm, about the way you adapt the pizza dough. You were mentioning to me via email a while back, it depends on the humidity and the temperature of the day? How does that affect what kind of preparation you give the pizza?

Norm: We work on the basis that it’s going to be dry on Saturdays and Sundays. We make the dough on Thursdays so it works beautiful on Friday. When we hit Saturday, then it becomes a little trickier, how quick the dough comes out of the fridge and bouncing it and then able to run it to the kitchen.

The guy has just got it and the super humid days, all hot, he brings the dough out, not as fast as we do on cooler days when it’s very, very dry. When they stretch the dough, it’s in perfect precision and the dough is so critical, very much like the sandwich. You can have the best fillings on the sandwich and terrible bread then you have a terrible sandwich. The dough’s absolutely critical.

Natalie: It is, even for me when I go to a restaurant the bread is the canary of the mind, the first tell if this is going to be a good meal or not. You know it’s foundational. But bread and wine, you can’t get more foundational than that, too.

Before we wrap up this part of our conversation, guys, tell me Norm, how did you get the idea to have an outdoor, wood-burning oven right on the site of the winery? Was it just a passion for pizza or when did that happen?

Norm: I’ve always loved a great pizza and I decided I’ve been working in (inaudible)  for a long time there’s something I want to do really, really well. And everyone loves pizza and pizza, you know, is the heart of that and pasta in Italy are the two foundations. Everyone loves it. Let’s build a beautiful oven that (inaudible). Let’s do this and make sure we do one thing right. And that was the idea and we actually built the oven four summers ago. We had it ready in August and there was a lot of pressure to open it, but we just weren’t ready. So we want (inaudible) to ensure that everything in place, that when we opened it we opened it on a very, very hot (inaudible).

Natalie: Wow, terrific idea. So we’re going to wrap up our conversation, this part of it. We’re going to come right back and we’re going to talk more about the county and some other wine-related stuff. So thank you for this part, cheers.

Here’s another post with Norm’s favourite pizza and wine pairings, plus more pictures of that beautiful wood-burning oven.